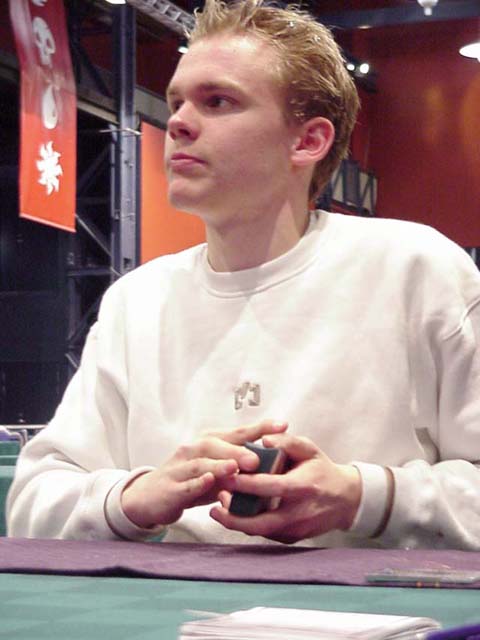 Many of the Swedish players were quite surprised to see Angelin in the Top 8 since he really doesn't play Magic anymore. In fact, the last time he played was at Grand Prix Copenhagen back in June! His opponent is Jos Schreurs from Utrecht in the Netherlands. He currently has two Pro Tours under his belt and now guaranteed a third, thanks to this, his first ever premier event Top 8 finish. Today these two players are running two very different decks, despite sharing two colors. Marcus is green/red/black while Jos is blue/black/red

Marcus won the die roll and elected to play. An easy choice due to the aggressive nature of his R/G/B deck. He started out quickly with a turn two Quirion Explorer and a third turn Fires of Yavimaya. He then tried to play a Cinder Shade but it was Excluded. A Vodalian Zombie then stopped the Swede's ground offensive but he kept attacking through the air with a Vodalian Imp. The Imp was however quickly Terminated and the game came to a stalemate. But it wouldn't last for long. Schreurs played a Hunting Drake returning Marcus's Horned Kavu to the top of his library. A couple of turns later a Breath of Darigaaz by Schreurs cleaned up the entire board, except for the aforementioned Drake. The Drake was then joined by a Stormscape Familiar and together these two flyers beat down Marcus who was drawing nothing but lands. Game one to Jos Schreurs. 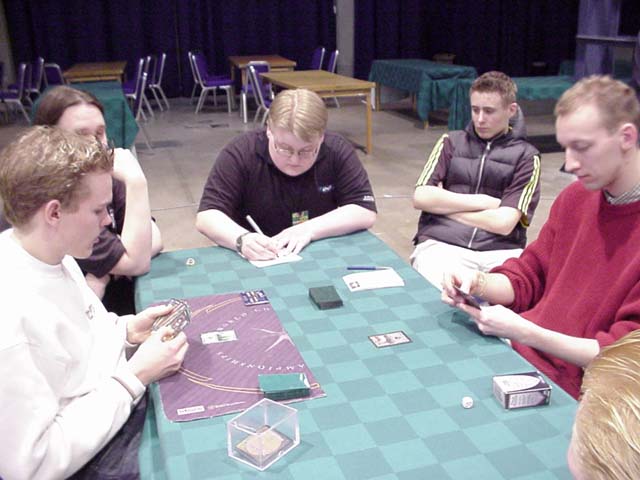 The second game Angelin summoned a third turn Pincer Spider followed by a fourth turn Power Armor. But the Spider was nothing compared to what was going on at Schreurs side of the table. He spent the first four turns by summoning two Stormscape Familiars followed by a Phyrexian Slayer for only two mana! He then cast a Hunting Drake returning the Spider, Angelin's only creature, to the top of his library. Things were indeed looking good for the player from Utrecht and the home favorite was struggling. Angelin had replayed his Pincer Spider but it was quickly Terminated. During the next three turns he desperately tried to summon some creatures, but it was not to be. Here's what happened during the next three turns: 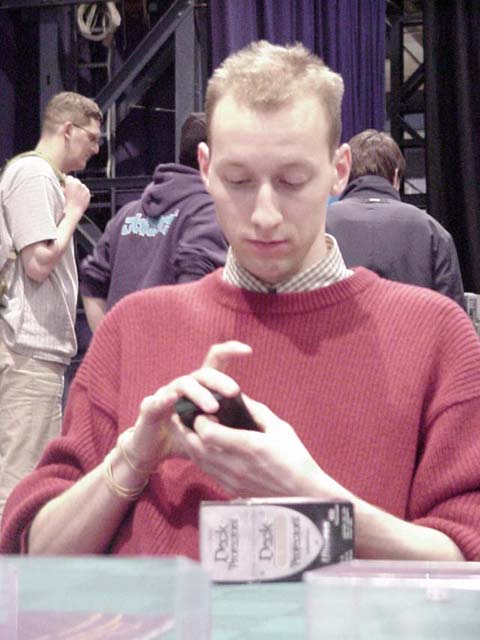 Angelin was now at six life and still had no creatures in play while Schreurs was at 18 and had two Stormscape Familiar and a Hunting Drake on his side of the table. These three attacked for four putting Angelin at two, which was enough for Schreurs to finish him off with a kicked Breath of Darigaaz. Second game and the match to Jos Schreurs.