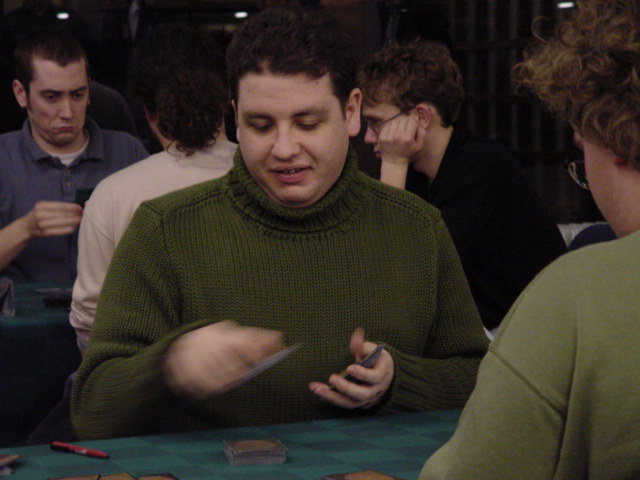 Menno has drafted an aggressive red green black deck and thus chooses to begin. His opening looks good with lands of all colors and he can start very offensively with Thunderscape Apprentice, followed up by a Rage Weaver. Daniel, who plays black and blue, answers with a Ravenous Rats. However, the Rats were no match for the Rage Weaver because of the Apprentice, which can boost it by +1/+1: Daniel goes to seventeen life. A Shoreline Raider played by Daniel is immediately killed using Scorching Lava and the Apprentice pings for one: Daniel is at sixteen. Daniel goes to thirteen and Menno plays another Weaver. Daniel now thinks and thinks and finally does nothing . . . only to play Agonizing Demise on Menno's turn on the Apprentice, which Daniel has identified correctly as the source of his trouble. It pings though and four more combat damage bring Daniel to eight. But he can now safely play Probe with kicker, and stop a Rage Weaver with his Rats. Menno continues his creature rush with a Pincer Spider, sacrificing a land to pay for the kicker cost. Again Daniel thinks very long, which he now follows up by another killer: Tsabo's Decree. Two more damage from the Weaver and Daniel goes to six. But Daniel has a handful of cards and the mana to act: Menno's Kavu is Recoiled and discarded and an Urborg Phantom follows as Daniels first offensive act. Menno's position begins to look awkward, having only a 2/1 on the table. O'Mahoney-Schwartz is at six life, but he summons a Dusk Walker and next turn a 3/3 Attendant. Menno is at eleven when he summons an Elephant out of his Assault/Battery, lets the Rage Weaver gain it Haste and attacks. The Attendant kills the Weaver and Daniel is on three. But Daniel immediately attacks for nine and plays Agonizing Demise with kicker to finish the game.

Never have I seen such thorough shuffling as done by Daniel. His fingers move so fast I cannot figure out his way of doing it. 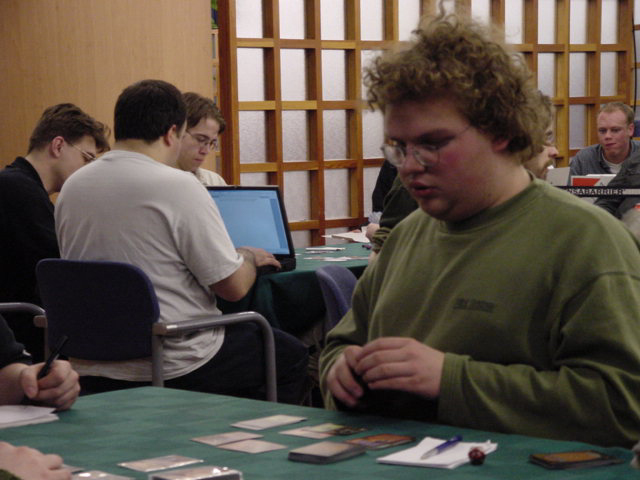 Menno is not entirely satisfied with only two lands (a Mountain and a Swamp) in it's opening hand. He cannot play a Barbarian in turn two, but instead plays Rage Weaver. Daniel lays a second land. Menno, who drew Thunderscape Apprentice, plays it and another Rage Weaver. Daniel summons a Shoreline Raider and on the following turn kills an attacking Weaver. Daniel is now at fifteen, but the Apprentice is no threat because of Menno's missing forest. Daniel Recovers the Shoreline Raider, Menno hits him to twelve. Now Daniel plays the Attendant again and Menno's creatures look puny. While Menno waits for a Forest, Daniel Exotic Curses the Apprentice, attacks and plays Mourning to reduce the Rage Weaver to 0/1. Next turn Menno finally draws a green mana source, Shivan Oasis: he has to wait another turn. Daniel attacks to bring him to fourteen and plays the Shoreline Raider again. Mourning goes backs to his hand and Cursed Flesh finishes the Rage Weaver. Menno summons a kicked Pouncing Kavu, 3/3 First Strike. Daniel plays Mourning again and can now safely attack with both creatures. Menno cannot even block the Shoreline Raider because of Protection from Kavu, and he drops to nine life. Menno draws a Pincer Spider and plays it kicked. Daniel Recoils it and plays a Viashino Grappler in addition. Menno, who is now at four, draws Zap, kills the Grappler and plays the Spider again, this time without kicker. But Daniel has an Agonizing Demise ready and so Menno is dead.

Daniel, his two Agonizing Demises and two Tsabo's Decrees go through to the semi-finals.