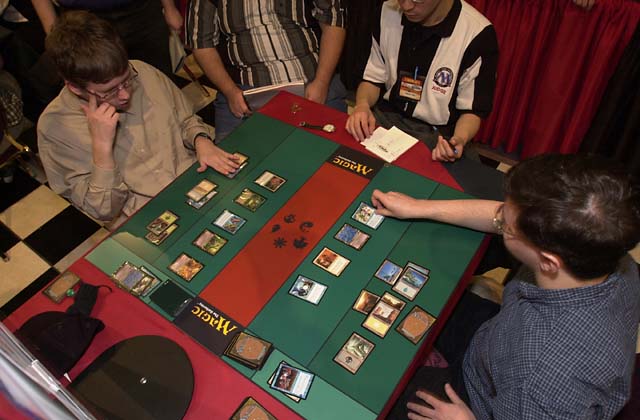 Mike Pustilnik, or Mikey P to his adoring fans, is really on a hot streak. He finished 6th in Chicago, and has had fairly high finishes in his last three Grand Prix performances. He's devoting himself full time to Magic, and that devotion is paying serious dividends. Lawrence Creech is a new face to the Top 8 of a Pro Tour, but he did finish 28th in Chicago, so winning isn't foreign to him. Both players had awkward drafts, and were both forced into playing three colors. Mike is playing blue/white/black, and Creech is playing blue/white/green. The match is best of five, so the first player to three wins.

Game One began with the basics of a good blue/white base deck - from both players. Mikey opened with a Stormscape Apprentice and a Galina's Knight, while Creech played a Sky Weaver. The Sky Weaver and Galina's Knight bumped heads and traded, and the Stormscape Apprentice got in some little beats as both played tried to maximize their countermagic ability. When Mike tried to play a Sky Weaver, it was met with Prohibit. Mikey had just been baiting the counter, though, and played a Benalish Trappers immediately afterwards. Over the next couple of turns Creech dropped a Benalish Heralds and Angelic Shield, but he never got to draw a card from the Heralds as they were tapped during each of his upkeeps. He could have used the drawing ability in response, but he did not. This was a mistake. He was mana light - stuck at just 4 mana, and his draw phases weren't bringing him any more land, so he needed to draw as many cards as possible to try and find his land. Instead, he simply played the spells his normal draw phase was bringing him. A Charging Troll was met with Exclude, and Jade Leech was Delivered back to his hand. Once Stormscape Master hit the board from Mikey, Creech knew the game was all but over. 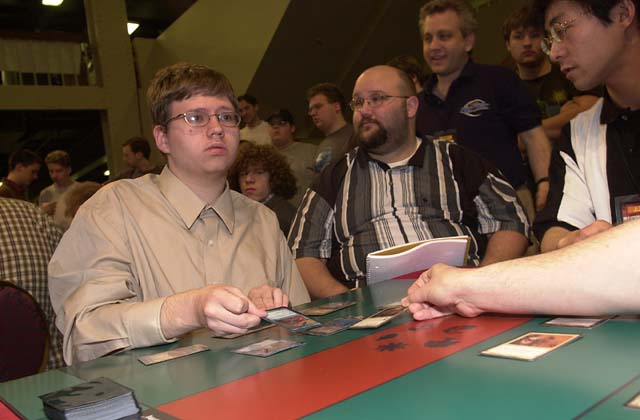 In game 2, the players both opened with Galina's Knight. Creech followed that up with a Benalish Trapper and Tidal Visionary, while Mike could only summon a Spirit Weaver. Creech put a Wings of Hope on his Galina's Knight and started to serve up the beats. When Mike tried to Shackles the Knight, Lawrence Repulsed it, and the Shackles went into the graveyard. On Lawrence's turn, he played out a Pincer Spider and an Angelic Shield. Had he been more patient, he could have laid the Pincer Spider on the next turn and paid kicker, but instead, all he could do was play a Charging Troll without the ability to regenerate. It didn't matter, since Mikey P didn't have an immediate answer for the Troll. Then Creech decided, it seemed, to lose this game as well. Several turns in a row he just didn't attack with the Charging Troll. Mike didn't have any defenses lined up, having tapped out repeatedly for Faerie Squadron, Probe, and Vodalian Serpent, all with kicker. There were three turns where Creech could have attacked and beat down on Pustilnik, but instead simply passed the turn. It is unclear what he was waiting for, but he did draw another bomb in Sabertooth Nishoba, but at that point it wasn't as relevant, as Mikey P had built up his defenses, and had a Benalish Trapper he could use to tap down the Beast. When Mikey P summoned the Stormscape Master, Creech again conceded.

In game 3, both players started out by playing Stormscape Apprentices, and Mikey followed up with a Benalish Trapper and a Vodalian Zombie. Lawrence, obviously frustrated with his performance in the first two games, decided to get aggressive this game, and threw down a Wings of Hope on the Charging Troll. He beat turn after turn, and when it finally was Delivered, the damage had been done, and a few random fliers finished the job. Creech, was visibly agitated during this game, and slammed down his cards when playing them. 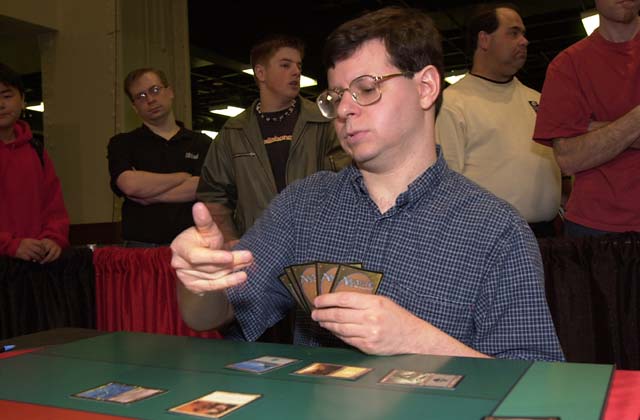 This game was odd. Both players were missing mana - Pustilnik white, Creech blue. Both players said "go", turn after turn. Pustilnik's first creature was a Vodalian Serpent with kicker. At that point, it was the only non land permanent on the board. Mikey Excluded a Creech attempt at Razorfoot Griffin, and drew into a Slinking Serpent, Vodalian Zombie, and Stormscape Apprentice. Creech drew a Chromatic Sphere and used it to play a Stormscape Apprentice which he paired up with a Pincer Spider. It didn't matter, though.