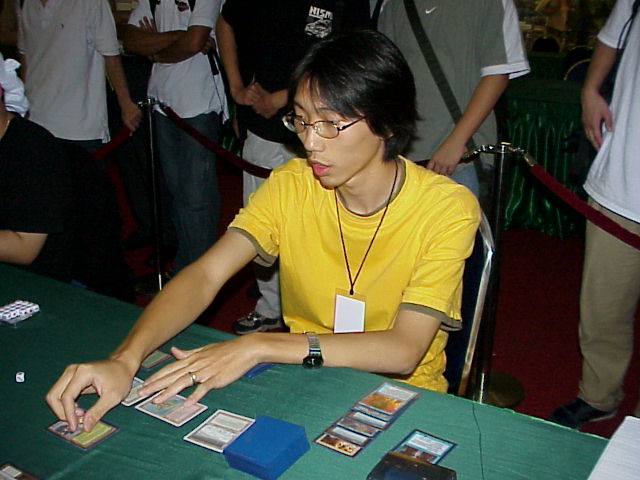 Going into the quarterfinals, Nick Wong could only feel pessimistic about his chances. "I've got a bad matchup," he said, "it would be very lucky for me to win." And it was a bad matchup. Playing his Trix deck, Nick would have to face Tzu-Ching Kuo, of Taiwan, playing Oath. Oath was one of the decks built to beat Trix - with access to blue counterspells and the powerhouse Pyroblast, which can wreck Trix in several ways. Tzu-Ching had been beating Trix all day and felt very happy going into this match.

Kuo won the die roll and chose to play first. Wong played a first turn Duress, snatching a Seal of Cleansing - a huge problem card for his deck. The rest of Tzu-Ching's hand was poor against Nick, so he was pleasantly surprised. Without counterspells to disrupt his game plan, Nick could cakewalk. He developed quickly, Demonic Consultationing for a Necropotence, then playing a Mox Diamond and a Necropotence on his next turn. Kuo had drawn an Annul, which he used. Again, Wong went for the Necro, this time Vampiric Tutoring for it. But, Tzu-Ching had drawn a Counterspell, and again he neutralized it. On his next turn, Nick Consulted for a third Necro. Losing one in his top six cards, Wong gulped a breath of air in preparation for a very bad Consult. Luckily, it didn't happen - Wong found the Necro four or five cards down. When he cast this one, Kuo pitched his Morphling to Force of Will. Nick sighed as he watched his last card-drawer disappear, unable to prevent it. 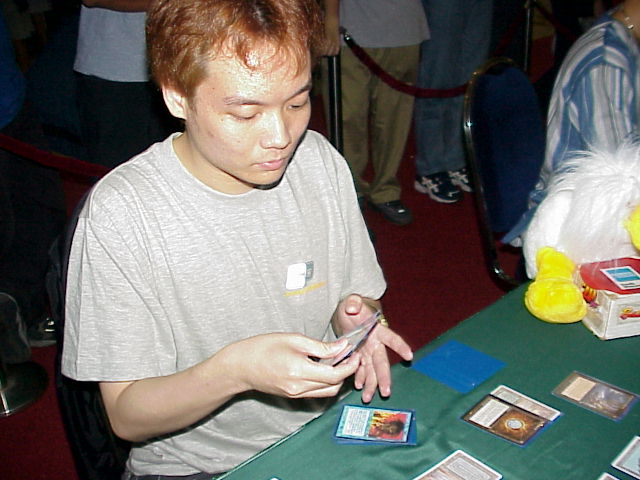 Without the Necros, the game became very different. Kuo played a Treetop Village and began attacking with it. Wong used his third Consult to fish out an Illusions of Grandeur, which he played on the next turn. Taking advantage of Wong's tapping out, Kuo activated and Swords to Plowshared his own Treetop Village, making sure that Wong would have to combo him twice, which was unlikely since Wong had already Consulted away three of his four Illusions. Nick Donated the Illusions over with no resistance, and Tzu-Ching didn't even try to pay its upkeep. He went down to two life and randomly played an Oath of Druids, even though Wong had no creatures in his deck. He played a second Village, while Wong tried to set up his kill. There was only one more way in which Wong could win. Periodically using Duresses to check Kuo's hand, Wong finally threw down the game-winning combo.

Firestorm and two cards. With a smile, the two competitors began to sideboard. 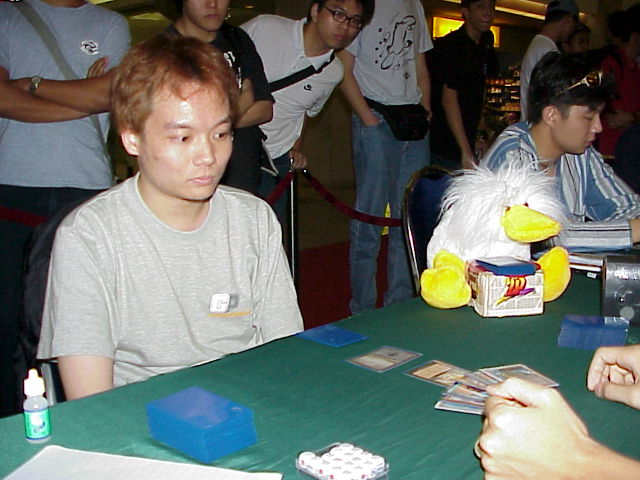 Game two was marked by Wong repeatedly barely missing what he needed to do. Kuo's hand was freaking amazing, with two Mana Leaks, two Pyroblasts, an Annul and two Volcanic Islands. Wong played a turn one Duress - and his eyes almost popped out of his head. He took a Mana Leak and passed the turn. He played a second Swamp and engaged in a bit of a fiasco. At the end of Kuo's turn, he played Vampiric Tutor, hunting down another Duress. While he had the Duress sitting next to his deck, he Consulted, in response to the Tutor, naming Force of Will. It quickly became obvious to him that the Tutor had already resolved, so he wanted to take the Consult back. Kuo called Head Judge Mountain Hung who ruled that the spells must resolve as they had been announced, and Nick lost his Tutor card, picking up a Force of Will about fifteen cards deep. In good form, he drew a Duress, which was Mana Leaked. Wong was land light, so he Consulted for a Swamp. The whole time, Tzu-Ching was amassing more control cards while Nick tried to punch through. He Duressed away a Pyroblast and FINALLY got a Necro through, drawing a mass of cards. Kuo was bluffing well, knowing that Wong was out of Duresses, and he was able to win a counter war over Illusions with a Pyroblast - while Illusions was in play.

Game three was more of the same for Wong, who was not able to put together any disruption or combo power, despite Kuo mulliganing. He Tutored and Consulted very carefully, after the last game's problems, but was not able to get anything going. The whole time, Kuo built up a steady stream of counters and Villages, which he used to pound Wong into the ground.