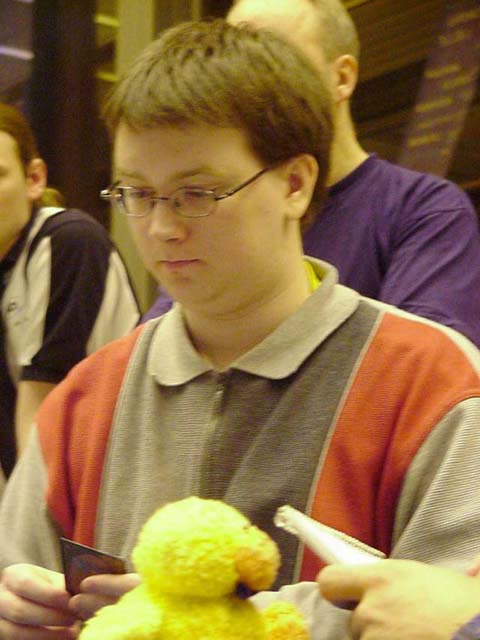 In this match, broken Boeken played broken Jens. Jens received his name after winning three out of the four scheduled magic events at the largest gaming convention in Sweden last spring. Both players were silent during the shuffling trying to focus on the important match. Jens won the coin flip and chose to draw increasing his chances of a good mana draw with his three-colored deck.

Noah got a fast start with a second turn Nomadic Elf and a third turn Quirion Explorer after mulliganing a non-land hand. Jens on the other hand was forced to probe third turn digging deeper into his deck in order to find the Swamp he was missing. His fourth turn Ardent Soldier was Strafed by Noah and a Serpentine Kavu joined Noah's growing army.

Jens managed to stall the attack with an Urborg Emissary and an Attendant joined the defense on his side. This gave Noah the opportunity to kill both creatures with a Thornscape Battlemage thanks to his Quirion Explorer providing white mana.

Jens sacrificed the Attendant and Recoiled the Serpentine Kavu. A Hunting Drake delayed the match one turn further but he couldn't find an answer to the big green creature.

Once again Jens chose to draw first and once again Noah chose to mulligan his hand, being unhappy with his six lands and Quirion Elves. Noah happily played his second turn Rogue Kavu but Jens had a Galina's Knight to stop Noah. Noah stalled on two lands and played a Yavimaya Barbarian and a Quirion Explorer. Jens used a Repulse to slow him down and to dig deeper into his deck in order to find black mana. Jens played a Benalish Heralds but Noah had several answers for it with a hand containing Agonizing Demise, Gaea's Might and Darigaaz's Charm.

A mighty Barbarian killed the Heralds and Serpentine Kavu joined Noah. When Noah chose to kill the Urborg Emissary that had bounced the Serpentine Kavu he didn't know what was coming. Jens played Hypnotic Cloud forcing Noah to discard: Serpentine Kavu, Ancient Kavu and Yavimaya Barbarian. Noah used his Agonizing Demise to kill the Galina's Knight protecting Jens and beat him down to seven lives with Horned Kavu.

Over the next couple of turns, Jens stabilized with the help of Mourning, Hunting Drake and Disciple of Kangee. A pretty good probe for Jens gave him a Vodalian Zombie and a Hobble to strengthen his board position. Noah died a couple of turns later when he had no answer to a Duskwalker and Ardent Soldier that Jens played.

Doubting his deck and his own ability to draw lands Noah forced Jens to start. Yavimaya Barbarian and Rogue Kavu brought Jens down to 14 with the help of Gaea's Might and Darigaaz's Charm killing two potential blockers. Jens probed with kicker, played Hunting Drake, Benalish Heralds and Vodalian Zombie during the next three rounds gradually evening out the board situation.

With Jens on nine lives, Noah knocked on his deck to find a good answer but unfortunately for him he drew 4 lands in a row and was killed by Hunting Drake enchanted with Strength of Unity.