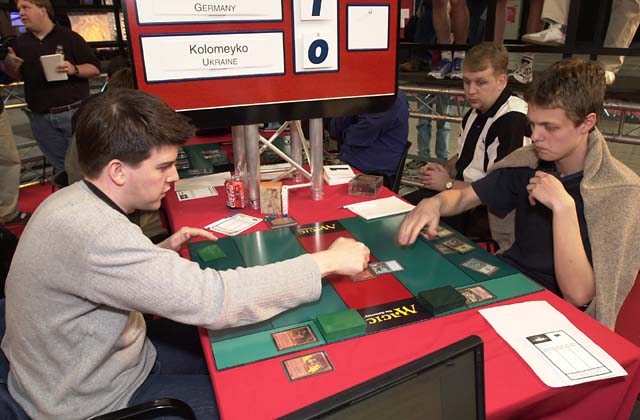 Mello kept a creatureless hand that featured three removal spells and four land. Kolomeyko, who won the die roll but chose to draw, kept a slow hand with his creatures being Aurora Griffin and Serpentine Kavu.

Mello drew a Kavu Aggressor in time to cast it on turn 3, then followed it up with a Phyrexian Slayer. Kolomeyko had no play until turn 4, when he cast a Razorfoot Griffin, hoping to stop an attack. Of course, the first creature never lives against a red-black deck. Scorching Lava blew the Griffin right out of the sky. To add insult to injury, Mello cast a Ravenous Rats after having attacked for five.

Terminate took out a Serpentine Kavu, and Mello's creatures walked over its bloody remains to reduce Kolomeyko's life total to six.

In a last-ditch effort, Kolomeyko summoned a Stormscape Apprentice and Aurora Griffin. Mello cast Singe on the tapper, summoned a Pouncing Kavu on his turn and attacked for the kill.

Mello boarded out a Chromatic Sphere for an extra Singe, expecting to see a lot more one-toughness creatures than he did in the first game. Kolomeyko's sideboarding strategy was a lot less comprehensive. He took out Aurora Griffin and two Rampant Elephants for two Root Greevils and Fight or Flight, leaving a Sunscape Familiar, which could help further speed up his deck and block early threats, in the board.

Both players kept their hand in the second game once again. Kolomeyko had a first turn creature play this time, casting a Stormscape Apprentice. Mello played a Rage Weaver, prompting Kolomeyko to begin using his tapper. Caldera Kavu and Rainbow Crow entered play on opposite sides of the table.

Mello sent his two creatures into the Red Zone, and Kolomeyko unexpectedly blocked Rage Weaver with his Apprentice. Mello replaced the Weaver with Kavu Aggressor.

On the following turn, Kolomeyko traded his Crow for the Aggressor and used Treva's Charm to remove Caldera Kavu from the game. Mello finally gave up his tempo advantage in favor of card economy at this point, spending the turn to Recover the Aggressor.

Kolomeyko summoned a Stone Kavu, only to have it Annihilated. His next fat creature, a Serpentine Kavu, would have met a similar fate at the hands of Shivan Emissary, but Mello chose to cast Kavu Aggressor instead, then use his remaining mana to Backlash it during Kolomeyko's upkeep.

Kolomeyko cast Fight or Flight - the card actually helped him a bit, as Mello was holding a Pouncing Kavu he could have cast this turn. Instead, the German player opted to cast a Smoldering Tar. A Singe took care of Sunscape Apprentice, then Shivan Emissary finally got his man, leaving the board clear for Kavu Aggressor to come on in.

Down to seven life and with no options in hand, Kolomeyko scooped up his cards.

Kolomeyko opted to play first in this game. His opening hand featured only one land (though it had both of the ill-fated Root Greevils) so he took a mulligan. His new hand offered four lands, a Samite Pilgrim and an Obsidian Acolyte.

Mello had Swamps and red cards only, but his hand would be good once he drew a Mountain, so he kept. This gambit cost him, as Kolomeyko got his two tricky 1/1 critters online before Mello had an opportunity to cast one of his Singes.

Mello summoned Kavu Aggressor, prompting Kolomeyko to keep his creatures back. He then cast Shivan Emissary, taking out the Pilgrim. Kolomeyko finally drew one of his better cards, casting Fact or Fiction to reveal a Fertile Ground, Thornscape Familiar, Razorfoot Griffin, Forest, and Aggressive Urge.

Mello took about two minutes to decide on the split. As a result, Kolomeyko took the Razorfoot Griffin and Aggressive Urge pile. He then summoned the Griffin. This once, Mello had no removal spell capable of dealing with the 2/2 flyer in his hand, so he summoned more creatures - Caldera Kavu and Rage Weaver - instead.

Kolomeyko cast Hobble on Caldera Kavu - the only creature that could get past Razorfoot Griffin at the moment, but Mello was not fazed. He played his seventh land and cast another Kavu Aggressor - with kicker this time.

Kolomeyko summoned a Stone Kavu, and Mello to continue the stall. Rather than risk combat with only two lands untapped, Kolomeyko took four damage. Mello summoned yet another Kavu - of Pouncing variety this time, and passed the turn.

Although Mello had twice as many creatures in play, he could not realistically punch through Kolomeyko's defenses until he drew a removal spell. Kolomeyko, on the other hand, could not even think of attacking yet. Or could he? Kolomeyko sent in the Griffin, then summoned another large beast - a Serpentine Kavu, to safeguard on the ground.

Mello finally got some game when he drew and played a Phyrexian Slayer. Its ability would let it walk right by Razorfoot Griffin. Mello used his Rage Weaver to give Slayer haste and attack right away.

Griffin and Slayer were off to the races. A problem with this situation for Kolomeyko was that Mello could just Alpha Strike (attack with all of his creatures) in just a few turns. 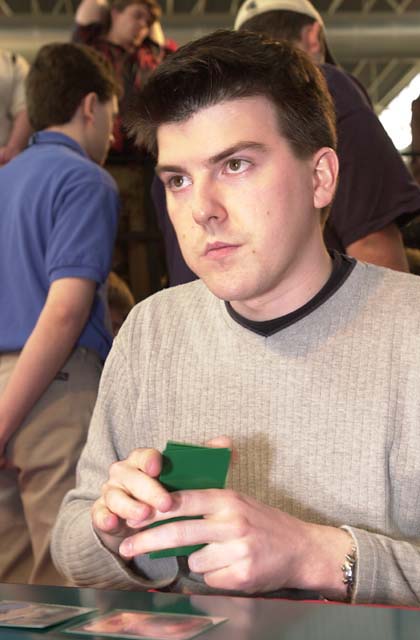 Trying to find some answers, Kolomeyko used his Aggressive Urge to deal an extra point of damage to Mello with the Griffin. It paid off, as he drew and cast Stormscape Apprentice. Mello, realizing that his Slayer could not be attacking for very much longer now, used a Singe at the end of Kolomeyko's turn to make him tap his Sunscape Apprentice, untapped, and sent all of his creatures except the Hobbled Caldera Kavu into the red zone.

Kolomeyko had no tricks in hand. He assigned blockers, dealing exactly six points of damage and leaving Kolomeyko at four. It would have been game and match right there and then if not for an Obsidian Acolyte, as Mello was holding a Backlash and Kolomeyko still had a four-power creature in play. As it was, Kolomeyko got to untap, but could not retaliate with his own Alpha Strike attack. He sent in the Griffin for three, once again pumping it with Apprentice's ability. Kolomeyko then summoned a Noble Panther. He got the ground under control again, but was attacked down to two by Phyrexian Slayer. He needed to draw Tangle to have a chance at a comeback.

He drew Orim's Touch instead. He could now prevent Slayer damage and retaliate by attacking for the kill! He let Mello put damage on the stack and responded by playing Orim's Touch with kicker. In response, Mello cast Scorching Lava he just drew, dealing the last two damage to Kolomeyko to win game, and match.