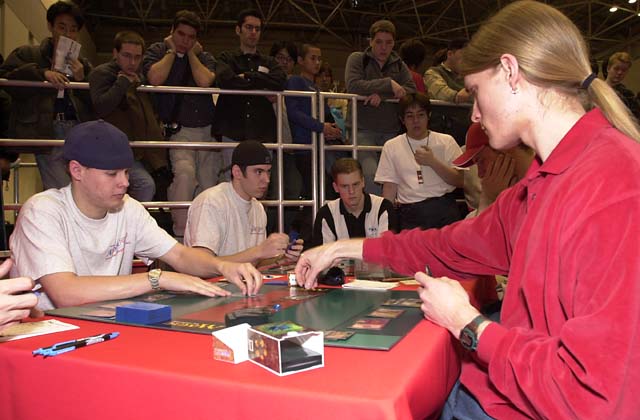 Phil and Lucas are friends from the US, and worked on their deck together. Phil's deck is very similar to Lucas's, with the greatest difference being that Phil has 2 Keldon Necropolis and only 24 total land, while Lucas has only one Keldon Necropolis and 25 total land. "If I get Necropolis lock on him he has only 22 land, whereas if he gets Necropolis lock on me, I have 24 land," commented Lucas after the match. The newest rules question popped up again, which way the mat will face, because each players deck must be on the same side of the mat. Lucas won the flip and chose to play, while Phil chose his deck to be on his right. They each had their sleeves checked and talked.

"Are you nervous?" asked Phil.
"I'm excited. You?"
"Kinda peaceful"
"If I was playing Go-mar, ahhhh, then I'd be nervous"

Lucas parised his hand, then kept and played a Mountain. Phil dropped a Keldon Necropolis to lock Lucas out of playing his. Lucas untapped and dropped a land and a Blurred Mongoose. Phil could only play another Mountain. Lucas attacked and played another Blurred Mongoose. Phil still could only play another Mountain. He needed a Forest to be able to get in the game and play his own creatures. Lucas attacked with both Mongooses, and dropped two more blurred mongoose. Phil untapped and cast the Ghitu Fire in his hand in futility, because he couldn't use it to kill any of the Mongooses. Lucas attacked again, and then Phil drew his next card and scooped.

Both players sideboard out just about the same cards, Kavu Runner and Raging Kavu, but Lucas took out one Skizzik. They both brought in Jade Leech and Flametongue Kavu. The judge counted their sideboards and game 2 began. 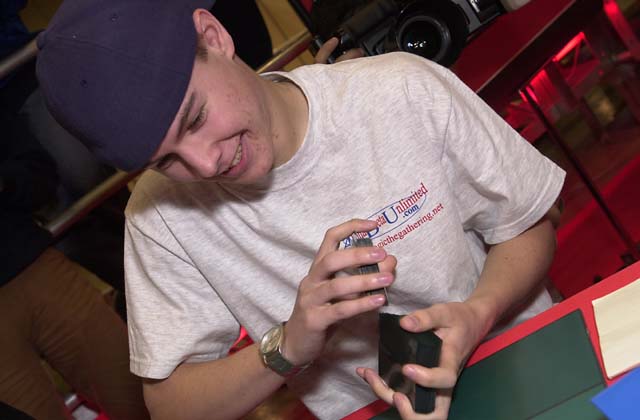 Phil played first and got his own turn two Blurred Mongoose. Lucas cast a Thornscape Familiar on his turn. Phil untapped, played a Mountain, and said go.

"Sure you're done?" asked Lucas, wondering why Phil didn't attack. Lucas attacked and Phil traded creatures by blocking. Lucas passed the turn and waited until Phil did nothing on his turn to cast Raging Kavu as an instant. Lucas attacked and dropped another land. Phil dropped his fifth land and cast Kavu Titan with kicker. The 5/5 creatures in this match are very important, because it is very hard for one player or the other to kill them without using up another 5/5 or a very valuable Ghitu Fire. Phil makes a mess with beads trying to get the +1/+1 counters from the kicker.

"Can I go yet?" joked Lucas. Lucas untapped and attacked, and cast his own Kavu Titan with kicker. Phil took his turn, attacked with his Kavu Titan, and got through for five, and cast a Flametongue Kavu killing the Raging Kavu. On his turn, Lucas attacked unblocked for 5 and cast another Kavu Titan with kicker. Phil attacked with only his Flametongue Kavu, which Lucas hesitantly blocked with his untapped Titan. Phil used his Keldon Necropolis to finish off the Titan. Lucas played the Skizzik he had been holding, and attacked with Skizzik and Kavu Titan, and got his Titan blocked sending Phil to 4 life, and his Titan to the graveyard. Phil untapped, drew a Flametongue Kavu off the top to kill Skizzik, and played it and a Jade Leech.

"What are you at? Four? Just checking," commented Lucas as he untapped and cast Ghitu Fire for four to kill Phil.

Neither player sideboarded, both content after this much play that they had done it right. Phil played first, and Lucas cast the first Blurred Mongoose on turn 2. Phil took a hit from the Mongoose before dropping a Jade Leech. Lucas cast a Raging Kavu and the end of that turn, and then attacked with it on his turn as well as his mongoose. Phil blocked the Mongoose with his Jade Leech. Lucas Urza's Raged the Jade Leech and dropped a land. Phil cast a Flametongue Kavu killing the Raging Kavu, leaving him with the only creature on the board. Lucas cast Kavu Titan with the kicker on his turn swinging the game back to his side. 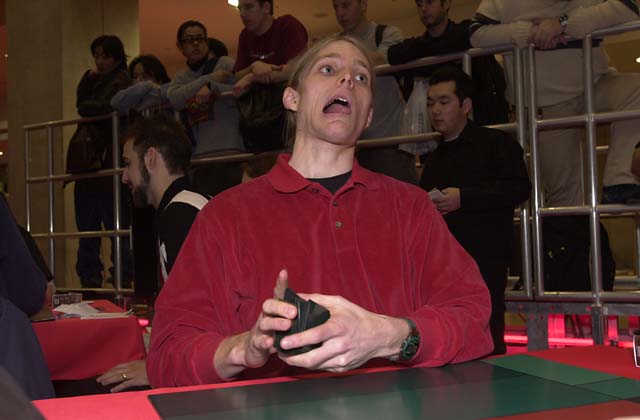 He had Skizzik, Urza's Rage, Kavu Titan and Thornscape Familiar in hand as well as the Shivan Oasis, and four open lands on the board, two Forests, a Mountain, and a Keldon Necropolis. Lucas was at 11 life. "Land or no?" questioned Lucas. Phil attacked with both of his creatures. Lucas blocked the Flametongue Kavu with his Blurred Mongoose and went to 6 life. Phil played the Shivan Oasis and passed the turn. Lucas cast Urza's Rage at the end of Phil's turn putting him to 7, then untapped and showed Phil his Ghitu Fire.

Afterwards Lucas commented, "Sorry, that was a bad loss. I'm [just] luckier than he is."