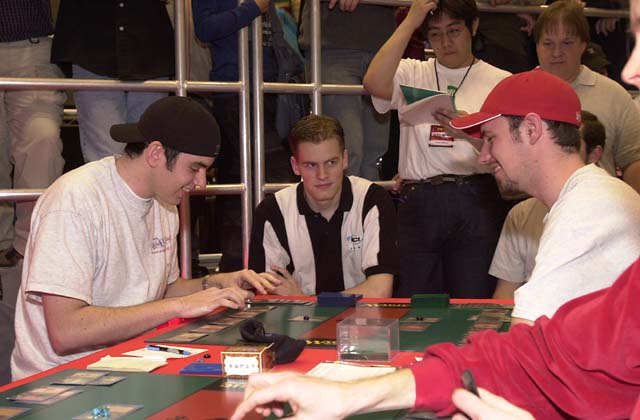 This quarterfinal match was between Ryan Fuller and Chris Benafel, both friends and members of the Team AlphaBetaUnlimited.com. They were playing nearly identical, aggressive Red/Green beatdown decks. Ryan Fuller went undefeated in the Swiss rounds, entering the Top 8 as the first seed with a flawless 14-0 record, while Chris Benafel squeaked in with an 11-3 record as the eighth seed. In addition to these two, nine others played the deck with only three of them missing the cut to the second day. Eight players of the deck made the Top 64, five made the Top 16, and four made the Top 8. This particular Red/Green deck was certainly powerful and both players knew it well. It was bound to be a close match, decided either by who gets off to a faster start or if it reached the late game, who could cast the most 5/5 creatures.

Chris Benafel won the die roll and chose to play first. Both players were forced to take a mulligan, keeping mediocre hands for fear that they would get worse at five cards. Benafel began with a Shivan Oasis and Fuller responded with a Keldon Necropolis. Benafel then failed to lay a land on turn two while Fuller played a Shivan Oasis, unable to cast a threat himself. On the third turn, Chris topdecked a Shivan Oasis, giving him two land, although still unable to cast any spells. Ryan Fuller, despite going second, cast the first threat on his turn three, with a Thornscape Familiar. He then followed this up with a Blurred Mongoose on his fourth turn, but neither damaged Benafel, as Chris was able to Ghitu Fire the Familiar and play his own Mongoose to block Fuller's. Things continued in this fashion for a number of turns, with neither player able to mount any significant threat, until Ryan Fuller drew his fifth land and cast a Kavu Titan with the kicker. Benafel was able to create one of his own on the following turn, but it was promptly killed by Fuller's Ghitu Fire and Benafel was put on the defensive. Over the next few turns, Ryan Fuller cast two Skizziks with the kicker and his attackers became too much for Benafel, knocking his life down low enough that Fuller was able to win with a Urza's Rage and a Ghitu Fire. 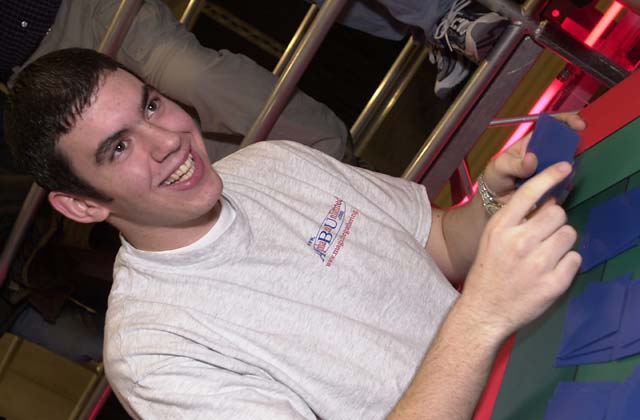 Having lost the first game, Chris Benafel chose to play first. Once again, Ryan Fuller was forced to mulligan down to six, although Chris Benafel was spared that disadvantage this game, keeping his initial hand of seven cards. Chris got off to a roaring start with a second turn Blurred Mongoose and a third turn Raging Kavu, knocking Fuller's life total down to 15. Fuller managed to Ghitu Fire the Raging Kavu on his next turn, but Benafel continued to put on the pressure by attacking and casting a Thornscape Battlemage with the kicker, doing two additional damage to Fuller. While Fuller still had a number of good cards to play, like Jade Leech and Skizzik, he was unable to mount a defense quick enough to stop Benafel's growing horde of attackers. Soon, Chris Benafel was able to clear away Fuller's blockers and come in for the kill.

For the first time in the match, Fuller was given the option whether to play or draw first, and he chose to play first. The match was tied at 1-1, each of them needing two more wins to secure the victory. Ryan Fuller struggled early on, missing a land drop on the third turn and then again on the fifth turn. Being stuck at three lands, he was only able to cast creatures like Thornscape Familiar and Raging Kavu, all of which were quickly killed by Benafel's Ghitu Fires and Flametongue Kavu. Failing to draw a fourth land for the entire match, Ryan Fuller finally conceded when he was at four life and Benafel was able to cast a Kavu Titan with the kicker.

Throughout the match, the players had been joking with each other, with Benafel doing a fairly good job of predicting the contents of Ryan Fuller's hand (in the words of Fuller, "to show everyone how smart he was"). Now down 1-2, Ryan had a much more serious expression on his face and he seemed unamused by Benafel's joking. As they began this potentially decisive game, Chris Benafel said to Ryan, "I'm glad you finally put your game face on," referring to Fuller's newfound seriousness. Fuller once again chose to play first and got off to a quick start with a second turn Thornscape Familiar, followed up by a third turn Flametongue Kavu, which was used to kill Benafel's newly cast Familiar. From there, it didn't get much better for Benafel, as he was forever on the defensive, struggling to keep up with Fuller's early drops as well as his later Skizzik and kicked Kavu Titan. It was only a matter of time before Chris Benafel succumbed to the assault and Fuller quickly finished off his opponent with a Ghitu Fire, leaving the match tied 2-2. 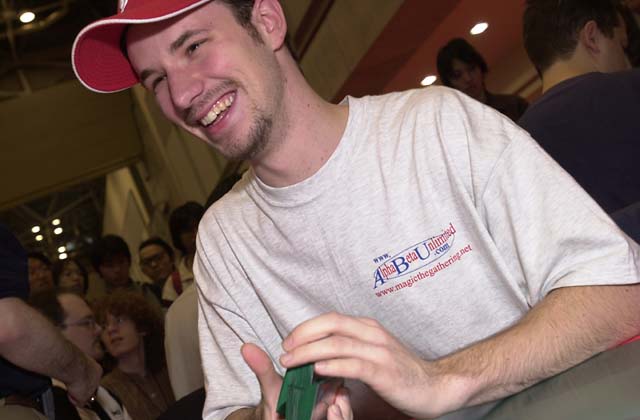 Chris Benafel chose to play first in this final game and both players admitted that this gave Chris a tremendous advantage. Chris began with a turn two Thornscape Familiar, which soon ran into Ryan Fuller's Blurred Mongoose. Neither player seemed able to do much damage as Ryan, stuck at three land, was able to throw multiple Raging Kavus into the path of the oncoming 2/1's. What seemed like it could be a close match soon became quite lopsided, as Chris Benafel reached five land and cast a Kavu Titan with the kicker. Fuller, still at three land, responded with a feeble Thornscape Familiar followed by another, both of which soon became victims of Benafel's Flametongue Kavu. Ryan finally conceded at four life, realizing he had no way to deal with Chris' Titan and two Flametongues who were preparing to run him down.