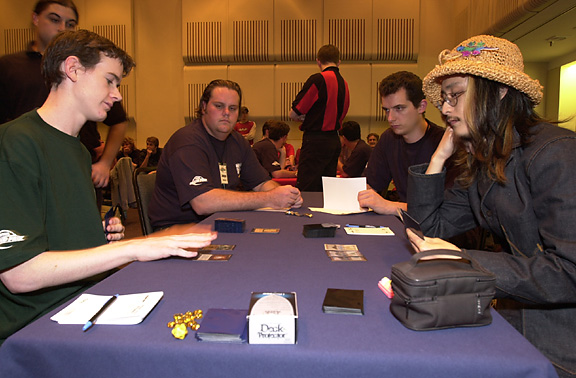 Both players chose to mulligan to begin the match. Nakamura's second hand consisted of three Impulses, Wasteland, Island and Gush. Allen Duressed an Impulse and Nakamura Wasted his Underground Sea on the off chance the mulligan left him light on land. With only a Swamp in play, Allen cast a Mox Diamond that Nakamura considered countering, but he let it through and lost the Arcane to Duress.

Allen ran out of steam with only two sources of mana just as Nakamura started to take off. Casting Exploration allowed him to Gush using the alternate casting cost and immediately play the two lands again. He did this twice and played a second Exploration and attempted a third Gush. Allen Force of Willed it discarding Donate and Nakamura Force of Willed that (discarding Arcane Denial) to get the Gush through. This was likely the mistake of the game as it was unlikely that any two cards Nakamura would draw would be as good as the Force of Will and Arcane Denial that he lost. Nakamura Time Warped and cast a *fourth* Gush and a third Exploration but despite all the Gushing he ended the turn with just three basic land in hand.

Showing true high-level skill, Allen drew Necropotence off the top and played it, drawing eight additional cards during his end step. Nakamura didn't do much for the next few turns as Allen drew 18 more cards after Duressing and casting Illusions of Grandeur. But to get the Illusions, he had to cast a Demonic Consultation that went wrong and removed all three of his remaining Forces of Will from the game and revealed maindeck Pyroblasts. After Necroing, Allen had no more cards left in his library!

Nakamura mulled over what he could potentially draw before getting the gift of Illusions. He knew Allen had no Force of Will remaining, but he did have a single Duress in hand (since three were in the graveyard) that would remove any counterspell before casting Donate. It didn't appear that there was anything he could draw to save him but appearances were deceiving as he drew...Horn of Greed!

Nakamura had a big smile as he cast the Horn of Greed with Allen tapped out and began playing the many land in his hand and drawing cards. But he kept drawing land instead of counterspells and ended the turn with more land, a second Horn of Greed and an Oath of Druids in hand. With nothing to stop him, Allen played a Mox, cast Duress and Donated the Illusions.

Nakamura had his back against the wall as he paid the upkeep on Illusions and played land after land to draw more cards. He played four lands and drew three lands and a Gaea's Blessing that he immediately cast to put three Gush back into his library. From the Blessing he drew Morphling!

Nakamura faced a choice of casting Morphling or keeping five mana open to hard cast Force of Will in case Allen had a Pyroblast or Hoodwink. He thought it over for a while and decided to keep the mana open for the Force. It turned out to be a very good decision as Allen attempted to Hoodwink the Illusions and Nakamura Force of Willed it. Allen then cast a second Illusions!

Nakamura still couldn't find an answer as he paid the upkeep on his Illusions and things only got worse the next turn as Allen Donated a second Illusions to him. With a cumulative upkeep payment of 12 mana, Nakamura didn't draw a land or a Gush and was forced to concede.

Nakamura didn't mulligan in game two but Allen did. It didn't seem to hurt his game, however, as he played a first turn Mox Diamond and a Brainstorm. Nakamura opened with Arcane Denial, Hunted Wumpus, Gush and four lands but didn't cast anything for the first three turns. Allen played Necropotence and Pyroblasted Nakamura's attempt to Arcane Denial it. Nakamura did not look worried that his opponent just drew nine extra cards as he laid a fourth land, Gushed, and cast Hunted Wumpus! A relatively puny and ineffectual looking 5/5 Phyrexian Negator joined the Wumpus on the board.

Allen began playing all his new spells - a Brainstorm, Duress (for Gush), Mox Diamond and Demonic Consultation for a Phyrexian Negator that he then cast. Nakamura pulled a Spike Feeder off the top and cast it but it was Force of Willed. Allen still didn't draw what he needed and was forced to do nothing but Necro for four more cards on his turn and then Consult for a *third* Negator! It's extremely risky to Consult a second time - especially for the same card! But Allen's deck was kind to him and he drew the Negator, played it, and attacked with the other two.

In a terrible miscalculation, Allen didn't realize that he would have to sacrifice a Negator in addition to six extra permanents if the 6/6 Hunted Wumpus blocked it. After being told this by the head judge, Allen no longer had the land he needed and conceded a game that was already looking very poor for him.

Nakamura opened with Morphling, Exploration, two Spike Feeders and three Islands. Unable to cast three of his spells, Nakamura chose to mulligan but drew six cards with only one Island and an Impulse! Nakamura mulliganed a second time and was stuck with five cards and no land. He chose to keep it instead of dropping to the nearly unwinnable four card opening hand.

Allen opened with a Mox Diamond and Brainstorm. Nakamura needed to draw a land and he did! Allen answered with another Brainstorm and a Duress taking Arcane Denial. If Nakamura drew a second land then he could potentially be in the game, but it was not to be as he was unable to do anything and had to pass the turn to Allen. But in a rare situation for a NecroDonate deck - Allen didn't have anything to cast on turn three! Nakamura then drew a second land and cast Scroll Rack expecting it to be countered, but Allen just didn't seem to have anything in his hand.

With Scroll Rack, Nakamura suddenly had a wide range of options as he could go several cards deeper into his deck for land. Allen cast a third Brainstorm and Duressed a Horn of Greed out of Nakamura's hand before playing a Phyrexian Negator. But Nakamura Racked into a Spike Feeder that bought him some time followed by a Hunted Wumpus! The might green beast functioned as a Circle of Protection: Negator as it slowed down all of Allen's offence. Using the extra time, Nakamura began playing Explorations and Horn of Greeds as Allen played a Necropotence. With three Explorations and two Horns of Greed in play, Nakamura was playing four land and drawing eight cards a turn. Ironically with only Necropotence and no Explorations, Allen was unable to match the card drawing! Allen should have brought the parts of the combination back into the deck after seeing the Hunted Wumpus that stopped the Negators and by not doing so he paid the price and lost the match to the big 6/6 fattie.