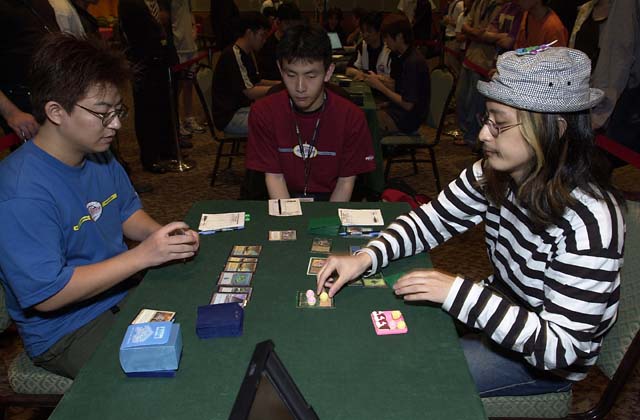 Obviously having practiced the match, Nakamura chose to begin without casting his Llanowar Elves, as he didn't want to allow a 2 for 1 card advantage with Wrath of God. His first play, a turn three Silt Crawler, was Absorbed by Okamoto, who then allowed Opposition to hit play as he had an unkicked Dismantling Blow.

By playing an early Story Circle, Okamoto quickly put Nakamura in a precarious position as it forced him to play multiple creatures in order to get through for some damage. But with Okamoto drawing lots of land, it was a doomed effort.

Using a second Blow, Okamoto continued to keep Opposition off the board, as Nakamura would have been able to use it to tap white sources and perhaps get through the Circle with a creature. Instead, Nakamura was forced to watch his Blastoderm slowly fade away as his Elf and Crawler futilely attempted to beat down.

Realizing he was in trouble, Nakamura attempted a variety of ploys. First he tried to play two Saproling Bursts in order to overwhelm the Circle, but Okamoto countered the second one and was in no danger. Then Nakamura attempted to play a Chimeric Idol, the only source of non-green damage in his deck, but again Okamoto just countered it.

With so few threats remaining in his deck, and with Okamoto at 25 life and drawing lots of extra cards with Fact or Fiction and Accumulated Knowledge, Nakamura conceded.

Okamoto mulliganed to begin Game 2 but was still able to Counterspell Nakamura's first play - a turn three Silt Crawler. He let Opposition resolve, however, hinting at enchantment removal in his hand. He then let Spontaneous Generation resolve the next turn, suggesting that maybe he didn't just have any counters at all!

With four cheesecake tokens representing 1/1 Saprolings, Nakamura was in very good shape as he could tap all of Okamoto's permanents with the Opposition. But Okamoto had the Dismantling Blow followed by Mageta, the Lion to take care of the situation and suddenly Nakamura was no longer in control of the game.

Looking for more threats, Nakamura played Fact or Fiction followed by Saproling Burst. Despite access to his opponent's deck list before the match, Nakamura chose not to put in any way of handling Mageta such as a Waterfront Bouncer. His only method of winning at this point was to play so many threats that Okamoto ran out of cards activating the legendary Spellshaper.

In attempt to further that goal, Nakamura played a Disrupting Scepter and activated it, but Okamoto was even able to take advantage of that by playing a kicked Dismantling Blow, and in a telling move, discarded Wrath of God after drawing two cards. When the blue-white player starts discarding Wrath of God, you know your creature deck is in trouble!

As he continued to discard mass creature removal spells, eventually Okamoto got up to enough land that he felt safe playing two Mahamoti Djinns and quickly took game two.

While Nakamura was satisfied with his sideboarding choices from the first game, Okamoto took all the Mahamoti Djinns back out and put in the Millstones again. Presumably he was realizing the lack of synergy with the Mageta that so dominated the game for him. 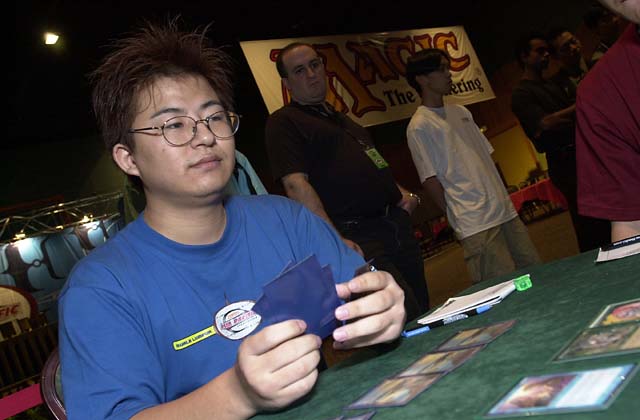 Using an Elf, Nakamura began with two consecutive Bursts but both were countered. Okamoto had some threats of his own in two Millstones, though I'm sure he was much more concerned with surviving than milling his opponent at this point in the game.

As both players drew additional cards with Gush, Knowledge and Fact or Fiction, again the game began slipping away from Nakamura as Okamoto sat back on counterspells and enchantment and artifact removal before playing the game-breaking Mageta.

Unlike the second game, however, Nakamura was actually able to put Okamoto under quite a bit of pressure. With Opposition in play and drawing a variety of creatures, Nakamura forced Okamoto to continually take damage between using Mageta every two to three turns. This forced Okamoto to play in top-deck mode, which is not optimal for blue-white. Nakamura continued to use a creature to tap Mageta during Okamoto's main phase and so his Chimeric Idol could not be killed unless Okamoto drew artifact removal. Unable to draw what he needed, Okamoto conceded.

Neither player chose to change their game plan for the fourth game, moving no cards in or out of their sideboard.

In a fine play, Okamoto lackadaisically played a second turn Millstone knowing that Nakamura had no turn two plays in his deck. Having access to your opponent's deck list the night before can allow you to make plays that you normally wouldn't, and it takes a keen player to notice these subtleties.

Okamoto followed up the Millstone with a Story Circle, as he seemed unable, or unwilling, to counter Nakamura's Opposition, Silt Crawler or Spontaneous Generation. But all was made clear when he used Dismantling Blow on the Opposition and used good ol' Wrath of God to clear away all the creatures.

As with the first game, Nakamura was again facing a difficult situation with Story Circle as he has no enchantment removal in his deck or sideboard. Bringing out Chimeric Idol helped, as did a Saproling Burst after Okamoto Counterspelled the first one.

With four Saproling tokens and an Elf, Nakamura was forcing Okamoto to tap most of his lands each turn for the Story Circle. But the real problem was the two Chimeric Idols! While most players may have rushed in with both Idols when their opponent was at five, Nakamura correctly guessed the Okamoto may have a Rout in hand that he could cast as an instant. Okamoto did indeed have the Rout and Nakamura was left with one Idol that attacked for three the next turn.

Again unable to draw an answer for the 3/3 artifact, Okamoto conceded to the Idol beatings the next turn.

Realizing that he was losing with Millstones in the deck, Okamoto took them back out for the Djinns. Having proved that he could defeat Mageta and Story Circle with his current configuration, Nakamura made no changes before this final game. 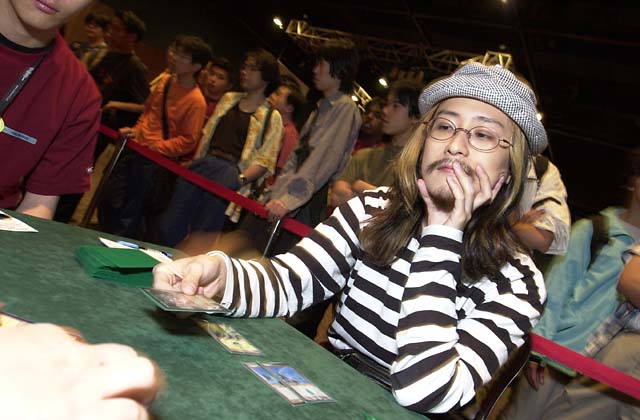 Okamoto did not start well as he was forced to mulligan, however he still had the Counterspell he needed for Chimeric Idol and the Wrath of God required to handle Spontaneous Generation Tokens and a Silt Crawler. Following up on his early game, Okamoto played Fact or Fiction revealing much dreaded Story Circle, three land and Opt. Aware of how his deck gets wrecked by Story Circle, Nakamura put it in a pile by itself. Okamoto took the lands and used Rout to clear away all the new creatures Nakamura had put into play. As he was tapped out, he was unable to stop Nakamura from playing a Disrupting Scepter. The Scepter started doing serious damage to Okamoto's hand and things began to look a bit grim for the blue-white deck.

But his realization involving his sideboard saved the day as he played a sixth land and Mahamoti Djinn. Unable to cast both Opposition and Silt Crawler with his opponent tapped out, Nakamura settled for the Crawler and using the Scepter again.

In a marked departure from the normal method of victory for blue-white decks, Okamoto followed up the Djinn with Mageta in an attempt to win with plain old attacking. Nakamura was able to hold off the big Djinn with Opposition, but only for a turn as Okamoto used Disenchant to free up his creatures to deal lots of damage each turn.

The Lion exchanged with the Crawler, and Okamoto's blue-white creature deck was totally in control. After he countered Nakamura's Birds of Paradise chump blocker, Nakamura conceded.

Jin Okamoto defeats Satoshi Nakamura to proceed to the semi-finals!

Afterwards, Nakamura defended his decision not to bring in the Bouncers as in practice the night before they had found that the only way for him to win was early beatdown and the Bouncer's were too small for that. If he didn't win the first six or seven turns, he was probably in trouble as he had misconstructed his deck by not including any method of handling Story Circle.