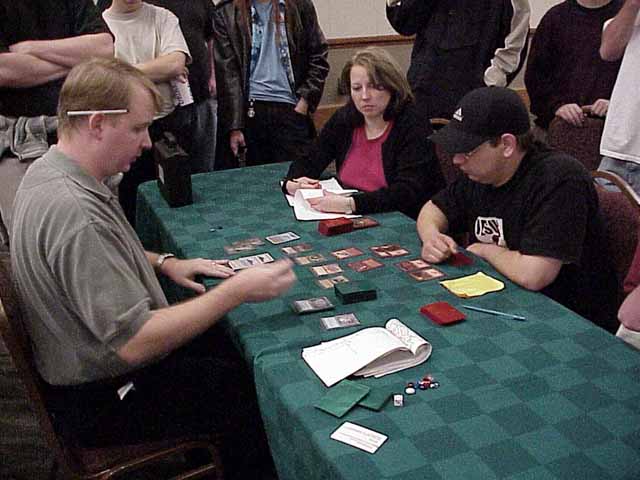 Scott won the die roll and elected to play first. He laid a forest then cast a Quirion Ranger. Robert had an amazing opening hand, consisting of 2 Jackal Pups, a Fireslinger, a Cursed Scroll and some land. Robert led with a mountain and a Jackal Pup. Scott laid another forest and cast a turn two Survival of the Fittest. On his turn, Robert laid a land, cast Fire Slinger then attacked with the Pup. Scott laid an Island then cast a Brainstorm. Robert used the Fireslinger's ability to kill the Quirion Ranger, and attacked with the Pup. He laid another Mountain, and cast another Pup and a Goblin Patrol. At the end of Robert's turn, Scott discarded Tradewind Rider to get Squee, then survivaled away Squee to get another Tradewind. In his main phase, Scott cast the Tradewind.

Robert paid echo and cast a Hammer on the Tradewind. Scott used a Force of Will, discarding a Counterspell, to prevent the Tradewind from taking three damage and being vulnerable to the Fireslinger. On his turn Scott survivaled for and cast a Wall of Roots. At the end of Scott's turn, Robert used the Fireslinger on Scott. After untapping, Robert cast an Incinerate on the Tradewind that Scott was unable to prevent. Robert then used the Fireslinger to finish off the Tradewind, and sent in the team, consisting of 2 Pups and a Patrol. For the rest of this first game, Scott frantically tried to maneuver into a winning position, but even the Tradewind Rider, squirrel tokens (from a Deranged Hermit) and Quirion Ranger were unable to protect Scott from the burn in Robert's deck.

During sideboarding, Scott made a few nervous comments about how he'd be able to handle the burn after sideboarding. He also made a few discouraged comments about how he had squandered his chance to go first. After reviewing his draw, Scott made a frustrated face and elected to take a mulligan. He revealed it to be a couple of Counterspells, a Tradewind Rider and some land. His new hand consisted of ZERO Lands, a Force of Will, Counterspell, Tradewind Rider and two Land Grants. He elected to keep it, and immediately showed Robert his land to get a Tropical Island. He laid the Tropical Island, cast a Bird of Paradise, and for some reason did not elect to cast his other Land Grant. Robert had a good hand, and started with a mountain and a Jackal Pup. After a long pause, Scott elected not to use his Force of Will to prevent the Pup from resolving.

On his second turn, Scott drew a Tropical Island then played it. He then revealed his hand to Robert to cast the second Land Grant. He got a forest. On his turn, Robert used a Wasteland to destroy the Tropical Island, Shocked the Bird of Paradise and attacked with the Pup. Scott cast another Tropical Island on his turn, and used it to cast a Quirion Ranger. Robert cast another mountain, incinerated the Ranger and attacked with the Pup. At this point it was looking like Scott was about to be in serious trouble. On Scott's turn he cast another Land Grant, and played a Tropical Island. Robert laid a mountain, attacked with the Pup, and attempted to cast another Pup, which Scott countered. On Scott's next turn he cast Survival and started cheering. After casting the Survival, Scott slowly took control of the game. On successive turns he was able to start using the Survival/Squee engine to fetch a Bottle Gnomes, a Spike Feeder and then a Tradewind Rider. The game was basically over when Scott started to activate the Tradewind to bounce the Spike Feeder after removing a token to gain two life. Robert used a well-timed Fireblast to kill the Tradewind Rider, but on the next turn Scott got a Masticore and was able to keep all of Robert's threats off of the board. With a few more attack phases, Robert was dead.

There were only 23 minutes (out of 90) to complete the third game. In the absence of a victory by either player, the game would be decided on life totals. This tiebreaker seemed to give a definite advantage to Robert, but Scott vowed to play faster. Again Scott was forced to take a mulligan, but his resulting hand was excellent, consulting of a Morphling, Counterspell, Survival, Force of Will, Land Grant and a Tropical Island.

Robert's opening hand was sub optimal, and he laid a Mountain and cast a Goblin Patrol. Scott led with a Tropical Island, then revealed his hand to cast Land Grant for a Forest. Robert paid the echo on his Patrol, attacked, cast a Wasteland and used it to kill Scott's Tropical Island. On Scott's turn he simply laid a forest. Robert laid another mountain then attacked with his Patrol. On his third turn, Scott got a Survival into play, and cast Land Grant to get a forest, revealing a Counterspell, Morphling, Brainstorm, and Force of Will. On his turn, Robert attacked with his lonely Patrol. Once Scott got the Survival on the board, it was going to be very difficult for Robert to win. Over the next few turns, Robert managed to get Scott down to 3 life, but was unable to kill him for the win. Robert was holding a Fireblast, but Scott wisely used his Survival/Squee engine to get a Bottle Gnomes, and then a Spike Feeder. When the game went into final turns, Scott's life was at five, and Robert's life was at 18. Despite the match lasting 90 minutes, the final turns lasted an additional 20 minutes, as Scott and Robert agonized over every spell. With some very complicated Tradewind/Bottle Gnome/Quirion Ranger + attacking with everything maneuvering, Scott managed to get his life up to 14, and Robert's down to 3. Scott won the game on life totals, and therefore the match.