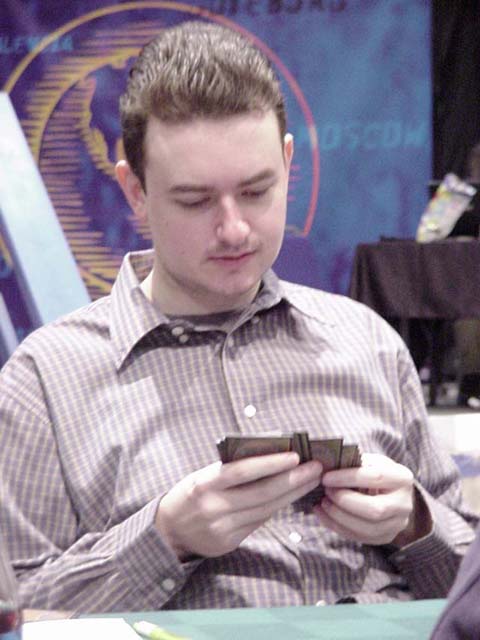 Neither player had a clue what the other had drafted, but both had some preconceptions about their opponent's color preferences. Scott thought Eivind was a Green/White drafter, while Eivind thought that Scott was maybe Green/Blue/White, especially given all of the amazing Green/White cards at the table. Eivind was closer to the mark as they sat down to play, Scott with his U/W/b Dromar.dec, and Eivind with his Ultra Aggro B/R deck. Having seen both decks before the match, I knew that if it went to a late game, Scott would be victorious, but he'd likely be on the back foot and heavily defensive early on.

Scott won the dice roll and elected to play. Both players kept their hands, Eivind's with two swamps, Scott's with blue and white mana available. Scott opened with a trapper on turn two, Tower Drake on turn three and an Ardent Soldier turn four, nice curve. Unfortunately Eivind had missed his third turn land drop and could only mount a Nightscape apprentice as defense. He did manage to draw a third swamp, which he played on turn four, but on Scott's turn five he beat Eivind down to eleven and made a Benalish Lancer without kicker. Eivind drew a fourth Swamp on his turn five, but he only managed to cast a Volcano Imp since his hand was full of Red cards.

Scott Hobbled the Volcano Imp and attacked with all of his Guys, leaving Eivind on four. Eivind still couldn't draw a Mountain, but with a Death Bomb in hand, could give himself another draw step if Scott played slightly incorrectly. Scott saw the plan, tapped the Apprentice, and swung for the kill. 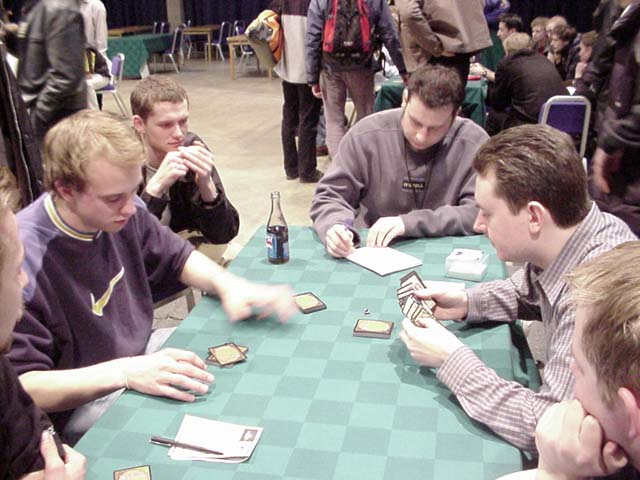 Eivind sideboarded in an additional land (up to seventeen) since he was planning to go first, and Scott went slightly heavier into black, with Cavern Harpy and Ravenous Rats joining his team. Both players kept their hands, and Eivind opened well with a Swamp, Mountain and Shivan Zombie on the board at the end of turn two. Scott just played a land, and passed the turn. Eivind missed the third turn land drop for the second game running but did manage to Maniacal Rage the Zombie and attacked Scott to sixteen. Scott played his third land and passed again, and cast Deliver on the Zombie when it attacked. Eivind missed another Land drop and replaced the Zombie with a Rogue Kavu. In Scott's turn he cast Worldly Council for two, looking for a plains, which he found and played, and when Eivind missed his fifth turn land drop, he walked the Zombie right into Scott's Prohibit.

Scott then played Samite Archer and passed, while Eivind finally drew a third land and after attacking Scott down to ten life, cast a Vicious Kavu. Scott untapped, cast Dromar the Banisher and passed, looking fairly confident. The Rogue Kavu was shot on Eivind's next attack, and Dromar was stunned into not blocking. Eivind drew a Lightning dart off the Stun and wished the Dragon could block. Eivind also managed to play a fourth land, and passed the turn. Scott attacked with Dromar, Banishing all red creatures to their owner's hands, and played Sunscape Familiar to block any haste creatures that might hit play. 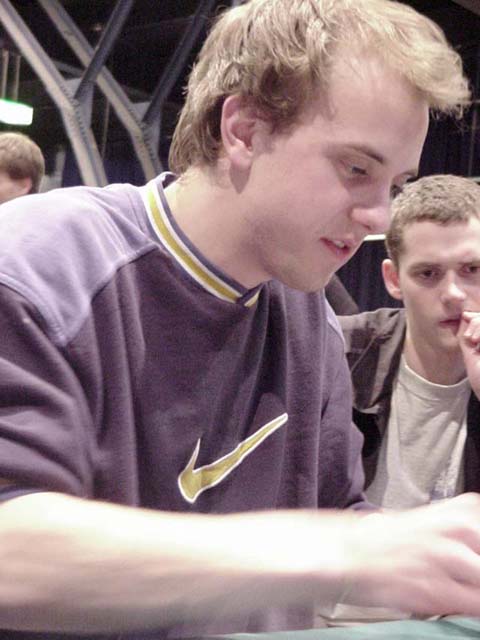 Eivind Lightning Darted the Samite Archer in end of turn step, Scott shooting Eivind in Response, since he wanted to save his Pollen Remedy for a burn spell aimed at his head. Eivind then remade the Vicious Kavu, and passed the turn. Dromar beat Eivind down to seven life, and then Scott summoned a Glimmering Angel for a kill next turn. Eivind finally managed to topdeck though and played Do or Die, leaving Scott with only the Dragon and attacking him down to two with Vicious Kavu, and a Soul Burn in hand, and the kill next turn... if he played right.

He had an Urborg Phantom and a Viashino Grappler in hand, but instead of forcing the Banish Black effect he chose to let Scott Banish red, and Pollen Remedy the Soul Burn for the win one turn later.