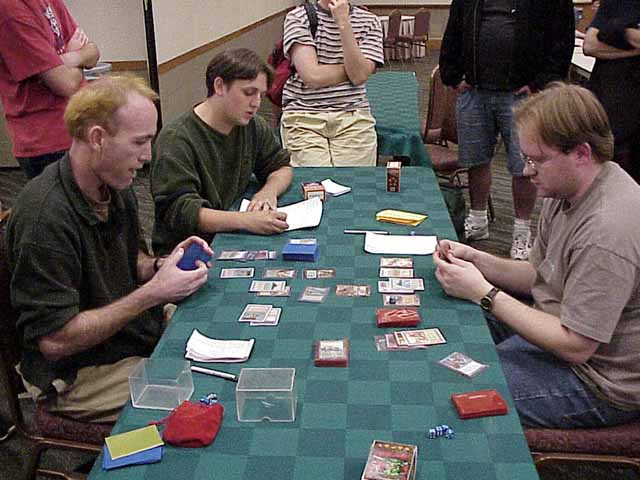 The game started with Joel playing a Hibernation Sliver and at the end of Joel's turn Sean cast Enlightened tutor for Oath of Druids. The next turn Sean made what turned out to be a costly mistake. Instead of playing the Tropical Island to get the green he need to cast the Oath, Sean played Tundra, tapped it and another land and put Oath of Druids in play. Not having a green for the Oath he had to return it to his hand and take two mana burn. The next turn Joel played an Acidic Sliver and attacked with his Hibernation Sliver. On Sean's next turn he played the Tropical Island he meant to play the turn before and was able to cast his Oath. Unfortunately for Sean Joel now had a Seal of Cleansing to destroy it. At the end of the next turn Sean again used Enlightened Tutor to put Oath of Druids on top of his library. Sean was able to force Oath in to play with force of Will removing Morphling from the game. Joel then attacked back with his slivers bringing Sean to 8. During Sean's next turn he oathed up a Spike Weaver. This would keep Joel's creatures from dealing any combat damage for the next few turns. On Sean's next turn he oathed up a Spike Feeder. This turned out not to be enough though because Joel had a Swords to Plowshares to remove the Weaver and deal enough damage by attacking with his slivers and firing them at Sean (Acidic).

This game started out very well for Joel with a first turn Duress. Sean's hand revealed only land and a single Oath of Druids. Joel played a Crystalline Sliver on his third turn which Sean countered with Pyroblast. Joel cast another on the next turn which got through. Both players traded damage for the next few turns. Joel with his slivers (Acidic and Crystalline) , Sean with his Treetop Village. Joel then changed plans and kept his Crystalline Sliver back and traded it with Treetop Village. Sean then tutored for Oath of Druids but Joel had the Erase to remove it. Sean looking in deep trouble used Brainstorm combined with the shuffle effect of Flood Plain for a "Ancestral" type effect. This got him to his Morphling, which Joel had a Cursed Totem to deal with. This didn't turn out to matter though as Morphling even without his abilities eventually dealt the final blow after being chump blocked by a Sliver.

This game started out well for Sean with a second turn Oath of Druids. However Joel was able to use seal of Cleansing to destroy it. Sean then played a Powder Keg, which is very affective against slivers since it can be sacrificed once it gets two counters on it to destroy all creatures or artifacts that cost two (all the creatures in Joel's deck).

Sean used a treetop Village to hold off Joel's Slivers while he attacked with a Faire Conclave. Joel finally killed the man-land with a Pyroblast. After Joel played a second Sliver Sean used his powder keg to try and kill the slivers but one was a hibernation sliver and Joel paid 4 life to return them to his hand. The next turn Joel replayed his slivers but Sean had a Pyroblast for one of the Hibernation slivers. Sean next few draws were very good. He drew two counterspells consecutively then a treetop village. Sean then went for the game. He played the oath of druids he had drawn earlier which resolved. Then attacked with both treetop villages and Joel packed up his cards. Sean will go on to play Thomas Keller in the Semifinals. Keller is also playing Counter Sliver.