The first game was a very one-sided affair: Michael Mercer's Fires deck did what Fires players dream about: early creatures, quickly followed by a Fires of Yavimaya, a Saproling Burst, and enough removal in the form of Flametongue Kavu and burn spells to remove the few threats that Shun was able to put up.

This heavy-hitting control power was backed up by a Dust Bowl, but it was of little use as Shun dropped only three lands in the whole match, and the few creatures he had that he could cast were only speed humps to the onslaught. A River Boa looked to be trouble, but was quickly the target of a Ghitu Fires; the tapping effect of the Regeneration shield removing it as a blocker, and Mercer's creatures came in for the final 12. 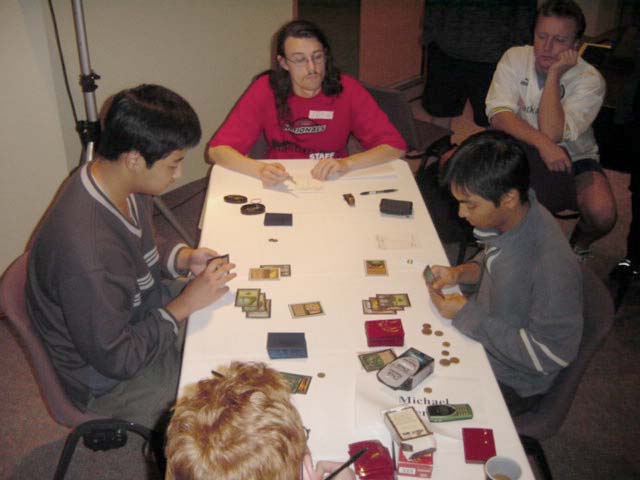 Jiang's first-turn Forest was beaten by Mercer's Karplusan Forest and Llanowar Elves, but Shun recovered with a Port which shut down the Karplusan Forest for most of the game. Shun dropped a City of Brass, taking some damage to cast a Blastoderm. This was matched by Mercer, who also dropped a Blastoderm. Shun's attacking 'Derm was blocked by Mercer's, and they traded fatties. Shun drops an elf, which Mercer promptly killed with a Flametongue Kavu. Holding two Wax/Wanes was not particularly helpful to Jiang, who rapped his deck in an attempt to improve his draw: the Bird he drew was little consolation when Mercer dropped a Blastoderm.

On his next turn, Michael attacked with the 'Derm, then bounced it to a Shivan Wurm. Jiang top-decked a Blastoderm, which was by now outsized by the Wurm. Mick Mercer held off his attack, and cast a Saproling Burst, which was Waned in his end phase. Jiang's hopes of finding an answer to Mercer's superior draws were fading along with his Blastoderm, and Mercer kept the pressure up by casting another Saproling Burst which was, again, Waned. Jiang drew an Ancient Hydra, which eventually blocked one of Mercer's 'Derms (he had since dropped another, his third for the game), making a valiant effort and damaging Michael after lethal damage was on the stack.

On the final turn of the match, Jiang was on 9 life with some mana-producing impediments between himself and Mercer's Wurm, 'Derm and Flametongue. Michael taps out to cast a six-point Ghitu Fire on Jiang, and then sends in the beats. Jiang looks at his hand (a mountain and his third Wax/Wane), and offers his hand in defeat.