Sixth seed Norwegian, Sondre Ellingvåg was matched against third seeded Raphaël Lévy in the Quarterfinals of Grand Prix Gothenburg. Raphaël Lévy from France, is a long time veteran of the Pro Tour scene, having made Top 8 in previous Grand Prix, Pro Tours, and even World Championship events. Although he had commented that it had been a very long time in a Grand Prix and he was happy to have finally made Top 8 again. Sondre is new to the scene with this being his first premier event top 8. He was also at the top of the standings for players with a rating flag of 1700 or less. This means that a win here and he would be taking home the most money in the tournament, more than the winner if he were to win here and lose in the semi-finals. It was a little obvious that Sondre was slightly nervous but he was happy to have made it this far and to have qualified for his very first Pro Tour.

Sondre won the die roll and choose to play first. Both players decided to keep their hands as they both had a fair mix of lands and spells. Sondre only had an island on his first turn while Raphaël summoned a Thornscape Apprentice, the "green tapper". Sondre's second turn was the exact same as his first, "Island, Go". While Raphaël played an Irrigation Ditch and attacked for one.

Sondre then played a Mountain and cast Zap on the Thornscape Apprentice not fearing a Giant Growth spell, which Raphaël did not have. Raphaël then played another land and a Nomadic Elf. Sondre played a Swamp and a Firescreamer and when Raphaël attacked he decided not to block. Surprisingly, Raphaël had no play and just laid a plains and was done.

Sondre attacked for two with the Firescreamer and cast a Duskwalker. Raphaël drew more land, but was holding a Sabertooth Nishoba and decided that sacrificing his Irrigation Ditch to play it now was better than playing nothing again. Sondre thought a bit on his turn and while shivering asked the judge a rather peculiar question. He wanted to know if he could play a Phyrexian Delver with no creature in his graveyard to return. After finding out he could, he still decided to cast a Shivan Zombie instead. Raphaël went to 15 after taking a hit from the Duskwalker. He summoned a Stone Kavu on his turn and attacked with the big Nishoba to bring Sondre to 12. 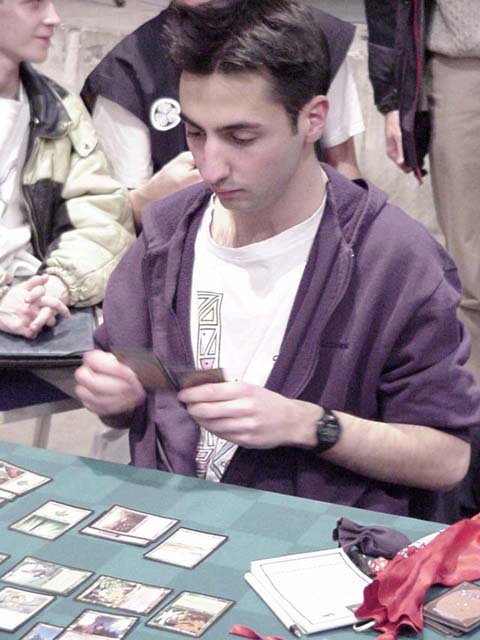 Sondre drew an irrelevant Urborg Shambler and cast the unfair Magma Burst with the kicker targeting the Nomadic Elf and the Stone Kavu. He sac'd two of his three swamps, leaving him one swamp, two islands and one mountain, but both the cards remaining in his hand required two black to be cast. He then attacked with both his creatures and pumped the Firescreamer once to bring Raphaël to seven.

Raphaël drew and it was a miracle card, Island. He cast a main phase Fact or Fiction and after revealing the five cards it showed why this card is incredibly broken. It was Gerrard's Command, Island, Plains and two Armadillo Cloaks. Raphaël had to play an Island to cast the Fact or Fiction so he wouldn't be able to play the Cloak this turn, but he could play the Command if necessary. Sondre knew that there would be no way to deal with the Nishoba if it had two Cloaks on it the next turn so he had to split those. He then put a Command with one and the two lands with the other. Raphaël chose the one with the Command so he could attack with his Nishoba and be able to win the next turn if Sondre did not have anything. He attacked bringing Sondre to seven. Sondre attacked with the Shivan Zombie and his Duskwalker but not the Firescreamer because he knew about the Command that would be untapping the Nishoba. After Raphaël took five damage, bringing him to two, Sondre then scooped his cards bringing a sigh of relief to the scared Lévy.

Sondre sideboarded out his Goblin Spy for an Opt although he was only splashing blue in his Black/Red deck for Repulse, Confound and Hunting Drake. Raphaël's deck was considered by most, Amazing. It contained TWO of the rare Sabertooth Nishobas, which he got third and fifth picks of the draft, two Armadillo Cloaks, and a Questing Phelddagrif. He did not have anything to sideboard and they began game two. Sondre choose to play first.

Sondre played Swamp while Raphaël played Irrigation Ditch again. On the second turn Sondre played the Nightscape Familiar while Raphaël played a Nomadic Elf. Sondre then played a Mountain and a Shivan Zombie and Raphaël just said go on his turn as he had no play and felt it was better to take only two instead of to trade two damage for three. Sondre then played Scorching Lava on the Nomadic Elf, but Raphaël had a Fleetwood Panther to summon and counter the Lava. Sondre attacked with his pro white Shivan Zombie to bring Raphaël to 18 and was done.

Raphaël the attacked but Sondre just blocked with his Familiar and regenerated it. He played a land and the Nomadic Elf again. Sondre's turn was rather uneventful as he just played a Terminal Moraine and had nothing to cast. He did not want to trade his important Zombie for the Nomadic Elf so the turn proceeded to Raphaël. Once again Raphaël had the Nishoba and sac'd the Ditch to play it on the fifth turn. Sondre sac'd his Moraine but he already had established a good mana base so it was rather irrelevant.

Sondre sent his Familiar into the hoard of monsters on Raphaël's side, but since he was at 18 and felt it was better not to risk anything, he choose to take the point. Sondre then summoned an Urborg Shambler and it was obvious as to why he attacked with the Familiar. Raphaël attacked with his Nishoba as Sondre only had two Islands open and there aren't many tricks he can do against the pro blue creature with two blue mana. Sondre attempted to block with his Shivan Zombie and Urborg Shambler but learned that both gold cards were protection from half of each other and had to take five damage instead, bringing him to 15. Raphaël then played a plains and cast Questing Phelddagrif leaving a plains open to protect it. The game was over in a few turns as Sondre only drew lands and could not deal with the very large creatures with protection from the colors of his deck.