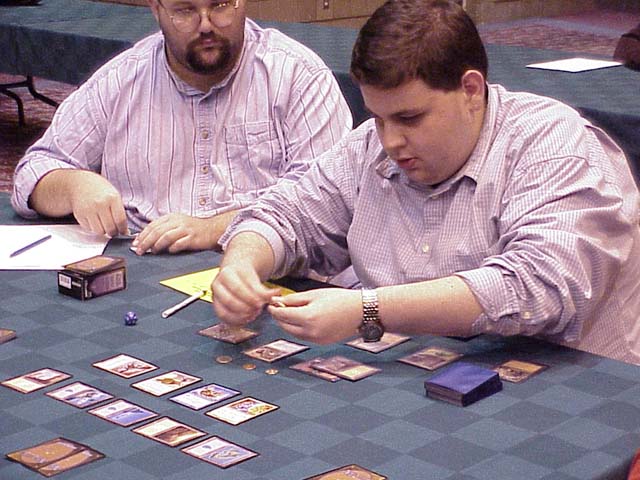 A Grand Prix Top 8 can reflect in its players a few things, consistency, luck, and skill. Two names that almost everyone will recognize showed just those three things in making the top eight in New Orleans. Casey McCarrel (10-1-2) with U/W and Steve O'Mahoney-Schwartz (10-2-1) fought for the right to pass on to the top four. Steve is packing Rith, The Awakener (one of five dragons in the top 8), an Armadillo Cloak and Canopy Surge as some of his best cards. Casey's draft was dictated primarily around the cards he was passed, white/blue the two best. The problem though was that almost none of the premium white/blue cards came. Instead Casey's deck was full of one and two drops allowing him to play fifteen lands.

Game one started with a horrible misplay on Casey's part. Both players played out Apprentices, Steve with Thornscape and Casey with Stormscape. Steve untapped and laid a mountain and said go. Casey untapped and attacked, assuming that Steve wouldn't want to trade and he'd get a free point through. Steve blocked and used the Apprentice's secondary ability to give itself first strike and killed off Casey's tapper. Casey then laid Crimson Acolyte, which can be very good against any removal Steve presents. Steve attempts a Fertile Ground but Casey Prohibits it. This play ended up being amazing as Steve had Rith in his hand but could not cast it. The game continued with Benalish Lancer (no kicker) played by Steve, and Shoreline Raider and Ardent Soldier with kicker on Casey's side. Finally Steve drew the last mana he needed, and busted out Rith.

Casey answered back with Razorfoot Griffin, which could block the dragon with the help of the Crimson Acolyte. Ruham Djinn joined Steve's Team, and with the help of his tapper (still around for the first turn) Rith broke through making five Saproling tokens naming white. Casey attempted another blocker with Faerie Squadron with kicker, but Steve simply waited a turn, tapped one flier during Casey's end of turn, and then the other main phase. Rith made seven tokens this time, and as Casey does not have Wash Out or Rout, he scooped up his cards. 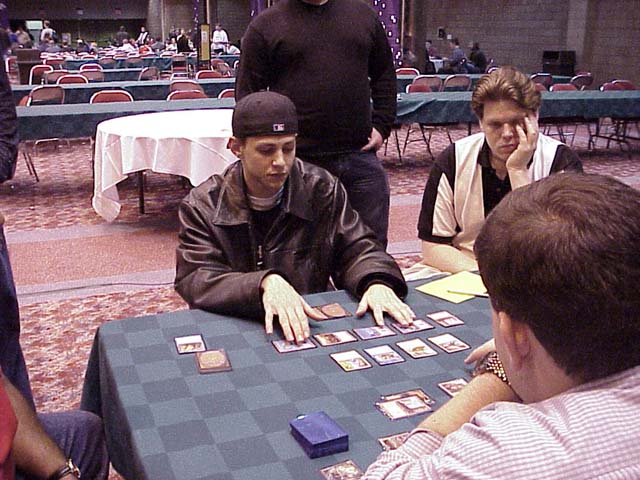 Game 2 was quick and bloody. Steve played Thornscape Apprentice and Pincher Spider by turn 3, while Casey had Benalish Trapper and Prison Barricade with kicker. Steve untapped, played Armadillo Cloak on his Pincher Spider and started attacking. Steve attempted a Serpentine Kavu but it was Excluded, but he maintained tapper superiority, tapping Casey's every turn and bringing over the Spider. Casey made a Shoreline Raider but it was still not enough. Steve dropped a Rainbow Crow and attacked again, Casey still not blocking. Casey dropped a Crimson Acolyte, and it looked like he might be able to get rid of the Spider. Steve dropped a Kavu Climber and waited. Casey pulled out all the stops, dropping Reya, Dawnbringer onto the table (not missing a single land drop) on turn eight (sacking a land). Steve calmly tapped Reya, and another creature main phase, and attacked again. Casey gang blocked, only leaving back his Crimson Acolyte and tapped Reya. Reya brought back a creature during Casey's upkeep, but as he was at one, there wasn't much he could do against the double tap that Steve would put on him for the win.