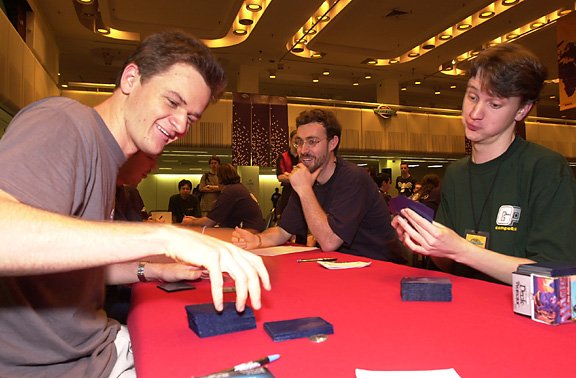 The first round of the quarterfinals saw Will Copeman playing Trade/Survival face off against Anatoli Lightfoot playing Trix. Having previously admitted that he wasn't confident going into the match up, Will was still adamant that he could pull off a miracle.

Game one proved to be an encounter of wits, mental concentration, top decking and bluffing skills. Winning the coin toss, Will elected to play first. Drawing his opening hand, Will almost drew a card, releasing just in the nick of time. Will proceeded to play an Island. Since the Grand Prix is Rules Enforcement Level 4, if Will would of draw the card out of turn Will would have received a game loss. On Anatoli's first turn, Anatoli played Duress seeing three counterspells, Forest, Land Grant, and Radiant's Dragoons. Anatoli discarded a Land Grant. Facing possible mana problems Will thankfully drew another Land Grant. Playing a Forest Will revealed his hand to cast Land Grant.

Anatoli's third turn saw him play a Necropotence, Will responded by attempting to Counterspell which was Misdirected onto Will's Counterspell, discarding Hoodwink for the Misdirection. Anatoli proceeded to pay 15 life to Necro. Confronting a possible Illusions of Grandeur/Donate combo next turn, with Force of Will backup, Will had to draw something outstanding.

Untapping his land, Will topdecked a Force of Will. Anatoli plays a Gemstone Mine and Mox Diamond before playing Illusions of Grandeur. Will counterspelled, Anatoli Force of Willed removing Brainstorm, Will responded with a Force of Will of his own (the one he topdecked) removing Counterspell. At 4 life, Anatoli drew another two cards from Necro, a land and an Illusions, leaving Anatoli with a land, Illusions and Donate. At this point, Will only had a Radiant's Dragoons in his hand, while Will drew a Mother of Runes. With no white mana, Will says done.

Anatoli's situation looked good, but in the following turns, Will's bluff paid off. Thinking that Will still had a Counterspell in his hand, from the Land Grant in the first turn, Anatoli played Donate, Donating his Necro to Will, not realizing that Will did not have a Counterspell. A quick check of the Will's graveyard would of shown this. The game looked interesting at this point with Will playing Trade/Survival having a Necro in play. Will proceeded to utilize his given Necro and draws 7 cards. Latter casting a Survival of the Fittest, Will plays a Quirion Ranger. With only 2 life left Anatoli stares at the humlation of a Quirion Ranger beatdown. Having no cards to deal with the Ranger, Anatoli futilely plays Duress, dying to the Ranger in the next two turns.

Sideboarding in four Pyroblast and a Misdirection, Anatoli's chances looked stronger. Will on the other hand sideboarded in four Annuals and a Monk Realist.

Game two commenced with Anatoli playing a first turn Duress, revealing a Brainstorm, Annul, Force of Will, Tradewind Rider, Spike Weaver, Island and a Survival of the Fittest. Discarding the Force of Will to Duress, Anatoli considered his avenue of attack in light of Will's hand. Will turn saw him play an Island and Land Grant for a Tropical Island.

Anatoli cast a Demonic Consultation on his second turn for a Duress, losing 12 land in the process. Playing the Duress, Will responds by casting Brainstorm, hiding two Annuls on the top of his deck. The Duress nets a Counterspell. The following turns saw only lands being played before Anatoli played a Demonic Consultation for a Necro. This time however, the dreaded Demonic Consultation proved hurtful to its user, removing key cards from Anatoli's deck. Playing the Necro, Will countered with Annul, Anatoli countered with a Pyroblast before Will responded with a second Annul on the Necro. The next turn saw Will play a Survival of the Fittest, Anatoli responded with a Vampiric Tutor for his last Necro. Playing the Necro uninterrupted, Anatoli paid 12 life. Will then Survivaled for a Squee, then Squeed for a Spike Feeder. Playing the Feeder, Anatoli responded with Force of Will removing Donate. Seeing Will's hand, Anatoli's only hope was to draw Firestorm in his last 7 cards, drawing 4 cards Anatoli conceded. Later revealing the last cards of his deck, Anatoli, as well as the crowd and Will were surprised to see that Anatoli forgot to sideboard in his Firestorm.

In the end, the bad matchup for Will proved to be a victory. Bad mistakes and sideboarding from Anatoli as well as bad Demonic Consultations were Anatoli's downfall. Will's topdecking skills saw him through to the Semifinals.