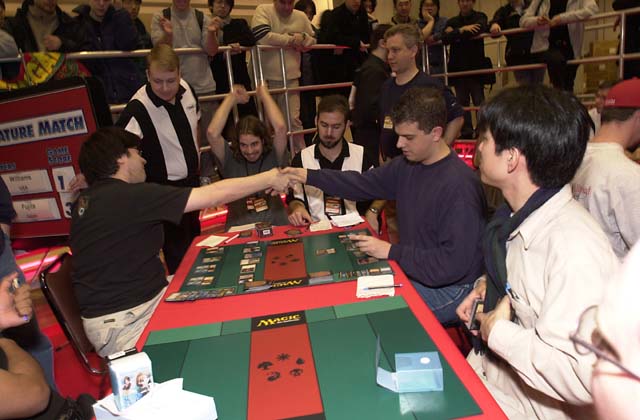 Going into this match, Frederico was probably feeling relatively confident, having a 2-0 record against the deck so far against Zvi and this writer in the Swiss. His u/b/r deck had done superbly to get to the Top 8, despite many top Pro Tour Players' opinions of Terminal Moraine in the deck, which can cause serious problems in the early game against a beatdown draw.

Zvi was playing an u/w deck built by one of the top English constructors John Ormerod, which was heavily metagamed against the red field with 4 main deck Galina's Knights and Crimson Acolytes.

When team 'Godzilla' learned of the final opponent, huge discussions began through the night on how to sideboard against the deck and the player, with playtesting going on into the night. With a tiny bit of persuasion, Zvi came round to the idea of taking out some Fact or Fictions after sideboarding in favor of as many aggressive beatdown creatures that could be fit in. Those 1/1 Stormscape Apprentice beat-sticks were going to go all the way! Doubtless, Frederic had given boarding some serious thought too and realized that the Terminates in his deck were nigh on useless against all the protection creatures Mowshowitz controlled.

Zvi won the toss and elected to play first, but had to mulligan. Having done this, he was relieved to find his opponent doing the same, so they both started with 6 cards in hand. His first play was a turn 2 Meddling Mage naming 'Recoil.' Godzilla had discovered earlier that even though Void was devastating, more often than not early damage was essential, so preventing the most common turn 3 removal was the best choice. A turn 4 Voice of All naming black (there were only 3 Urza's Rage that could take out a pro black creature) then joined the Mage, but Bastos answered with a Lobotomy. Tapped out Zvi had to reveal his 2 Excludes and an Absorb, and the Absorbs were duly removed from the game - the Excludes being very weak cards in this match-up.

Despite loosing his only counterspells, the American then tore a Galina's Knight off the top of his deck to apply even more pressure with his opponent now on 12 life. In desperation now Frederic could only Probe without kicker to search for answers in his deck and gave Zvi another turn to spank him down to 6. A sixth turn Terminate on the Meddling Mage that had named Recoil, then a Recoil on the Galina's Knight was not enough to save him as Zvi just attacked for another 3 and relayed the Knight. Bastos drew a card and then conceded.

Zvi:
Takes out: 3 Fact or Fiction, 3 Exclude, 4 Repulse
Sides in: 3 Crusading Knight, 4 Disrupt, 3 Gainsay
It had earlier been determined that the Pure Reflections would only be possibly good going first.

Frederico:
Takes out: 2 Terminate, 2 Probe
Sides in: 1 Tsabo's Decree, 3 Gainsay
The Decree, despite being a 6 mana spell, is reasonably good in this match up as the u/w deck has 7 Knights after boarding. 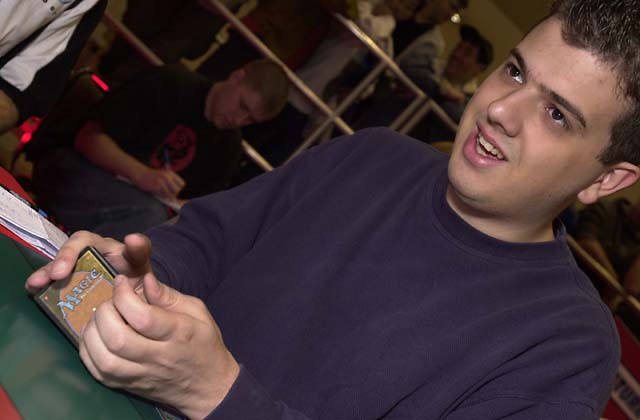 Zvi's luck continued as once again Frederico had to mulligan down to six, but his lack of early aggression makes the game look reasonably grim to begin with. The first play of the game was Zvi's turn 4 - a Crimson Acolyte which resolved, then an instant Fact or Fiction was Gainsaid, but this left him tapped out. Bastos took advantage of this by casting Void for 4 that killed off a Voice of All and a Crusading Knight, but revealed 3 Absorbs in his opponent's hand. However, Mowshowitz was lacking a second blue source to cast any of them, and just made a Meddling Mage naming 'Spite/Malice.'

Things then began to get interesting as the Portuguese player cats a main phase Fact or Fiction which was split:

He took the Probe and the Fact or Fiction, probably wanting the Probe to remove two of the Absorbs whilst the American only had one Island in play, and favoring the card drawers whilst on such a high life total (19) with only 3 power on the table. Unfortunately for him, Zvi then ripped a Crusading Knight, which was a 3/3 due to the swamp on the table.

Sure enough, Bastos then had to cast Probe with kicker to remove two of the Absorbs, with Frederico discarding a Gainsay and an island. Zvi then took him down to 10 with his three creatures, but in the next turn the Knight was Decreed away (Zvi cycled a Disrupt). Drawing a second island finally, Zvi then attacked for just 3, but now had a castable counterspell to defend his critters.

In the hope that Zvi would not counterspell a Recoil, Frederico then main phase had a go at the Meddling Mage, but it was Absorbed. A second Recoil was then used on the Mage, so a Plains was discarded, but he just hit the table again the next turn naming 'Spite/Malice' and Bastos was down to six, in desperate need of a way of dealing with the Crimson Acolyte and with a useless Spite/Malice in hand. With two turns left to live, he cast Fact or Fiction again, desperately looking for a Void, which would totally stabilize, but it revealed only red removal and another Spite/Malice. Zvi then untapped, played a Galina's Knight and said "Show me the Void." Despite his best efforts to use the Terminal Moraine to thin his deck in his upkeep, Frederico could not show him the card.

Both players stuck with exactly the same sideboards for game 3.

This time no one mulliganed, but Zvi managed to make a turn 1 Stormscape Apprentice and a turn 2 Crimson Acolyte which was Recoiled on turn 4, but replayed on turn 5. Meanwhile, Bastos was sending a couple of Lobotomies into Counterspells to try to wear down Mowshowitz's countermagic before his creature removal could take effect. On Zvi's sixth turn, he cast a main-phase Fact or Fiction with one island left open - it resolved:

He chose to take the land and the Voice and played an island. The only creatures he had been attacking with up to this stage were his Apprentice and Acolyte, but they had already dealt 8 damage between them. 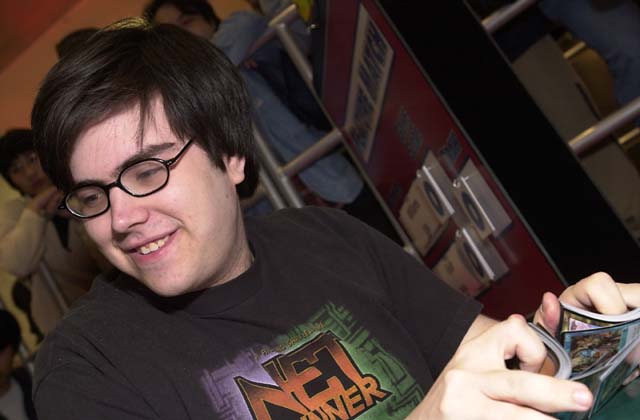 Frederico followed suit and cast his own main-phase Fact or Fiction which was Disrupted twice - but not countered - as he had 2 mana open - Zvi was just trying to cycle through his cards.

He took the two land and the Recoil.

The next turn was devastating for Frederico though as Zvi not only made his Voice of All "black" but also a Meddling Mage naming "Recoil" which he had cycled into with his Disrupts. Unperturbed, Bastos cast Malice on the Crimson Acolyte and made a Pyre Zombie, feeling like he might have been able to stabilize given that almost all the creatures could be killed by his creature-hammer, but with a big grin Zvi locked the game with a second Crimson Acolyte and a Meddling Mage naming "Void."