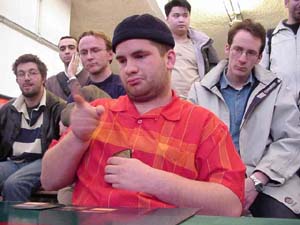 Dirk BaberowskiFlorent Jeudon's draft seemed to progress fairly smoothly as he had Wolfgang Eder drafting U/W/b to his left but Kai Budde was drafting G/B to his right, which inevitably weakened his picks.

Dirk Baberowski, the winner of Pro Tour Chicaco 1998, drafted B/U/w but wasn't at all happy with his deck.

Baberowski was busy shuffling and so he asked Jeudon to roll the dice for him and the Frenchman rolled higher for the German than he had for himself! It didn't help however as the action was started with a turn two Wild Mongrel from Jeudon which was met with turn three Rancid Earth from Baberowski. Jeudon was unfazed by this and kept laying lands and casting monsters. Baberowski had a Gravegouger in play but continued to be beated without blocking but after a Springing Tiger and Seton's Scout joined the Frenchman's team Berowski thought enough was enough and cast a Psionic Gift to ping the Scout and then next turn Patriarch's Desire killed the Mongrel and Ghastly Demise wiped the Springing tiger away and the board was left to the Gravegouger. Forent took this setback in his stride and continued to churn out creatures. A Faceless Butcher from Jeudon stole Baberowski's Gravegouger and when a Wild Mongrel and Springing Tiger hit the table Baberowski scooped.

Baberowski chose to play but had to mulligan his opening seven, then his next six but managed to draw five cards that were good enough to start. Whether he should have bothered is open to debate as when he laid his third Plains on turn four he commented that he only had four of them in the deck to power his splash colour.

A different coloured mana never showed up and Jeudon's Elephant Ambush tokens and a Leaf Dancer kept beating hard and all Baberowski could manage was a single chump blocker before he was killed.

Although understandably disappointed he was fairly philosophical as he now has enough Pro Tour points to qualify for the Masters event in Nice.