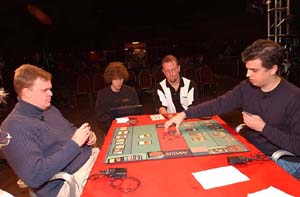 For Donnie Gallitz, it's good to be back. A boisterous character and one of the great old ones, Gallitz has had a relatively low profile on the Tour of late, and came to San Diego to make one last run. And what a run! With an invitation and plenty of cash guaranteed, Gallitz could easily become a fixture if not for a promise that this would be his last Tour. Across from him sits Frederico Bastos, the former Portuguese National Champion who rose to the public eye at the PT Tokyo Top 8 last year.

Bastos kicked off with Chatter of the Squirrel followed by Werebear. Gallitz went to the air with Lieutenant Kirtar, trading Auramancer for Bastos's Leaf Dancer. Bastos finally displayed red mana with a Ravaged Highlands. Gallitz raised his eyebrows in mock fear, saying "It's gonna get ugly now!". "Yes, it is." replied the mild Bastos.

But Gallitz wasn't idle. He had Mystic Crusader, and answered Barbarian Lunatic with Divine Sacrament, looking downright dangerous. "See this?" he asked, gesturing to his board, "Rare, rare, rare." Bastos just shrugged. "I have a good uncommon."

He needed that uncommon in a hurry. Gallitz's team took him to eight life. Thermal blast removed Kirtar. Bastos knocked Gallitz to twelve. The Crusader smashed for another three. Gallitz moved to cement his victory with Pilgrim of Justice and Kirtar's Desire on the Werebear.

Bastos made Millikin and passed back with four mana open. Gallitz untapped, and started to make a ply, then stopped himself. "This is weird," he said, "who does this?" He moved sacrificed Seafloor Debris and moved Aether Burst from his hand toward Millikin. "I can't do it! I can't cast it on this guy!" Somehow he found the gumption. The Burst was his seventh card in the graveyard, and the turned-on Crusader and Sacrament teamed up to kill Bastos.

Game 2 started with a Millikin from Bastos. It milled a swamp to be recovered by Cartographer. Gallitz tried Careful Study in response. He was informed it is a sorcery. He burned for one and sunk into his chair. The spell worked just fine during his mainphase, filtering lands out of his decks.

Bastos continued to power out dudes, making Krosan Archer and Barbarian Lunatic. Gallitz defended with Pilgrim of Justice. Aven Cloudchaser helped out. But Bastos was getting just what he needed. Ghastly Demise took out the Pilgrim and pushed through two more.

Overrun triggered an unprintable response from Gallitz. Lunatic, Millikin, Cartographer and Archer went to The Red Zone. Aether Burst sent the Lunatic home, and the Bird Soldiers doubled-up on the Millikin. Gallitz lost Kirtar, and was at three. 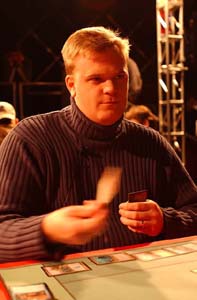 Gallitz tried to hold on with Embolden. "I'm not going down without a fight!" he shouted. He was, however, going down.

In the third game, Gallitz Peeked at Werebear, Overrun, Skyshooter, Demoralize and lands, a scary grip. He used a Study to get to some land, losing Embolden and Scrivener. Mongrel came down off the top. Gallitz was stuck on just two Seafloor Debris and an island, bemoaning his lack of white mana. He sighed and blew up a Debris to make an Auramancer, thereby stopping two damage a turn.

Psionic Gift showed up just in time to stop Druid Lyrist. Desperate for more breathing room, Gallitz sacrificed his other Debris, Desiring the Mongrel. Bastos thought hard, clearly not liking any of his options. He had no removal for the enchanted Auramancer. It took down the Werebear. Gallitz found another island and made a very sad Sandstone Deadfall. Reconnaissance from Bastos pulled up a swamp.

But Gallitz made a go of it. He Syncopated Frenetic Ogre, then drew two consecutive plains to bust out Lieutenant Kirtar, emptying his hand. Cartographer was all Bastos could muster. Gallitz ripped Patriarch's Desire and Cabal Pit to cast it, eliminating the Skyshooter and putting Kirtar on the offensive. Bastos's Barbarian Lunatic did little more than force the play of Embolden.

Three turns later, Gallitz would be attacking for the win on his turn. Bastos held eight cards. "Do you know what I have?" he asked. "Well," said Gallitz, "I know you've still got Overrun and Demoralize." Bastos put them on the table, then revealed the six lands that filled out his hand.

In Game 4, Gallitz kept Bastos off-tempo with a pair of Aether Bursts, while he once again established a board of Divine Sacrament, Mystic Crusader and Lieutenant Kirtar. Bastos finally got to keep his Krosan Avenger in play.

Gallitz Peeked, and didn't like what he saw. Springing Tiger, Millikin, Thermal Blast, Krosan Archer, Frenetic Ogre and Rabid Elephant. He was hitting for three in the air, though, so all was not terrible. Kirtar's Desire stopped the Avenger.

But now Bastos was exploding. Skyshooter and Millikin came down, threatening big turns. And apparently it was Gallitz's turn to be flooded, as he pulled land after land. He got one more hit in before Skyshooter came on line. He then had to use Kirtar to take down Rabid Elephant.

Pilgrim of Virtue was no match for Bastos's fatties. Druid Lyrist showed up to make sure the Sacrament would not be a problem. Bastos started throwing down. First Frenetic Ogre then Dwarven Strike Force. The Crusade made Bastos wait until threshold before striking. Bastos accidentally tapped out of green one turn, but the Psionic Gift came a turn too late.

Bastos swung with Tiger and Crusader. Gallitz let them through. They struck again. This time Gallitz blocked the Strike Force with his Crusader. Bastos blew up the Sacrament with his Lyrist and Thermal Blasted Patrol Hound to put Gallitz at threshold, then used Skyshooter to take it down. Next turn he attacked all out to force Game 5. 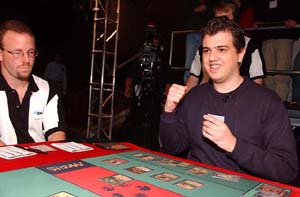 Gallitz fanned his opener and saw plains, swamp, Aether Burst, Scrivener, Careful Study, Kirtar's Desire and Aven Windreader. He stood up. "I'm just gonna take a look around, remember what all this looks like." He packed it up and drew six. Frowning, he kept.

On his first turn he showed Careful Study. Bastos laughed nervously "Whoa, Careful Study? Double-Mulligan!" Nevertheless, it got Gallitz to his second land at the cost of Aven Flock and Auramancer. Bastos started the beats with Wild Mongrel.

But this was to be an object lesson in the art of not counting Gallitz out. Ripping two land off the top, Gallitz busted out Aven Smokeweaver. They traded hits. Bastos hit five land but had no play at all!

Gallitz, stuck at four land, pounded the top of his deck, but it would not yield. It didn't need to! He was actually ahead in the race, especially thanks to the Kirtar's Desire that stopped the Mongrel. He Peeked at Bastos, seeing Liquid Fire and five lands to go with the five he had in play! Still muttering under his breath, Gallitz said "Now the game goes really bad." The comment made Bastos laugh out loud. "Oh yeah! What am I going to do? Shoot you with my lands?"

Twice Bastos had no play on his turn. Auramancer came out when Bastos was at eight. He refused to Liquid Fire it, hoping to draw something amazing. He pulled Werebear. He was five cards from Threshold. He shrugged and passed it back.

The two were an interesting contrast. Gallitz frustrated, shouting, swearing and slamming his deck despite being in a winning position, and Bastos getting the most ridiculous land glut ever and facing elimination, but still smiling and laughing.

Gallitz pulled Psionic Gift to stop the Bear, and Bastos pitched his land to the Mongrel to give himself Threshold. Liquid Fire took out the Auramancer, but on Gallitz's next turn he pulled Aether Burst, and there simply wasn't enough time for Bastos to fight back. Gallitz swung for the final two to the cheers of his supporters.