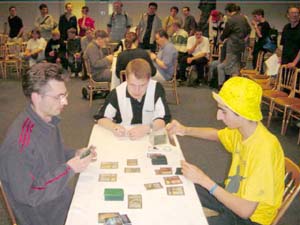 After a bit of friendly banter between the players, Warren won the coin flip and elected to play first. Both players had their fans in the crowd holding up pieces of paper with the names of who they were supporting printed on them.

Gabriel mulliganed his opening hand and Warren was first to make a play with Gaea's Skyfolk and then next turn a Penumbra Bobcat. Meanwhile, Gabriel had nothing to do except play out land. At the end of his turn, Gabriel used Ice to tap one of Warren's lands to draw into another card and then played Urza's Rage on the Gaea's Skyfolk when it attacked.

Gabriel tried for a Skizzik with kicker and both players speculated for some time about whether Warren had Exclude. Sure enough, the Skizzik resolves, but was bounced before it could do damage with Repulse.

Warren looked less that pleased with his hand and ponders what to do for some time leaving four mana open. Gabriel didn't replay his Skizzik and just passed the turn and took more damage from the Bobcat. Marsh followed up his attack by putting Kavu Titan and Gaea's Skyfolk into play and Nassif took the opportunity to use Prophetic Bolt on the Skyfolk.

During his next turn Gabriel put the Skizzik into play along with a Meddling Mage and looked to have the advantage until Warren put a kicked Kavu Titan into play. Lightning Angel joined Gabriel's army and all Warren could do was nod his head. Gabriel took plenty of time to decide whether he should attack with his Skizzik or not and finally decided to and Warren took an equally long amount of time to decide whether he should block or not. In the end he accepted damage and things looked a bit scary for both players as they were both low on life, both sporting creatures in play with large damage potential and both playing all sorts of instant speed effects which could affect the outcome of the game.

Warren returned the attack by turning all of his creatures sideways and Gabriel tried to decide on his best plan of action, shuffling the cards in his hand nervously. Before blockers the Bobcat was the target of an Urza's Rage. Some damage still went through to Gabriel though and Warren revealed the Prophetic Bolt in his hand for the game. 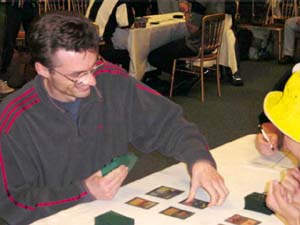 Warren thought for a long time about whether to keep his hand and then joked that he should flip a coin to decide, like he did earlier in the tournament. Finally, he decided to mulligan his one land hand.

A Meddling Mage naming Exclude was the first play to be made by Gabriel. Warren immediately made a sound like it was the wrong choice and Gabriel looked disheartened. Warren played a Blurred Mongoose in his turn and continued with the banter, blocking the Mage with the Mongoose when it attacked next turn. Gabriel had a backup Mage though and kept his original choice of Exclude.

Warren tried for a Bobcat, which was bounced with Repulse and gave Gabriel the window to play a Lightning Angel and attack freely with both his monsters.

After the Bobcat came back into play Gabriel continued the pressure with Skizzik (kicked) and served for a large amount of damage. Warren was stuck on three land and tried to joke that he was having difficulty deciding on whether he should play any more land or not but his fate was sealed after Gabriel put another Lightning Angel into play and dealt lethal damage. 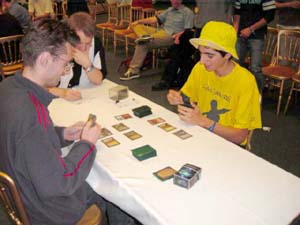 Warren's opening hand presented some difficulty in whether he should keep it and put his head on the table with his eyes shut trying to think if he should keep it or not. He eventually decided to mulligan it as it only had two Islands but he was first out of the gates with a Gaea's Skyfolk.

Gabriel had an early play too with a Goblin Legionnaire, though his was Repulsed by Warren. He looked glum on his next turn, replayed the Goblin and made a Coastal Tower.

After thinking about what to do on his turn four Warren settled on a Jade Leech which got an appreciative "ooh" from Gabriel.

Onlookers sucked in their breath in sympathy the next turn when Gabriel used a kicked Jilt to bounce the Leech and kill the Skyfolk. It returned the next turn and this time it was Gabriel's turn to look pained as he didn't appear to have an answer to the fat Leech and just played Meddling Mage (naming Flametongue Kavu) and a backup Legionnaire.

Warren pondered his turn for a long time and Gabriel just clutched his head in his hand, telling Warren that his hand was terrible. Warren didn't appear to want to trade his Leech for the two Goblins and only made a Blurred Mongoose, passing the turn.

Gabriel tapped the Leech with Ice, which Warren didn't like very much. He still managed to retort that Gab should try to play his Lightning Angel as he'd sideboarded in Gainsay. He obviously believed him as he didn't cast a creature before his attack phase and attacked with his small army. Warren tried for Fire on the Mage but Gabriel slapped Disrupt on the table and made Warren wince as he was tapped out.

The Mongoose blocked the Mage, which prompted much thinking from Gabriel as it could imply that Warren did have a Flametongue in his hand and he kept his Mage alive by using the damage prevention ability of the Legionnaire.

Gabriel paused Warren during his upkeep when he had two mana open and Warren tried to convince him that he had nothing to do and begged him not to be a "savage cheat". Things were looking grim for Warren as he thought for ages about his play, holding his cards up close to his face. He decided on Prophetic Bolt on the Meddling Mage, this time leaving mana open for Disrupt. The Bolt resolved and Warren selected Repulse from his choice of Forest, Penumbra Bobcat and Blurred Mongoose - his only other card in hand was indeed a Flametongue Kavu.

Next turn Ice resolved, tapping the Leech, Gab drew and exhaled a sigh of relief, playing another Legionnaire, attacking and leaving three mana open. Warren put his Flametongue on the table and tried to target the untapped Goblin to which Gab responded by shooting Warren.

The Leech attacked Gabriel and responded by casting and serving with Skizzik and the Legionnaire. The Goblin was blocked and the Skizzik bounced with the Repulse, leaving only the Leech in play.

Warren was in trouble and held back the Leech to block the Skizzik but after Warren blocked, the Leech got Repulsed, and the Skizzik's damage went trampling through to Warren. He graciously conceded by picking up Gabriel's deck, stealing a Jilt and trying to cast it.