New-School Pro Tour Sensation Gadiel Szleifer has shed his Bad Boy image in exchange for a reasonable haircut and a quiet, focused attitude. His performance this weekend cements his reputation as one of the top up-and-coming players. When asked about his quarterfinal matchup, he was confident, but not cocky. Interestingly, Szleifer chose to test all of his games post-sideboarding. 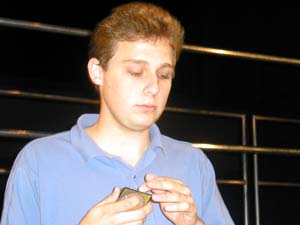 Jeff Novekoff raced out to an early lead.

His opponent, newcomer Jeff Novekoff, is playing an interesting variation on the base-black-green control decks. His version adds Seshiro, Sosuke's Summons, and Umezawa's Jitte to allow for a beatdown game plan against decks that are unprepared for it.

Novekoff's first play was an Elder on the second turn, mirrored by Szleifer after he dropped Sensei's Divining Top. They both searched in combat, and Novekoff followed up with Kodama's Reach. Szleifer did the same on his turn.

Now that they had accumulated some mana, it was time to play some threats. Novekoff showed Seshiro, the Anointed. Szleifer made a Meloku with one mana up. Novekoff got himself a Jitte, equipped, and swung in, eating a token and getting some counters. His next trick was a Time of Need for Myojin of Night's Reach -- bad news for Szleifer.

He untapped and swung with Meloku, trading up for Ink-Eyes and getting a free Elder. A Jitte counter cleared the way for Seshiro and then down came the Myojin. He wiped out Szleifer's hand after he drew. Szleifer kept Ink-Eyes at home.

Novekoff wasn't done yet. Another Time of Need got his own Ink-Eyes and sent them both packing that was enough to get Szleifer to shuffle up for the second game.

Szleifer had to mulligan in Game 2 and settled on a four-land, two Nezumi Graverobber hand. He led with one 'robber and Novekoff saw what was up when he missed with Psychic Spear. Szleifer's hand had not improved. 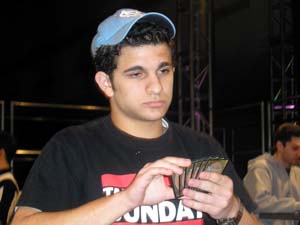 Gadiel Szleifer is in his second Top 8 this season.

Szleifer ripped Kodama's Reach and hit with the Robber. Novekoff played one of his own and they traded. Szleifer played his back-up copy. Novekoff popped a Cranial Extraction to rid Szleifer's deck of Ink-Eyes while Szleifer worked over his graveyard. He hit for two and had no further play, waiting on his mana.

Novekoff was off-tempo, needing to spend a turn tutoring up an Ink-Eyes. Meanwhile Szleifer flipped his Graverobber, hit for four, and played a second. Novekoff dropped Ink-Eyes and got ready to turn the tide. Unfortunately for him, Szleifer had Sickening Shoal, pitching Kokusho. Facing six points of beats and a reanimated Ink-Eyes, Novekoff scooped.

Szleifer could not argue.

Szleifer re-tuned his deck for the third game:

Szleifer kicked off with a Top while Novekoff played Time of Need for a Kodama of the North Tree. Szleifer had Nezumi Graverobber ready, but saw just how easy things were going to be when Novekoff burnt another Time of Need on Myojin of Night's Reach and failed to play a third land. 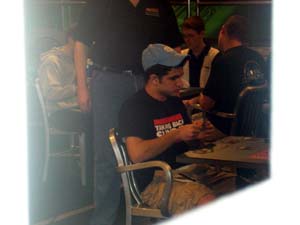 Szleifer shined through to the semifinals.

Szleifer added a second Graverobber to the board while Novekoff drew more spells. After two turns he collected his cards in disgust.

"Shouldn't have cast Time of Need," Novekoff muttered. "Of course the forest was on top instead of the ol' mathematical probability."

"Well, at least you got manascrewed when I had the nut-high draw," Szleifer said.

"You weren't winning that game."

Unfortunately for Novekoff, his luck wasn't any better in the fourth game. He mulled to six, then was stuck with a hand of forest, THREE Kodama of the North Tree, Sakura-Tribe Elder, Umezawa's Jitte. He drew non-lands for three turns and then the match was Szleifer's.

"Don't worry about it," was Novekoff's answer.

Gadiel Szleifer defeats Jeff Novekoff 3-1 and earns a cool $2,500 and a spot in the Pro Tour-Philadelphia semifinals.