Quarterfinal
Geists of Past and Present

Before his quarterfinal match, I asked Hall of Famer Jelger Wiegersma how he felt about the imminent match against likely future inductee Paulo Vitor Damo da Rosa. True to form, Wiegersma gave a wan smile and shrugged. "I'm looking forward to playing some Magic". The Dutchie, who now lives in the Netherlands Antilles, has always been one of the more chilled out players on the Pro Tour, and being under the lights for another Pro Tour top 8 did not seem to phase him.

Paulo Vitor Damo da Rosa (PV) practically lives in the Top 8 when it comes to Pro Tours. With nine Top 8s in thirty appearances, PV is batting 30% on making Top 8 at the Pro Tour, which is frankly just a little ridiculous. He, like Wiegersma, has a single win as well, something that either player would surely like to build on. 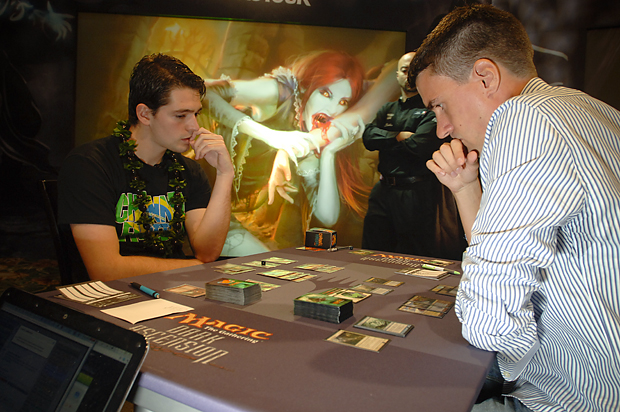 In this quarterfinal match? One Hall of Famer from the past, and one who may be one in the future. Jelger Wiegersma and Paulo Vitor Damo da Rosa get their match started.

PV was on the play having finished higher in the Swiss rounds of the tournament, and led with a turn one Rootbound Crag. For Wiegersma it was a pair of copies of Gitaxian Probe, which revealed two copies of Solemn Simulacrum, Kessig Wolf Run, Inkmoth Nexus, and Copperline Gorge.

Wiegersma had the early action in a turn three Lingering Souls, while PV accelerated his mana with the first Solemn Simulacrum. That seemed like a reasonable plan to Wiegersma too, using Phantasmal Image to get his own copy of the 2/2 golem, before flashing back Lingering Souls. PV used Kessig Wolf Run to kill off the illusion, but this did let Wiegersma draw a card, so he couldn't have been too unhappy with the exchange.

PV was the one getting the early hits in, aided by those early copies of Gitaxian Probe from Wiegersma. Wiegersma tried to pump his team with a Drogskol Captain, but was soon using a Vapor Snag on his own creature when PV showed that he had a Galvanic Blast.

While PV had taken a mulligan in the first game, he was soon well up on land, playing another Solemn Simulacrum, and both Sphere of the Suns and Birds of Paradise to accelerate his mana further. A Delver from Wiegersma failed to flip in the first instance, and PV had a second Galvanic Blast when Wiegersma tried for another.

Wiegersma had to keep things simple. He just got in for 4 in the air, and used another Lingering Souls to go up to six spirit tokens in play alongside his Delver of Secrets. While PV was now low on cards in hand, he did have creatures, and Kessig Wolf Run to pump them. This forced Wiegersma to do a bit of blocking.

An Inferno Titan completely changed the face of the board, killing off Delver and two of Wiegersma's spirit tokens. While Wiegersma had a few creatures left, it seemed likely that they would fall to Inferno Titan, who, when aided by Kessig Wolf Run, would be a massive threat. Wiegersma calmly played a Lingering Souls and attacked for 2, taking PV to 8. He used Vapor Snag on Inferno Titan, and while he did then lose more tokens to the replay, he had to do whatever he could to stay in the game.

Snapcaster Mage let Wiegersma cast Vapor Snag from the bin to take out a Birds of Paradise, and drop PV to 6. Wiegersma then untapped into Ponder on his turn, and took a moment to assess his options. He used Dungeon Geists to tap down Inferno Titan and attacked with Snapcaster Mage, which traded with an Inkmoth Nexus. 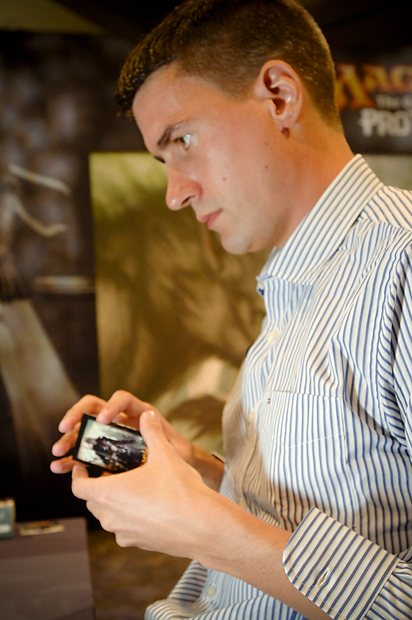 Wiegersma locks up an Inferno Titan with his Dungeon Geists.

Wiegersma had one card in hand, and PV was clearly concerned that it might be another Vapor Snag, which would mean pumping in a big way with Kessig Wolf Run could be problematic. He attacked with a pair of copies of Solemn Simulacrum and when Wiegersma blocked each, PV pumped one enough to kill off Dungeon Geists.

Snapcaster Mage allowed for a second bite of the Ponder apple for Wiegersma, who shuffled, looking for an answer. When he didn't find one, he scooped up his cards. It was on to the second game.

"I really hate losing. It's not fun," remarked Wiegersma with a small smile playing on his lips. "That was a nice Titan to draw..."

PV couldn't help but agree as he sideboarded in preparation for his second game, this time on the draw. PV took his second mulligan of the match, but seemed quietly confident in his six.

Wiegersma started on a Ponder, which he parlayed in to a Delver on the second turn. PV was quick to get out of his mulligan, with a Rampant Growth on turn two swiftly putting him ahead on mana. Wiegersma would have to work fast to take things before PV's mana got out of control.

Delver of Secrets flipped into Insectile Aberration at the first chance, and after attacking, Wiegersma used Snapcaster Mage to replay his Ponder, having already checked the state of play by using Gitaxian Probe to see that there was Huntmaster of the Fells, Inkmoth Nexus, Whipflare, Mountain and Primeval Titan in PV's hand.

Huntmaster of the Fells came down for PV, and the wolf token that he brought soon did for Wiegersma's Snapcaster Mage. Wiegersma had Lingering Souls to keep creatures on the board, but would likely struggle to put too much pressure on in the face of the Huntmaster.

PV chose to not make a play for his turn, so that his Huntmaster would flip. Wiegersma was able to save Insectile Aberration with Mutagenic Growth, and used another Gitaxian Probe to see how the landscape of PV's hand had changed. Now it had Whipflare, Galvanic Blast, Primeval Titan and Thrun, the Last Troll. That's a fairly threatening group.

Wiegersma had to keep attacking, and sent his two spirit tokens and Insectile Aberration in. PV used a Galvanic Blast for the 3/2 and took 2. Wiegersma used Dungeon Geists to lock down Huntmaster of the Fells, but given that it could still flip, it seemed likely that he would only be able to rely on his Geists to slow things down a touch. 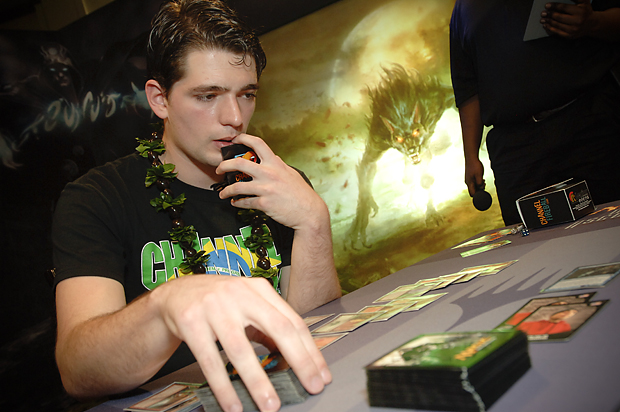 PV, looking at all of the angles in his match.

Wiegersma flashed back Lingering Souls. With four tokens on the board, along with Dungeon Geists, it had to be tempting for PV to cast Whipflare. Wiegersma only had two cards left in hand, but doing so would kill off Huntmaster of the Fells as well. PV waited, knowing that the long game was his. By passing, PV was able to flip his Huntmaster again, putting two damage on Dungeon Geists, which was enough to tempt it not to come in. Wiegersma attacked with the rest, putting PV to just 7 life, and had Dissipate ready to stop a Galvanic Blast that might have killed his Dungeon Geists.

PV finally decided it was time to pull the trigger on using board sweepers. He cast Slagstorm, which was hit by Mana Leak, followed by Whipflare, which resolved. The two spells were enough to get Huntmaster of the Fells flipping again, but that wasn't really the important bit. The real dagger for Wiegersma was that it meant that the way was pretty clear for Thrun, the Last Troll. Attacks from the last Troll put Wiegersma in range of a second Slagstorm to end the game.

Both players had mulligans for the third game, and Wiegersma on the play started with a Ponder. He didn't have a turn two play, and was quick to use Snapcaster Mage to Ponder again on turn three. PV was a little slower to start, not playing anything for the first three turns. A Gitaxian Probe showed two copies of Galvanic Blast, Whipflare, Thrun, the Last Troll, Primeval Titan and Huntmaster of the Fells. He needed one more land to really get his hand going and start making threats.

The first threat from PV was Thrun, the Last Troll, who got hit by a Phantasmal Image. PV was not quick to play further cards into Mana Leak, neglecting to cast Huntmaster of the Fells on his next chance. He used a Galvanic Blast to kill off Snapcaster Mage, such that he was under little pressure, and passed, biding his time.

Wiegersma was a little light on lands, and left most of them open on each passing turn, representing countermagic. It wasn't until PV had got up to seven lands that he cast Huntmaster of the Fells, which resolved without incident.

Wiegersma was fighting for his tournament life, and did so with Lingering Souls and Drogskol Captain. The Captain died to Galvanic Blast, but Wiegersma soon found another. Again PV had the blast. While Wiegersma was able to attack PV down to 10, he seemed a long way off being able to get the second half done before PV was able to stick something huge.

A Whipflare completely cleared the board, onto which PV cast Thrun, the Last Troll. Wiegersma was on 12, and didn't have much time to answer the hexproof creature. He elected to make some hexproofcreatures of his own, a Drogskol Captain and a second copy thanks to Phantasmal Image. That would be 6 damage right there. Could this be a race that Wiegersma could win?

PV attacked Wiegersma to 8, and cast a Primeval Titan, threatening the kill the following turn.

"Am I dead?" asked the Brazilian.

"I doubt it," remarked Wiegersma before his draw. PV knew that a combination of Drogskol Captains and perhaps Mutagenic Growth could do for him, but was clearly willing to take the risk from two games up.

Wiegersma, in rough shape, attacked for just three, before casting and flashing back Lingering Souls. He had to last one more turn with at least three creatures in play and he would have a chance to get his first game of the match.

PV attacked in with the Troll, aided by a terrifying amount of lands and Kessig Wolf Run. While Wiegersma had a Snapcaster Mage to block, Kessig Wolf Run was plenty big enough to close out the match. 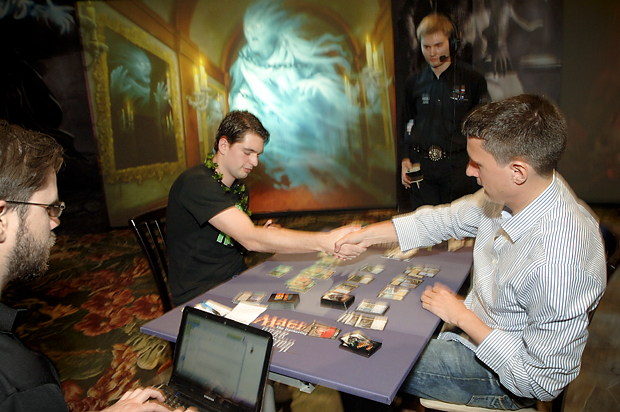 PV sweeps through his match against Hall of Famer Wiegersma, keeping his hopes of a second Pro Tour win going.