Quarterfinal: Glare Mirror No Match at All

Mori cannot be stopped. His lengthy resume speaks for himself. Among Japanese pros, Mori consistently gets props for his rapid, virtually error-free play style. This is the first time for the former Rookie of the Year to play on a Sunday at a Pro Tour. 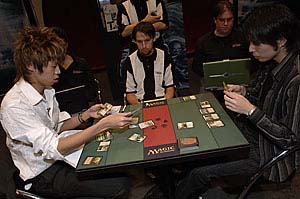 Two of Japan's four Top 8 competitors met in the quarterfinals.

Shuhei Nakamura, on the other hand, has experience under the hot lights. Having helmed aggro decks to his previous high finishes, he was glad to be playing control for once. He griped to the Japanese reporter, noting that Mori's sideboard was going to wreck him. If by chance Nakamura could pull out a match win, he expected to play another torturous mirror match against Kaji. Mori just smiled.

With only a few cards difference between the two decks, the regular strategy of Glare of Subdual and token generation wasn't going to be easy to pull off. On the surface, the games presented a struggle to out-produce the opponent and win the resource war. Pithing Needles could turn Glare of Subdual and Umezawa's Jitte into dead draws, but Seed Spark posed serious threats.

Both players knew that the deck's trademark combo was nearly useless in this match. Yosei, the Morning Star's loyalty was the key factor. An efficient 5/5 flyer coupled by a punishing death trigger promised to sweep away any opposition. Winning the matchup without Yosei's dominance looked impossible.

The first game started well for Nakamura. Both players disliked their hands, and shipped them back. Soon enough, Nakamura's Loxodon Hierarch attacked into Birds of Paradise and Selesnya Guildmage. Mori played a Congregation at Dawn, putting a single copy of Yosei and Arashi, the Sky Asunder on top of his deck. Nakamura used his own Congregation to dial up two Yoseis and Arashi. He sent his Hierarch at Mori's second Yosei, and used a channeled Arashi, the Sky Asunder to keep the big giant from blocking. 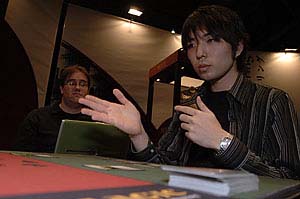 Nakamura had no answer to Mori's flood of legends.

Using Congregation at Dawn to search out only two creatures was a clear signal Mori had fuel in reserve. Mori made a Kodama of the North Tree, followed by yet another Yosei. Nakamura's Hierarch and active Vitu-Ghazi, the City-Tree couldn't catch up.

Mori dismissed the win, saying it was just a random fight. He didn't see any great plays he made. Both players switched over to the Greater Good configuration.

True to form, Mori maintained his rapid assault in the second game. Nakamura's double mulligan did him no favors. Mori cranked out mana with Llanowar Elves and Wood Elves. Using a Llanowar Elf, Nakamura was able to make a second turn Selesnya Guildmage, and followed that up with an Umezawa's Jitte.

Mori Naturalized the older player's Jitte before making one of his own. Nakamura tried to come back, but Mori's Wood Elves charged over and eliminated two of Nakamura's mana sources. Nakamura quickly scooped. He couldn't overcome a double mulligan and a Jitte.

Nakamura silently calculated his odds, while Mori relaxed. He didn't need any of his explosive sideboard tech to win the matchup. 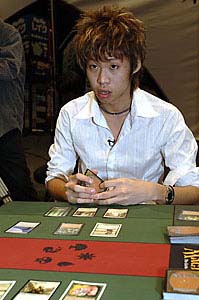 Mori was helped greatly by Kodama of the North Tree.

Mori opened with a Birds of Paradise and Umezawa's Jitte, following it up with Wood Elves. Nakamura's board just couldn't catch up. He made a Selesnya Guildmage and a Glare of Subdual to keep Mori's Jitte at bay. He followed that up with a Naturalize and a Jitte of his own. To his dismay, Mori also had a Naturalize up his sleeve.

Mori kept the pressure on with Yosei, the Morning Star. Things looked good for Katsuhiro, but he didn't give himself the luxury of smiling. Nakamura cleared Yosei away with Wrath of God, but that wasn't enough.

Mori dialed up Kodama of the North Tree, and followed up with yet another Yosei. Nakamura groaned with disgust. His hand was jammed with three copies of Greater Good and an irrelevant Naturalize. He offered the concession, and Mori finally let loose and smiled. The two shook hands, and Nakamura wished Mori good luck.

Despite his awful draws in Games 2 and 3, Nakamura commented that he knew the match was over after losing Game 1. His sideboard couldn't match Mori's. The first-round loss pulled the plug out of Nakamura's bath, draining his confidence.

Katsuhiro Mori defeats Shuhei Nakamura 3-0 to advance to the semifinals.