Quarterfinal: A Good Draw, That Tarmogoyf

2010 US National Champion Josh "wrapter" Utter-Leyton is kind of a big deal. One of the titans of the incomparable team ChannelFireball, Utter-Leyton's first PT Top 8 came last year in San Juan, where he lost to teammate, polar opposite, and eventual champion Paulo Vitor Damo da Rosa in the quarterfinals. He's the only player under the ChannelFireball banner who made the Top 8, and he surely wants to bring home the gold. 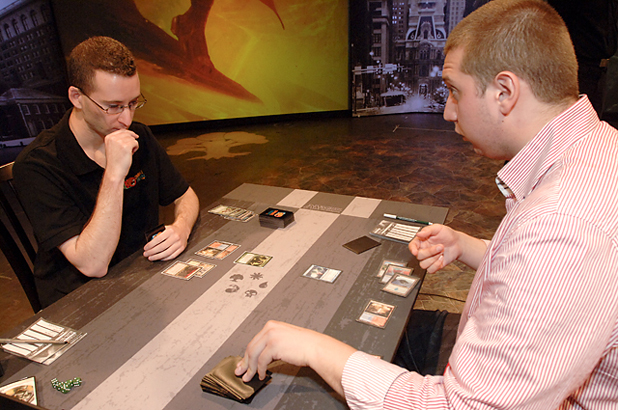 His opponent, Alessandro Portaro, is enjoying his first taste of the Sunday spotlight. Portaro earned his invitation to the Pro Tour the old fashioned way, taking down a PTQ in Milan. Faced with a wide-open format, decided to stick to the raw power of combo. Unfortunately for him, his creature-based Pester Splinter Twin deck is exactly the sort of thing Utter-Leyton's deck is designed to prey on.

Utter-Leyton won the die roll and started comparatively slowly, with only a second-turn 1/2 Tarmogoyf. Portaro played out Island and Mountain, biding his time. A fetched Sacred Foundry put Utter-Leyton down to an irrelevant 14, and he tried Knight of the Reliquary. Portaro Remanded. The following turn Utter-Leyton went for a second Tarmogoyf and was Remanded again, but he had a fourth land to recast it immediately.

With Utter-Leyton tapped out, Portaro was free to play a main-phase Pestermite, untapping a land to bring along Spellskite. Path to Exile turned the Spellskite into an Island, clearing the path for the 2/3 Tarmogoyfs. Portaro fell to 12. Tectonic Edge wiped out Cascade Bluffs, Portaro's second red source, and Utter-Leyton added a Wild Nacatl to his squad.

Portaro wasted no time putting down Grove of the Burnwillows and tapping four for Splinter Twin. Utter-Leyton tapped his last mana for Path to Exile, but of course Portaro was ready with Dispel, taking the first game.

This time Utter-Leyton led with the gold standard of zoo openings, a fetched dual land for Wild Nacatl. Portaro played a tapped Steam Vents and watched as Utter Leyton played Green Sun's Zenith for a second Nacatl and attacked for 3. Portaro put out a Spellskite to stem the bleeding. Utter-Leyton swung in, dropping Portaro to 14, then passed on three mana. 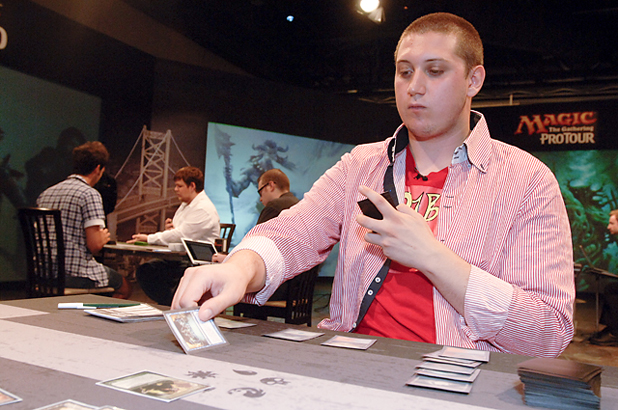 Portaro takes a quick game one.

"Nice," was all Portaro could say.

Portaro offered Slagstorm to Utter-Leyton, who declined to counter, instead putting his Nacatl in the bin. Portaro Pondered and passed. Utter-Leyton took away his Cascade Bluffs with Tectonic Edge, then swung in for 5 with his Tarmogoyf, leaving Portaro at 5. Lastly, he cast a Green Sun's Zenith for zero to get Dryad Arbor.

Portaro Preordained and kept both, then replaced his Cascade Bluffs and passed the turn. He tried to stop Utter-Leyton with a Pestermite, but Unified Will gave wrapter the game.

While they shuffled up, the camera crew moved in to cover their match. Portaro didn't like the look of his opener and so went down to six. With a frown, that quickly became five... and then four.

He opened with Scalding Tarn, getting a Steam Vents after Utter-Leyton fetched a Forest to play Noble Hierarch. After Portaro played his second land, Utter-Leyton added a Wild Nacatl to his board and hit for one. Portaro got rid of the Hierarch with Punishing Fire at end of turn, played a third land, and passed. Utter-Leyton played a Dryad Arbor and hit for 2 with his Nacatl. 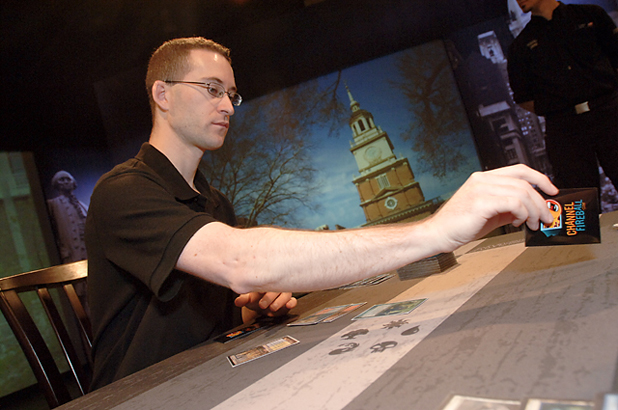 Four land for Portaro, and a Spellskite. Utter-Leyton tried Unified Will and was Remanded. Portaro was left with just a single card in hand. Qasali Pridemage and Stomping Ground let the Nacatl hit for four, and the Pridemage took care of the Spellskite before blockers. Portaro was down to eleven. He played a second Punishing Fire to get rid of Dryad Arbor. The Nacatl hit him to eight and was joined by Tarmogoyf. After seeing his next draw, Portaro conceded.

This time Portaro got to play with a full grip, and led with Island, Ponder, keeping the cards on top. Again, Utter-Leyton fetched Forest and played Noble Hierarch. Portaro landed a Spellskite, and watched as Utter-Leyton brought down a Knight of the Reliquary, already a 4/4. Slagstorm took care of the Hierarch. Another fetch made the Knight a 5/5, and it brought Portaro to 15. Utter-Leyton played a second Knight, and passed. 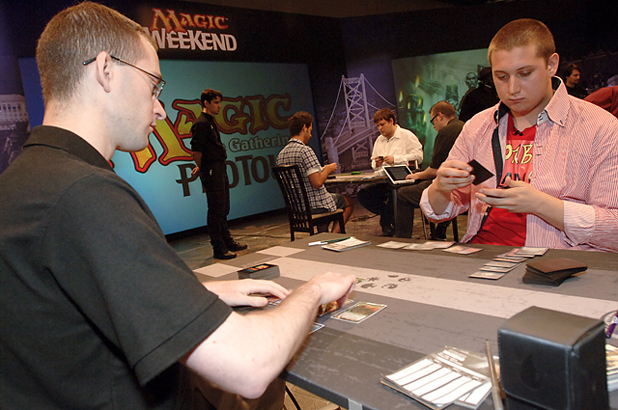 Portaro wore a look of concentration as he Preordained, sending both cards to the bottom of his library. He paid 4 life for Dismember on one of the Knights and passed the turn back with two mana open. Utter-Leyton tried a Green Sun's Zenith for two, and it resolved. He got Qasali Pridemage, attacked, and blew up the Spellskite. Portaro was down to 5 life. He untapped and drew with a look of resignation on his face, then looked up at his opponent and extended the hand in congratulations.

Josh Utter-Leyton defeats Alessandro Portaro 3-1 and advances to the semifinals!