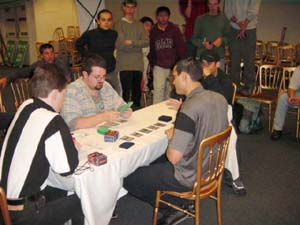 This quarterfinal saw Austria's Helmut Summersberger playing a black/red/blue control deck against the Domain deck of Frenchman Pierre Malherbaud. Pierre's deck features four copies of Destructive flow, a punishing enchantment in this nonbasic land heavy environment. That is backed up with straight land kill spells like Implode and Dwarven Landslide. The kill is provide by hard to deal with creatures like Sabertooth Nishoba and Spiritmonger with more fat to be found in the board.

The match got off to a very unexciting start as both players laid land and passed the turn with two opts being the only spells cast before turn five. Pierre then successfully cast a Dwarven Landslide on one of Helmut's Islands as Helmut declined to counter. The next significant play was a Fact or Fiction by Helmut that got him an Island, Spite/Malice and Urza's Rage. The slow pace of play definitely seems to favor Helmut as Pierre is failing to apply any real pressure to his mana base. An Implode was met with a Prophetic Bolt in response and the land was replaced next turn.

Pierre seemed to have an answer for Helmut's growing mana base however, casting a Global Ruin taking him down to three land and his opponent down to two. Helmut had obviously thought the match through, and played out an Island he was holding which enabled him to Undermine a Vindicate aimed at his lone Swamp. This had the beneficial side effect of dropping Pierre's life down to eight. Pierre replied with a Destructive Flow, which caused a long consideration from Helmut before he let it resolve. The flow crept up on Salt Marsh in Helmet's upkeep but he was undaunted as he sensed that he had Pierre on the ropes and summoned Nightscape Familiars on successive turns, the last putting Pierre on a two turn clock. It did not take that long, however, as Helmut Undermined an Implode that Pierre was using to try and draw an answer. 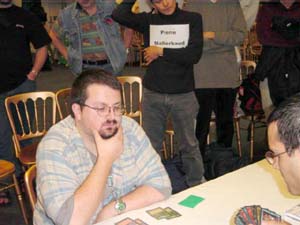 This game was a lot quicker than the previous one. Pierre only had two land for the first few turns, but this was overcome by using two fertile grounds to create a super-land. Helmut threatened a Recoil but of course Pierre had seen his deck list and knew this not a danger. The tone of the game changes however when Pierre successfully cast Harrow and Destructive Flow. With only one non basic land in play, this presented a problem to Helmut and one that his deck did not have an answer for particularly since Pierre was continuing to hit his land with one-off kill spells.

A double kicked Rakavolver threatened to put a quick end to Helmut, but it was Repulsed and Pierre decided he did not need it to win and continued to hit Helmut's remaining land. When Pierre played his sole copy of Yawgmoth's Agenda with a fully stocked graveyard and Rakavolver still in hand, it did not take long for Helmut to concede. 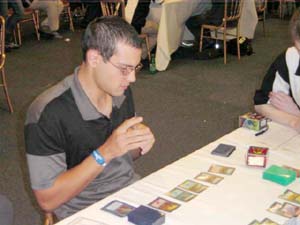 Both players kept their opening hands in game three and the game got off to a lot faster start with two Lay of the Land from Pierre and a Ravenous Rat from Helmut. With nothing to lose, Pierre went for the jugular with a early Destructive Flow which left Helmut in an apparently weak position consider his land at the time consisted of two non basics and an Island. Helmut instead chose to return the Rats to his hand with Repulse and replay them the following turn. Pierre continues his aggressive tact this game with a 4/5 Emblazoned Golem. Helmut does not seem worried by this and on his next turn calmly played a Mask of Intolerance which combined with the Rats allowed him to keep pace with the damage being dealt by the Golem. This was not a concern for long, however, as the Golem was killed with Malice the next turn.

Pierre bravely fought back with a Sabertooth Nishoba, which for a moment appeared to swing the game in his favor. Helmut had other plans and played his second Mask of Intolerance. The Masks dealt Pierre six damage in his upkeep, dropping him from a safe eleven to a precarious five and sure enough the Nishoba declined to attack. Helmut added a Nightscape Familiar to his offense but did not have regeneration mana available. Pierre then cast successive Vindicates to get rid of the Masks which would have killed him next turn and had enough mana left over for a Fact or Fiction, getting him Rith. Real ding-dong stuff, this. Helmut came right back with a Void for six getting not only Rith but also the Nishoba in play.

Pierre Vindicated the Familiar with Helmut tapped out and again the Austrian had to come up with a threat to finish the Frenchman or run the risk of him stabilizing with an Agenda or worse. A cheer went up from the crowd when he did this with style, playing his own dragon: Crosis, the Purger. Pierre could find no answer for it on his turn but still gamely Fact or Fictioned for his "fifth Vindicate" before conceding.