I've covered two feature matches this weekend where Josh Utter-Leyton emerged the victor. But then again, I also covered Grand Prix Kitakyuushu back in 2007, and Jun'ya Iyanaga won that, so as to which player I'm a lucky charm for, we'll just have to wait and see!

Having finished higher in the Swiss rounds (even if only slightly), Iyanaga got to play first in Game 1, fixing his mana with a Sphere of Suns and a Rampant Growth. Utter-Leyton was not slow to start either, with a Memnite, a Glint Hawk Idol, and a Tempered Steel. Iyanaga took down the Memnite with a Galvanic Blast, but sighed as he pondered his options under the Steel. He Rampant Growthed again and cast another Sphere of Suns. He now had access to six mana, if he could untap. 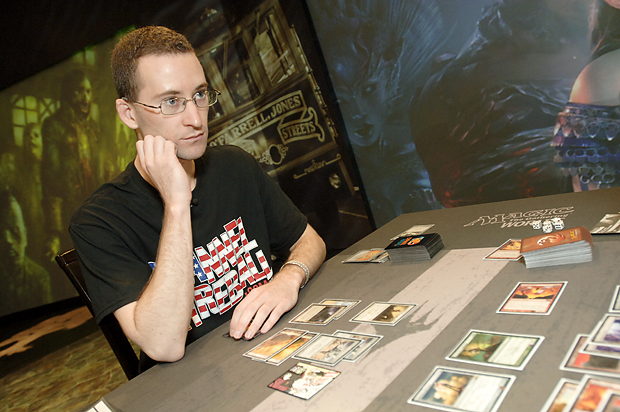 Josh Utter-Leyton enters the Top 8 as one of four Channel Fireball reps and still a contender for Player of the Year.

Utter-Leyton cracked open an Origin Spellbomb, untapped, and cast a second Tempered Steel, attacking Iyanaga down to 4. Iyanaga drew his card, and scooped up his cards.

As they shuffled for Game 2, Utter-Leyton asked Iyanaga how he went in the Magic Online Championship Series last night.

Both players kept their hands in the second game, Iyanaga leading with a Rootbound Crag, and Utter-Leyton with a Glint hawk, returning (and keeping in hand) a Mox Opal. Iyanaga Rampant Growthed on turn two, while Utter-Leyton attacked him down to 18. He then summoned a second Glint Hawk, and played an Origin Spellbomb. 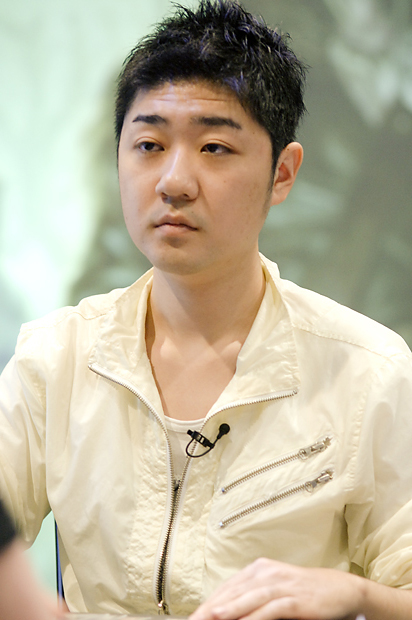 Jun'ya Iyanaga is the only Japanese player in the Top 8.

Iyanaga cast an Inferno Titan, killing one of the Glint hawks. Utter-Leyton made a Spirit token with Moorland Haunt, untapped, and cast Hero of Bladehold. The Titan attacked, taking down the Spirit token, and the remaining Glint Hawk, while a Viridian Corrupter the Spellskite.

Left with his Hero and a Memnite, Utter-Leyton dropped to 14. He cycled a Spellbomb and considered his play. Attacking with the Hero would get some damage though, but he'd lose it to the two blockers. Instead, he summoned a second Memnite and passed back the turn. On Iyanaga's upkeep, he Dispatched the Titan. Iyanaga instead cast a Primeval Titan, fetching an Inkmoth Nexus and a Kessig Wolf Run. He now had three Nexuses in play, and after activating two of them to go with the Sphere of Suns, was able to Galvanic Blast the Hero of Bladehold.

Utter-Leyton drew and summoned a Glint Hawk and passed it back. Iyanaga was on 7 life, but Utter-Leyton was hard pressed to find a way to deal that last third. His team was two Memnites, Glint Hawk, and a Myr token. He also had a Moorland Haunt with plenty of ammunition.

The Titan and the Solemn Simulacrum attacked, Iyanaga fetching out his last Nexus, and a second Kessig Wolf Run. The Glint Hawk blocked the Simulacrum, but Iyanaga sank a heap of mana into a Wolf Run, and showed Utter-Leyton a Galvanic Blast to finish him.

Utter-Leyton paid 2 life to cast a Vault Skirge and a Memnite on the first turn of Game 3, attacking for 2 on turn two, but only playing a Glacial Fortress and passing it back after that. Iyanaga took down the Skirge with the first half of an Ancient Grudge, but Utter-Leyton had a replacement. Good thing for Iyanaga: he had the second half of the Grudge, and only the Memnite made it through to the attack step, dropping Iyanaga to a practically healthy 16 life.

Iyanaga tapped out to summon a Solemn Simulacrum, allowing Utter-Leyton to fly over with an Inkmoth Nexus instead. Iyanaga wasted no time playing a sixth land and casting a Primeval Titan, fetching a second Inkmoth Nexus and a Kessig Wolf Run.

Utter-Leyton's board: Mox Opal, Glacial Fortress, Inkmoth Nexus, Memnite. No frowns, though. The man can keep his cool under pressure. 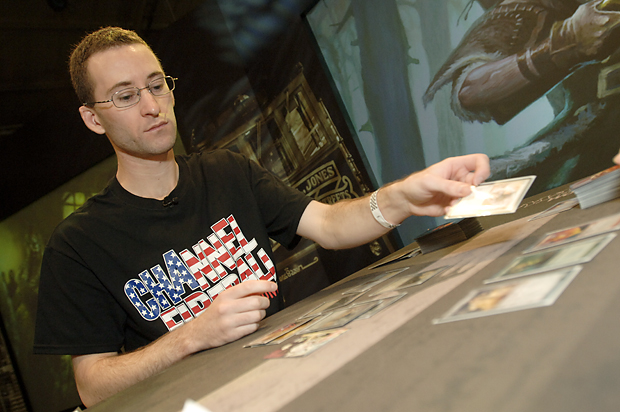 Iyanaga turned his Primeval Titan and Solemn Simulacrum sideways, and Utter-Leyton leaned over to count Iyanaga's lands. There were 11 of them, and they were quickly joined by two more, thanks to the Titan. The Glint Hawk blocked the Simulacrum, and the Titan dropped Utter-Leyton to 11. Iyanaga summoned a replacement Simulacrum, and passed the turn back with seven lands open: three of them Nexuses.

Utter-Leyton now down to Mox, Fortress, Nexus, and Memnite, drew and summoned an Etched Champion. Iyanaga counted the damage on the table and turned everything sideways. Utter-Leyton picked up his cards, and started shuffling.

As they waited to start Game 4 under the cameras, Iyanaga stepped away from the table for a break. I asked Utter-Leyton how his playtesting of this match (against Ben Stark) went last night.

"I was getting crushed. Any time he draws Ancient Grudge, I'm in trouble."

Utter-Leyton was not impressed with his opening seven cards, and shuffled them back in. While shuffling, he realized that Iyanaga had not yet decided on his opener.

"Thinking," Iyanaga replied instantly. What was his hand? One land and two Ancient Grudge, perhaps? As Iyanaga shuffled Utter-Leyton's deck, I naturally took a peek:

After much deliberation, Iyanaga kept it. 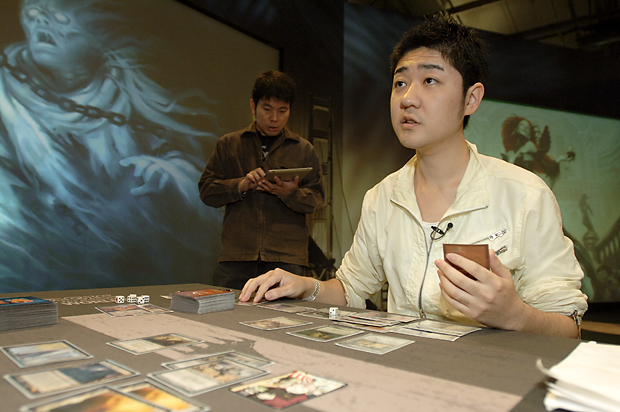 Utter-Leyton was less impressed with his six than he was his seven, and went back for five. His first spell of the game was a turn-two Spellskite.

Iyanaga, however, had found a Sphere of Suns for his second turn and a third land for his third, and he destroyed the Spellskite with Viridian Corrupter. Utter-Leyton was on the infect plan and attacked with an Inkmoth Nexus before playing a second one, completely unaware of what was waiting for him.

Iyanaga played a fourth land on turn four and summoned the Solemn Simulacrum. He would now have access to six mana once he could untap.

Utter-Leyton attacked with his Nexuses again. Iyanaga untapped, and summoned the first Inferno Titan. Utter-Leyton had a Dispatch for that Titan, but not for the second. After casting Tempered Steel, he was forced to chump-block the second Titan with one of his Nexuses. His only out now being a second Tempered Steel, to allow the last Nexus to infect Iyanaga for five poison counters. Utter-Leyton drew his card, threw down his hand, and offered Iyanaga the handshake and a smile.