Quarterfinal
On the Hunt

Brian Kibler, American pro and Hall of Famer, has torn through this event with the Wolf Run Ramp variant that players from team ChannelFireball brewed up. His opponent, Denniz Rachid from Sweden, is also playing a variant on a popular deck: Delver-Humans, combining the best of the Humans deck with Delver of Secrets.

Both players made minor small talk, but for the most part kept quiet as they shuffled up. Kibler was listening to his track of the tournament, Concrete Angel, once more before putting away his mp3 player, as the match got underway. 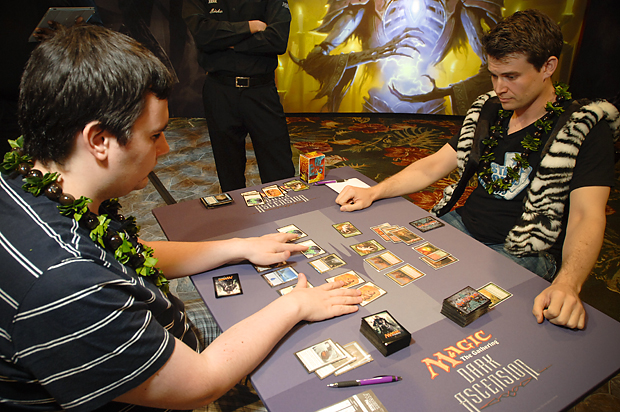 Denniz Rachid's Delver-Humans can create an imposing army, but Brian Kibler's Wolf Run Ramp can do the same thanks to Huntmaster of the Fells.

Rachid led off with a Gitaxian Probe, taking a peek at a hand that could accelerate out a turn three Huntmaster of the Fells or a Thrun, the Last Troll . The Swedish player followed that up with Gather the Townsfolk, while Kibler used Rampant Growth to get his deck going. 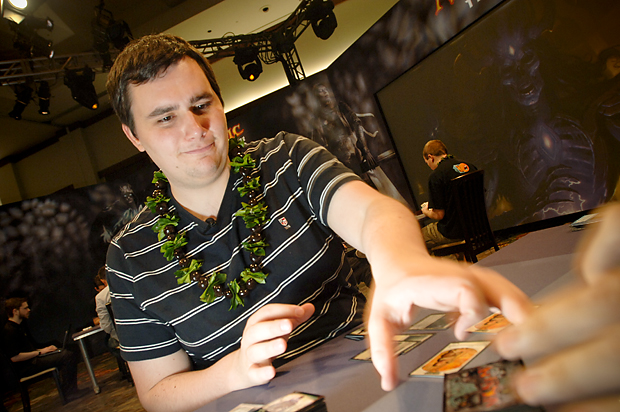 Denniz Rachid's Delver-Humans can create an imposing army, but Brian Kibler's Wolf Run Ramp can do the same thanks to Huntmaster of the Fells.

The human tokens got in for some damage as Kibler played out his turn three Huntmaster of the Fells. Rachid used Midnight Haunting to get some flying beaters into play at the end of Kibler's turn. Rachid's deck coughed up an Island on his fourth turn, letting him cast Geist of Saint Traft. Kibler, meanwhile, attacked with a wolf token and then added another Huntmaster of the Fells to his growing board.

Vapor Snag disposed of a wolf token, but an Inferno Titan from Kibler added more monsters to his army. A turn later, and Rachid scooped up his cards, staring down an army of wolves led by one massive titan. 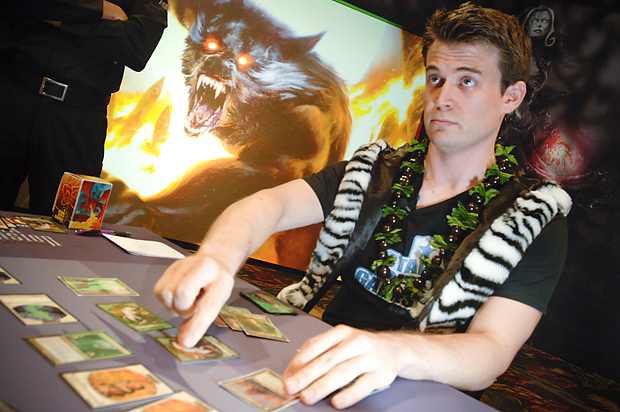 "I just kept tapping out," Kibler said with a smile, as the two players bantered about the quick game.

Both players wished each other good luck as they drew their opening hands, both players quickly keeping.

Rachid started off with a Gitaxian Probe, seeing the necessary ramp for some early Huntmaster of the Fells and Primeval Titan action. Ponder had Rachid see three unexciting cards, as he shuffled up for a different one. A Delver of Secrets came down for the Swedish player, while Kibler played his Sphere of the Suns, getting a die from the table judge to represent its charge counters.

Rachid drew, unable to transform his one-drop. He passed with three mana open after an attack, and after some thinking, decided to use Mana Leak for Kibler's second Sphere of the Suns. It was the right call, as Kibler did not have a third land drop.

A Geist of Saint Traft forced a Slagstorm from the mana-starved American player, as Rachid ran out Dungeon Geists to get a clock going while his opponent searched for lands. Kibler found a Rampant Growth, getting a land, but his next turn Huntmaster of the Fells was stopped by Mana Leak.

The Dungeon Geist proved to be a strong clock, as Snapcaster Mage for Mana Leak held off a second Huntmaster of the Fells. Kibler fell to 7 on attacks from Rachid's two creatures on the next turn. 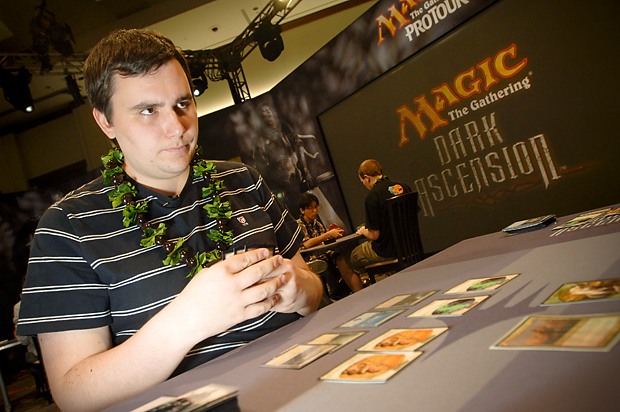 Rachid's goal? Slow down Kibler's mana, and get in for damage while he can.

Galvanic Blast from Kibler was stopped by Mental Misstep on the next turn, as Rachid's attacks pushed Kibler to 2 life. Inferno Titan on the next turn resolved, but a Vapor Snag cleared the way for Snapcaster Mage to wrap things up.

Rachid's turn one Gitaxian Probe let him see Kibler's hand again, including a Galvanic Blast in the waiting, which he forced from the American player with his turn one Delver of Secrets. Kibler, meanwhile, cast Rampant Growth for his second Forest, followed by Sphere of the Suns. Rachid's turn two Delver of Secrets transformed on the next turn, but he loset his creature to Kiber's turn four Inferno Titan.

The Swedish player had a Vapor Snag to get the Titan off the battlefield, but it was also his turn to be struggling for lands. Multiple turns went by with Kibler slowly poisoning Rachid with Inkmoth Nexus, under no pressure while Rachid's deck failed to cough up a third land. Gitaxian Probe into Ponder finally found Rachid his third land, prompting Kibler to play his Inferno Titan with mana up to pay for Mana Leak. Inferno Titan dropped Rachid to 12, and Inkmoth Nexus after that put Rachid up to four poison.

Snapcaster Mage for Vapor Snag staved off the Titan for one turn, but when Kibler recast the Titan, Rachid packed it in.

"I could use some more water," Kibler said. "I'd offer you mine, but I'm sick," Rachid said smiling, as he cleared his throat.

"Usual fashion," Rachid said, casting Gitaxian Probe before playing a land on his first turn. His turn one Delver of Secrets transformed on the second turn, revealing Negate and giving Rachid a speedy threat.

Kibler's Sphere of the Suns was halted by Rachid's Negate, as Delver of Secrets brought Kibler to 14. A second Sphere of the Suns resolved from the American player, while Rachid added Champion of the Parish to board after a third attack with his Insectile Aberration.

Kibler quickly answered the two creatures with Whipflare, using Autumn's Veil to stop Rachid's Mana Leak. Rachid reloaded with a second Delver of Secrets and Gather the Townsfolk, but Kibler fired back with Slagstorm, bringing the game to a halt.

Kibler, having stabilized his life, started to play threats. Thrun, the Last Troll and Huntmaster of the Fells let the Hall of Famer go on the offensive, and the Huntmaster transformed when Rachid's deck couldn't cough up any spells. Snapcaster Mage for Gather the Townsfolk at 2 life gave him an army of Humans, but it transformed Ravager of the Fells back. 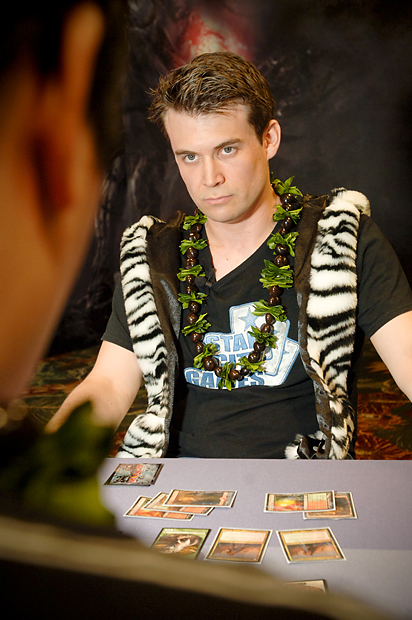 Kibler, on the hunt.

Rather than potentially allowing an instant to keep Huntmaster from transforming, Kibler simply aimed a Galvanic Blast at Rachid to claim the game and the match.

Brian Kibler wins 3-1 and advances to the semifinals!