Quarterfinal: "I Have the Nuts"

Sam Stein, Level 2 player from the USA, had piloted his Affinity deck through all obstacles, only to face one of his worst matchups in the Top 8. German Level 3 pro Andre Müller, his opponent, couldn't have been happier about his quarterfinal matchup. He cited Affinity as one of the best matchups for the Enduring Ideal deck he and a crew of Germans had developed together. While Müller had a full week of non-stop Extended testing under his belt, Stein had not been as fortunate, so he chose to stick with what he knew before coming to Valencia: "I couldn't test that much, and I knew Affinity pretty well." 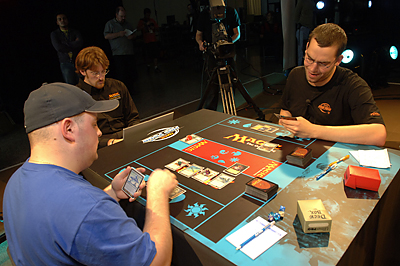 Sam Stein, running Affinity, faces a tough matchup against Andre Müller's Enduring Ideal. This season is ripe with fast games in the Top 8. After Jacob Van Lunen's and Chris Lachmann's superfast match in the finals of San Diego, Müller set out to break their record.

"I have the nuts," Andre commented when Sam Stein made Cranial Plating on his third turn to go with Ornithopter and Arcbound Worker. On turn four, Müller played Seething Song then Enduring Ideal, and Sam Stein packed up his cards. The whole game took about 30 seconds. Writing it down took longer than it took the players to play this record-fast game.

"It gets interesting after sideboarding," said Stein, who didn't seem to be fazed, really. He said that he had actually had a good draw, but: "That's all I can do in the first game, put you on a clock so you have to kill me." Müller agreed: "Now we can play real Magic."

Andre Müller had been psyched for this Pro Tour. He and the other Germans felt they had a really good grasp on the uncertain metagame of many various decks. "You play poker at all?" Andre asked, making conversation while resolving his mulligan. "Yeah, that was my occupation before this," Stein revealed.

Stein had the exact same opening, except that his artifact land was a Vault of Whispers instead of a Seat of the Synod this time. Müller suspended Lotus Bloom. Stein did not go aggressive, playing out only a Chromatic Star and not looking entirely happy. On the other hand, a poker player like him should be able to control is facial expressions and make a, well, Magic face. 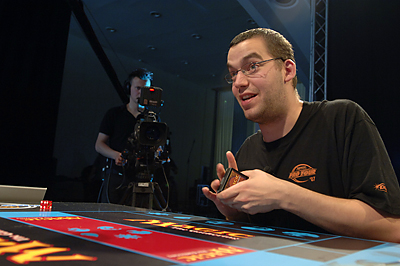 That IS Andre Müller's poker face.Seal of Primordium was the first obstacle Stein threw in Müller's way. The German was just stockpiling on sacrifical lands, going to 17. A second Seal of Primordium from Stein was supposed to make it difficult for Müller to keep his enchantments in play. But Müller, when he resolved his Ideal the turn after, just searched out Pernicious Deed and blew up the two Seals. Stein possibly should have blown the Lotus Bloom on the upkeep it came into play (at least if he knew Pernicious Deed was a danger), but it made no difference in the end.

"I don't know if I would rather play you or the Japanese blue-white deck," said Müller, who was out to prove his assertion that "Affinity is a good matchup for me."

Again, Stein decided to play. He was showing flustered cheeks, now under the pressure to win a game before being booted out of the Top 8 in an 0-3 blowout. "I mulligan,' said Müller. "I mulligan all the time."

Müller: "So, you play poker live or online?"

For the third time, Stein opened on Ornithopter and Arcbound Worker, but this time, Frogmite and Arcbound Ravager decided to join the party. "Oh, a better draw," commented Müller, who had suspended two Lotus Blooms on his first turn, and Sensei's Divining Top next. Stein was contemplating, figuring out what to name with Cabal Therapy. This time, Müller actually did keep a straight face, staring Stein down. The American named Solitary Confinement, prompting a "Wow!" from Andre Müller—that was the only business in his three-card hand.

Stein attacked with his team. "I'm all yours," said Müller, and Stein put many eggs in that cosy little basket called Arcbound Ravager, pumping it with Arcbound Worker, all three lands, and an Ornithopter and hitting Müller with a 7/7 Ravager and a 2/2 Frogmite. Müller went to 9 and checked his Top, only to find nothing. Applause from the hall washed through the door of the enclosed Top 8 area when Stein claimed his first game in the Top 8.

"I was 90 percent that you had the confinement," said Stein.

"I should really keep my mouth shut when playing against people as smart as you," Müller said. "You can only trashtalk people worse than you."

Even though he had just won a game, Stein didn't get his hopes up. "I've tested the matchup with a friend of mine who also ran Ideal, and it's not good." 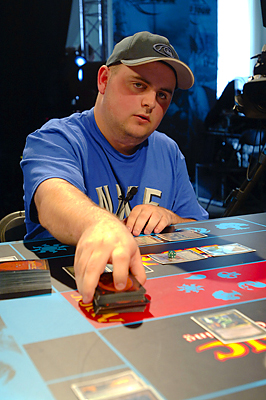 Sam Stein tries to hold on. Müller opened with two suspended Lotus Blooms, while Stein had the all too familiar Ornithopter and Arcbound Worker hand. Müller seemed confident that he would win this game, too, but Stein gave him just a small window, hitting for 9 damage with the help of Cranial Plating. "Next turn will probably be a kill turn. Three cards in hand, that could be anything," Müller speculated. His mana was plenty, but did he have a play? Judging by the amount of time that Müller took to decide on cracking his Lotus Bloom for

, he had a risky plan. Two Seething Songs and a Burning Wish later, Müller had Enduring Ideal for Pernicious Deed, with Pentad Prism and a sacrificial land to power it up.

Stein sunk into thought. Müller started his trademark pen-tricks again, showing confidence. When Stein simply attacked for 9 damage, Müller took that beating, going to 1 life. Stein had only "go" to say, and at the end of Stein's turn, Müller blew the Deed, leaving only Darksteel Citadel and Glimmervoid for Stein. When he sought out Dovescape, Stein struck out his hand for Müller to shake.

"Where's a Wizards official? I want my flight to New York! I just Level Four'd!" said a happy Andre Müller.

The two players discussed their match afterwards. It turned out that Stein had a Seal of Primordium in his hand in the last game, but both players figured that it wouldn't have made a difference. Andre Müller advances to the semifinals of Pro Tour–Valencia against Shuhei Nakamura!