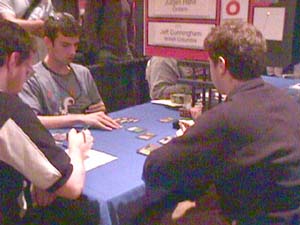 Jeff Cunningham has done nothing by play red and green spells all weekend – six rounds of "JSS red/green" on day one, and two red/green draft decks on day two.

Now his trademark color combination has its work cut out for it. Jurgen Hahn, a one-time Canadian National Team member, is playing a green/blue/red madness deck. Most players see the matchup as severely lopsided in the favor of Hahn, due to potential overwhelming card advantage and bigger creatures.

But Cunningham has been know to beat the odds before.

Hahn played first in Game 1, and kept a hand of three mountains, two islands, a Repulse and a Wild Mongrel. His deck certainly has the shakier mana base of the two, but he must have felt confident that he would draw a green source in the first few turns.

Cunningham put out a Wild Mongrel and a Yavimaya Barbarian in the first three turns and started attacking. Hahn, still without green, played Flametongue Kavu as his first spell, causing Cunningham to pitch two lands and a Firebolt to keep his Mongrel alive.

Cunningham pitched a Violent Eruption to his Mongrel on his next turn, killing the FTK and doing two to Hahn, then swung in for five more. Hahn, still without green, played his fifth land and a Merfolk Looter.

Cunningham had no way to kill the Looter, so he just attacked Hahn down to 7 and cast Call of the Herd. Hahn Repulsed the token and drew a second Fire/Ice. 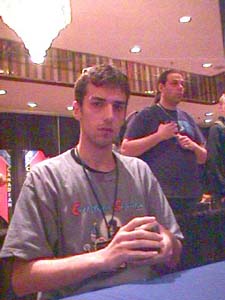 When Cunningham went to attack on the following turn, Hahn Iced the Mongrel and Fired the Barbarian, keeping his life total safe. Cunningham recast his Call, but Hahn Looted away a Circular Logic.

Hahn then finally drew a Forest, played it and passed the turn. Cunningham didn't want to lose his Mongrel, so he chose not to attack, and just Firebolted Hahn to 5 instead. Hahn looted out an Arrogant Wurm at the end of the turn.

Hahn then drew a second green source and cast a Mongrel and a Basking Rootwalla, then attacked with the Wurm. Cunningham had FTK ready for the Wurm, but the game was slipping away. Hahn Fiery Tempered Cunningham's Mongrel, Eruptioned away the FTK, and attacked for 6, leaving Cunningham at 8.

Cunningham cast Volcanic Hammer, but Hahn had another Logic. Game to Hahn.

If Cunningham can't win the game when his opponent is color-screwed and doesn't cast a spell until turn 4, this matchup is worse than I thought.

Game 2 was a sad affair. Cunningham kept a one-Karplusan hand, and the only spell he cast was a Firebolt on Jurgen's turn-1 Rootwalla. After four turns, Hahn had a Monrel and a Looter in play to Cunningham's lone land, and Cunningham scooped in disgust.

Hahn kept another hand with no green mana source in Game 3, and Cunningham made him pay. Rootwalla, Mongrel, Firebolt the Looter, Call, Call again. Hahn had a few answers, like Violent Eruption and Repulse, but he was casting them with Shivan Reef, giving up valuable life points.

The green mana never showed up, and Volcanic Hammer sealed it for Cunningham.

Chris Benafel, in the crowd for some unknown reason, gave Cunningham (an ex-Magic Colony housemate) some rowdy encouragement between games. Can Cunningham make the impossible comback?

Hahn's opening hand in Game 4 was non-aggressive: four land, Looter, Logic, Fire/Ice. But Cunningham had to mulligan and didn't look happy with the six-card grip either, but chose to keep it. 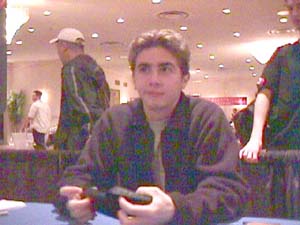 Hahn went first, and put out his Looter on turn two, forcing Cunningham to spend his second turn Firebolting it. Hahn had no turn-3 play, but had a Flametongue on turn 4 for Cunningham's Mongrel. Cunningham let it die, then Firebolted the FTK and played a Rootwalla on his next turn. Hahn Fired the Rootwalla, but then neither played out any creatures over the next few turns.

Cunningham launched a few Volcanic Hammers at Hahn, and Hahn sat there amassing defensive spells, like Repulse, Violent Erpution, and Circular Logic. Cunningham eventually drew a Call of the Herd, but it was instantly Repulsed.

Then Hahn started drawing the business. He put out an Arrogant Wurm, then a Mongrel, and then went for the throat by discarding Roar of the Wurm to the Mongrel and flashing it back. Cunningham had no way of dealing with any of it, shrugged, and scooped.

Hahn kept Cunningham off the Canadian team three years ago as well.