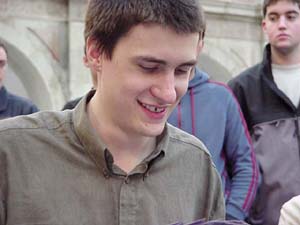 Jelger Wiegersma Both of these players have accomplished a lot in the past few years. Jelger Wiegersma is one of the many good Dutch players who just recently started doing well at Pro Tours and Grand Prix. Olivier Ruel, part of the dynamic brother duo, is a name well known to everyone following European Grand Prix coverage, finishing second in the last Grand Prix held in Portugal, bested only by his brother, Antoine.

Olivier won the die roll and, not surprisingly, chose to play first. Both players kept their hand and Olivier started the action with a turn 2 Meddling Mage naming Powder Keg. He followed that up with another Meddling Mage naming Oath of Druids putting Jelger under a lot of pressure as he has four power worth of attacking creatures shutting out Jelger's two best ways to handle them.

In the meanwhile, Jelger was drawing a lot of land and desperately needing answers, he Intuitioned for three Accumulated Knowledges, playing the one he got in Olivier´s upkeep, tapping out. Olivier cast Land Grant, showing Winter Orb, Foil and a couple of irrelevant cards. The Frenchman decided to go for the throat and cast Winter Orb, Foiling Jelger´s Force. Jelger then Thwarts reducing him to two lands and without a way to deal with the Meddling Mages and a 4/4 Werebear Jelger is forced to scoop

Ruel sideboarded 3 Interdict, 2 Wax/Wane and his last 2 Winter Orbs, bringing his Orb count up to 4, taking out his Looters, 1 Sleight of Hand, 1 Quirion Dryad and 1 Swords to Plowshares.

Jelger sideboarded 4 Propaganda, 3 Back to Basics and a second Weaver for 4 Fact or Fiction, 1 Spike Feeder, 1 Morphling, 1 Thwart and 1 Intuition.

Jelger decided to play and the game got underway with no mulligans on either side. Jelger was looking very happy as his opening hand contained not one but two Oath of Druids and a Powder Keg, all excellent cards against the Super Gro deck.

Jelger played the first spell of the game in Oath of Druids on turn 2. Ruel let it resolve without thinking because he was holding Wax/Wane, which he promptly cast next turn. Jelger followed up his first Oath with a second, which got Forced by Olivier. Olivier then played his first creature, a 1/1 Werebear.

Jelger played his last answer, the Powder Keg, and let out a relieved sigh as Olivier had no answers. Olivier then went on a must-get-threshold crusade but failed not drawing an extra cantrip from his Gush. He attacked for one life with his Werebear.

Jelger and Olivier then started trading damage, Jelger attacking with his treetop Village and Olivier with his giant 1/1 Werebear. Ruel desperately wanted to get to threshold at that point but was holding only two casting cost creatures and counters, both of which he could not cast because of the Powder Keg and the fact that Jelger´s not casting any spells. After three turns of attacking and saying 'go', Olivier decided it was time to do something and he Interdicted Jelger´s Treetop Village getting himself to threshold in the process. He then tried to resolve a Mystic Enforcer, which was countered, and a Winter Orb, which resolved, eliciting a Keg activation by Jelger. 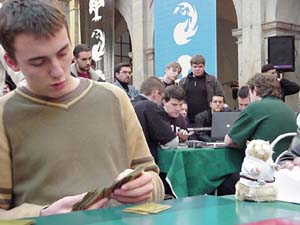 Olivier RuelJelger then played a new one and added a Spike Weaver to his Hill Giant strike force. At this point Jelger appeared to be in control as he had a Keg with two counters and a Spike Weaver and a Treetop Village attacking for six every turn. Olivier tried to get back in the game by casting some two casting cost creatures, including two Werebears stopping Jelger´s 3/3s. Still, Jelger appeared to be in a good position with his two-counter Keg about to blow up all of Ruel´s creatures. All of this crumbled to dust when Ruel Interdicted Jelger´s Keg and Jelger was suddenly forced to keep his Weaver and Treetop back on defense. Jelger played another Spike Weaver and turned the game into a staring contest as Olivier couldn't effectively attack because of the two Spikes and Jelger was unable to deal any damage through Ruel´s huge wall of creatures.

Wiegersma played a couple of Propaganda´s and finally a Back to Basics trying to lock Ruel out of ever attacking again. Ruel Waned the Back to Basics. Olivier, in the meanwhile, was playing a lot of Meddling Mages, which all resolved as Jelger was once again drawing a lot of land, shutting out Oath of Druids, Powder Keg and Morphling.

By that time, Olivier had a quite large Quirion Dryad and decided to start attacking, paying four a couple of times. Jelger Fogged to keep himself alive and two turns before his Weavers ran out, he played another Propaganda, followed by a Back to Basics. At this point Ruel could only attack once more as all his lands were in play and most of them were tapped. He needed to both Plow the Weaver and the Treetop and then attack with his 15/15 Quirion Dryad. Olivier then started a card drawing frenzy playing multiple Gushes, Brainstorms and Sleight of Hands trying to get his two remaining Plows and some counter magic to back it up. With five cards left in his deck he decided to go for it resolving both Plows and killing Jelger with everybody´s favorite 19/19 attacker.