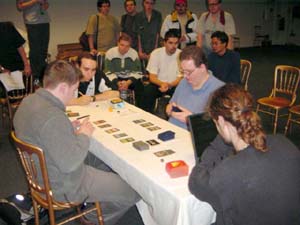 Both players entered this match still reeling from the crushing defeat their football side had taken the previous day. (Editor's note: this article was written by an Englishman).

Talking through this match earlier with Kai we soon realized that it was heavily in his favor in game 1 and I expect Kai to win game 2 as well, save a really fast creature draw from his opponent.

Kai won the toss and elected to play first, casting Harrow on his third turn, then Lay of the Land, giving him the full 'Domain' on turn 4. Facing Absorb mana from Rene, Kai passed his fourth turn and was spanked for 3 by a Lightning Angel. Still accelerating, the Pro Tour Player of the Year then Harrowed again and cast Worldly Counsel for 5 (super impulse).

Abusing his own card drawing, Kai then cast Allied Strategies for 5 and discarded a Pernicious Deed holding an Evasive Action, which he then used on a main phase Prophetic Bolt from his opponent.

The fast-playing Champion thought for quite some time (about 10 seconds) Kai then made 5 Ordered Migration tokens and again passed to Kraft leaving mana open to Worldly Counsel - from which he drew an Overgrown Estate! (This card would make it very hard for Rene to burn him out.) Once again Rene went for the Prophetic Bolt, and sure enough it hit because Kai was tapped out - but Budde then had free reign to cast his Legacy Weapon - which would spell disaster for any creature trying to block the migration tokens.

Considering all his options, Kraft decided to make his Goblin Trenches and took another 5 from the Migration tokens, but it was in vain as Kai had just way too many cards that could win from this point in his hand already: 2 Collective Restraint, Overgrown Estate and Allied Strategies - not to mention the others. When both a Restraint and an Estate hit the board uncountered Rene swept. 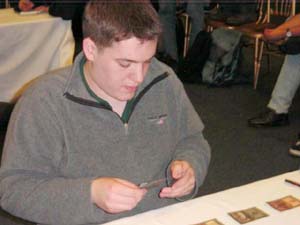 A second Allied Strategies then drew a third Absorb and then finally a couple of Goblins came into play.

Once again his opponent chose to Prophetic Bolt in his main phase which gave Kai all the breathing space he needed as his opponent was tapped out, but he still took 6 damage that turn from the Bolt and the Goblins. Allied Strategies number 4...Collective Restraint.

Once again Rene cast a Prophetic Bolt and Kai was reduced to 4 life. I took a peep at Rene's hand at this stage and it contained yet another Prophetic Bolt and an Urza's Rage, so Budde was really up against it. At this stage Kai was desperately searching through his deck for his one Overgrown Estate - yet again casting Worldly Counsel for 5, but to no avail. Sure enough, despite finding a Void that took the Rage, the 4th Prophetic Bolt found the head with Gainsay back-up.

Rene kept his sideboarding the same as the last game. 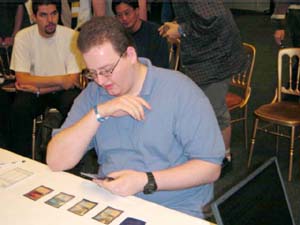 Interestingly, Kai chose to draw in this game claiming he hated to mulligan in such a situation. As luck would have it Rene in fact did have to mulligan his starting hand.

Kai then cast Addle on his third turn naming 'blue' and took a Lightning Angel that he was quite pleased about. Again playing instants in his own turn, his opponent replied by casting Fact or Fiction, taking an Angel and a land, discarding a Trenches and 2 lands.

With the option of casting a Lightning Angel, Rene declined and 'Raged' Kai at the end of his turn instead after a Pernicious Deed had been laid, hoping to draw the sixth land to back up his Lightning Angel. On his next turn the land was not drawn though and Kai was free to cast Evasive Action on the Angel. Relieved, Kai cast Allied Strategies for 4 and passed, taking a Prophetic Bolting in the next turn, but Addling the next one.

Then came the potential end of the world for Rene as Kai cast Lay of the Land to finish his 'Domain' and then tapped 7 mana to make a Legacy Weapon!

Knowing that he had to act fast, Kraft then Fact or Fictioned into Trenches, Rakavolver, Exclude (one pile) and Aura Blast, Mountain (other pile). He took the three-card pile, then laid a seventh land and made Goblin Trenches. Kai then drew off the top an Allied Strategies for 5 and drew into an Addle, OVERGROWN ESTATE, Evasive Action and Chromatic Sphere. His opponent then made a Rakavolver, which was almost removed from the game, but Repulsed, but then removed from the game again in response when Kai activated his Sphere.

Kai then cast Addle to take out an Absorb, then proceeded to take out some lands with his Weapon, Worldly Counsel for Evasive Actions and basically destroy Rene with ridiculous control cards, all the time holding back his Overgrown Estate until he could be sure it would not get Aura Blasted.

About five turns later Kraft had seven lands in play to Kai's 14, 1 card in hand to Kai's seven and there was also a Legacy Weapon, Pernicious Deed and Collective Restraint on the board...

When Budde's Goblin Trenches hit play the game was over.