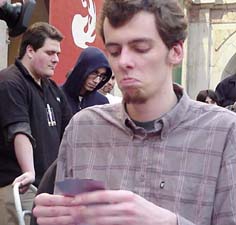 Tom van de LogtTwo World Champions that need no introduction faced off in this high caliber Top 8; the potency of which reflects well on the current Extended environment.

Tom, the reigning World Champion, had made a very brave deck choice in a "Maher Red" deck that had been fashioned to beat the non-basic-land field. No less than four Price of Progress in the main deck had managed to see him through the Swiss successfully, although there had been a number of good turns of fortune on the way. After each match it seemed, he would wander up to be and say "I top-decked Fireblast so I could achieve threshold and use my two Barbarian Rings the turn before I died." Of course his major cause for concern had been the red mirror: Prices vs. Scrolls is not a fun match-up, but even so he had managed a 'one-win, one-intentional draw' record against them.

Kai was playing a u/w/g Oath of Druids deck that splashed red for Pyroblasts in the sideboard. This deck was quite heavily metagamed against creatures as it contained the usual Feeder/Weaver/Morphling, four Oaths, four Swords to Plowshares and three Powder Kegs (the third of which was a last minute insertion to deal with the huge number of SuperGrow decks.) This deck did struggle slightly in the face of control decks such as the u/b/g deck or 'Walamies' and maybe even the Oath mirror, but even so five members of team Godzilla played it and all made Top 32.

One would imagine that game 1 should be nothing much short of a nightmare for the German Juggernaut, as the four main-deck Price of Progress were designed to wreck exactly that deck. After sideboarding, Kai's plan is to bring in four Call of the Herd, three Hydroblasts, and two Samite Ministrations, whilst Tom has access to four Scrolls, four Pyroblasts, one Chimeric Idol and maybe even his Pyrokinesis and Powder Kegs.

Tom won the toss. "Guess who is playing first", he said with a wide grin.

Land, Pup....Wasteland your land, second Jackal Pup. "This is clearly not good for me," remarked the German. One of the Pup's then was 'Swords' followed by a Force of Will on a Ball Lightning when the second land Kai could lay was a Treetop Village. Rallying slightly, Budde managed to cast a spike Feeder, but Tom had another Ball Lightning lying in wait which swung onto the table with his opponent tapped out with no more 'Will Power'. Tom then spent quite some time thinking before his attack phase which encouraged Kai to suggest passing the turn instead, but eventually only the Ball Lightning served. It was blocked, then the Feeder was sacrificed to gain life.

On thirteen life, Kai then managed to make an Oath of Druids, and took one last savaging from the Pup before a Fanatic was summoned to kill the Hound. With no creatures in play the Oath did not trigger and the burn war had begun. Tom was a little disappointed not to have drawn a Price of Progress, and Kai was able to cast both an Impulse and a Fact or Fiction without taking any damage, but the only card of significance it produced was a brainstorm.

In a surprise show of guts, Kai then swung for three with his Treetop Village twice figuring he had to win somehow, then cast a Spike Weaver. In the meantime van de Logt had still been drawing rubbish - land after land. After some thought he decided to activate his opponent's Oath, finding a Jackal Pup and, to Kai's delight, two Price of Progress were flipped over in the process.

In his next turn both the Treetop Village and the Weaver then swung across, but Tom Incinerated the Village then blocked it with his Pup when Kai moved a counter from the Weaver. To this Kai then used a second counter on his Weaver to cast 'Fog' for a turn, so the Treetop lived, laid a land, then Force of Willed a Price of Progress to go down to ten life.

In Tom's turn the Pup tried valiantly to get some damage in, but the last counter on the Weaver was used to 'Fog' and it sailed it's way to the graveyard. This left just a Pup in the ring, so once again Tom was faced with the choice of whether to kill his own creature or not. Shaking his head profusely, the Dutchman was forced to Firebolt his own creature (taking two damage), then pass the turn.

With two Counterspells and an Oath in hand Kai chose to swing with his Village once again. Tom drew another land.... Finally the current Worlds Champion managed to draw a powerful spell - his last Price of Progress, but Kai had only just achieved four blue mana and the ability to play both Counterspells in one turn. Hoping his opponent might have only one Counterspell, van de Logt Fireblasted the Treetop Village, then cast the Price, but Kai had 2, so they moved to game 2.

Sideboarding:
Kai sideboarded out four Oath, one Wasteland, one Forbid, one Force of Will, two Blessings and one Swords for four Call of the Herd, one Powder Keg, three Hydroblasts and two Samite Ministrations.

Tom elected to play first but Kai had to mulligan down to six. Van de Logt started by making a Cursed Scroll, Wastelanding Kai's first land, then making a Chimeric Idol. Budde replied with two Powder Kegs, then took a Ball Lightning/Idol hit. A Call of the Herd token then traded with the Idol, whilst Kai's Kegs rested on one and three counters, the second of which took out a Ball Lightning in the subsequent turn. 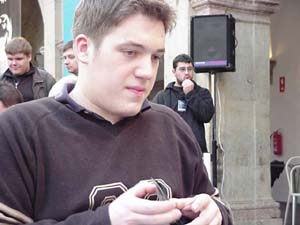 Kai Budde Budde was unable to find a fourth land to 'flashback' the Call of the Herd for a couple of turns, by which time it was too risky to tap out against the red mage. With three Fireblasts, a Scroll and a Pyroblast in hand Tom attempted to Scroll Kai naming Fireblast - it succeeded then a second Chimeric Idol started serving the beats, putting the German on 6six

Forced to cast a main phase Fact or Fiction to find land, Budde found one, but was on the back foot from this stage onwards. Tom had a hand containing three Fireblasts, a Pyroblast and a Price of Progress and managed to hit the Fireblasts three times in a row.

With Kai on 2 life Tom decided to unleash his hand: Fireblast - was 'Hydroblasted'; Fireblast - was 'Samite Ministrationed', but in response Tom cast the deadly Price of Progress to which Kai managed a final Hydro, but it was 'Pyroblasted' and the game was won.

Kai replaced an Impulse with the Wasteland he had previously sideboarded out, probably as a result of the low mana draw he had suffered in game 2, but possibly because he was playing first.

Obviously deciding to play first, the German machine cast Brainstorm having already laid a Flood Plains on his first turn. In the meantime Tom had managed a Firebolt and a Cursed Scroll. A fourth turn Ball Lightning was 'Counterspelled', with the Dutchman stalling at three lands, then a Chimeric Idol was attempted. Kai responded with a Fact or Fiction revealing: Call, Swords and Wasteland, Brainstorm, Tropical Island. Kai took the Call and the Swords, allowed the Idol to resolve, then cast the Call of the Herd in his own turn. This was subsequently 'Incinerated', then the Idol was removed from the game with a Swords. WHAM! Morphling. The Shapeshifter was thrown on the table with only one mana left untapped. Tom took full opportunity of the situation and cast Price of Progress: Budde had the Hydro, but Tom had the Pyro, so it resolved for twelve points of damage to the head for the German. As if this was not enough it was followed by a Fireblast and the chasm started to open for the control player.

"Come on, deck!" cried Kai. Sure enough, he ripped a Samite Ministration of the top and started serving with the Morphling and the Call of the Herd. Thinking he had won, Tom drew a Barbarian ring and immediately threw it at his opponent to finish him off, but the Ministration proved enough to stop it and with two Counterspells in hand the five time Pro Tour Champion squeezed his way to victory two turns later.