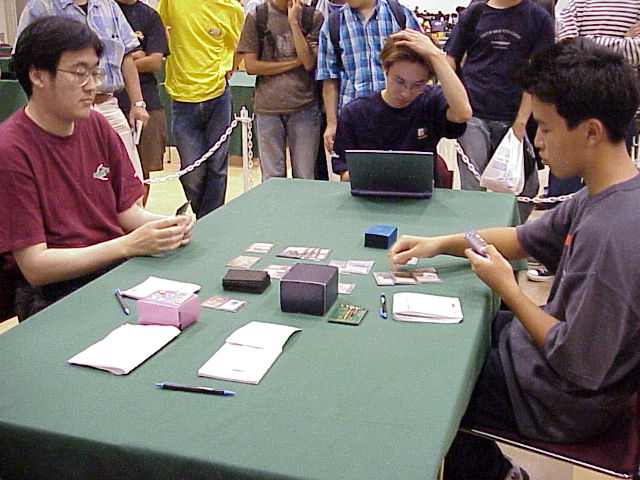 This quarterfinal promised to be one of the quickest. On one side was Kei Ikeda, a one-time Pro Tour player and his ultra-fast red-green deck, splashing blue for Ice and Prophetic Bolt. On the other was fifteen-year old Kenshiro Ito and his blue-green-white tempo deck. Both have access to plenty of early plays and ways around their opponents monsters.

Ito kicked off in game one, and was on the board fast with Gaea's Skyfolk. Ikeda matched him with a Blurred Mongoose. Ito tried to put him off his paces with a Temporal Spring on his forest, but Ikeda was happy to replay it and add a second Mongoose.

Ito held back on his Skyfolk, trading it for a Mongoose, and played Fact or Fiction. He was given the option of Questing Phelddagrif and island or Elfhame Palace, Coastal Tower and Repulse. Despite having no white sources on the board, he chose the smaller pile.

He played an Elfhame Palace from his hand, debunking his opponent's clever split. He also put down a Gaea's Skyfolk. This played right into Ikeda's hands, as his Flametongue Kavu joined the party. Ito played a Coastal Tower, and with just one white at his disposal, made an Angelic Shield, hoping to slow the game down.

Ikeda untapped and dropped Raging Kavu. The Shield bounced the Flametongue, but Ito still fell to five. He dropped to four on his turn playing out Questing Phelddagrif and a second Shield. Ikeda was not worried, holding two Rages and a Fire/Ice. Ito scooped before he could get burnt out.

Ikeda kept a slow hand for game two, just lands, Gainsays and Skizzik. Ito made him pay for it, busting him up with Galina's Knight and playing Angelic Shield as a preventative measure. When Ikeda failed to make a third-turn play, Ito added Mongoose to his team. Ikeda took his time, casting Thornscape Familiar on his fourth turn since his Flametongue was of no use. 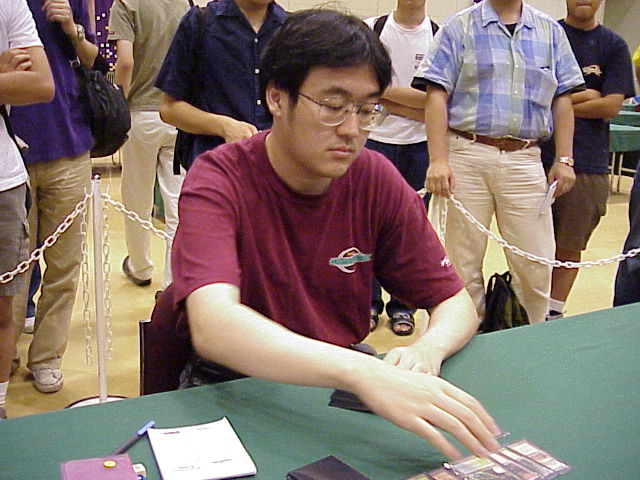 Ito sent his boys in. Ikeda refused to block. He dropped to twelve. Ito was clearly sitting on a counterspell, and Ikeda's hand was all high-cost spells. He took four more, then Iced a land in hopes of pushing past the countermagic. He untapped and kicked up a Skizzik. Surprisingly, he attacked with both his creatures. He Gainsaid a Repulse, but Angelic Shield sent the Skizzik home.

Ito's next attack reduced him to two. He made the only play available to him, recasting his Skizzik. Ito's Mystic Snake came down hard. Ikeda fanned through his hand twice before conceding the game.

He drew more land, and his Familiar and Raging Kavu smashed for five past Ito's Angelic Shield. Ito played a Gaea's Skyfolk and held back. Ikeda untapped and thought hard before playing Treva's Ruins and Ice on the Skyfolk, choosing not to take care of it with Prophetic Bolt. He swung with both creatures.

Ito bounced the Raging Kavu with Angelic Shield, falling to thirteen. Ikeda replayed it and ended his turn. Ito made a second Shield and passed the turn back. Ikeda swung with Ranging Kavu. Ito thought for a moment, then took it. He untapped and cast Blurred Mongoose. 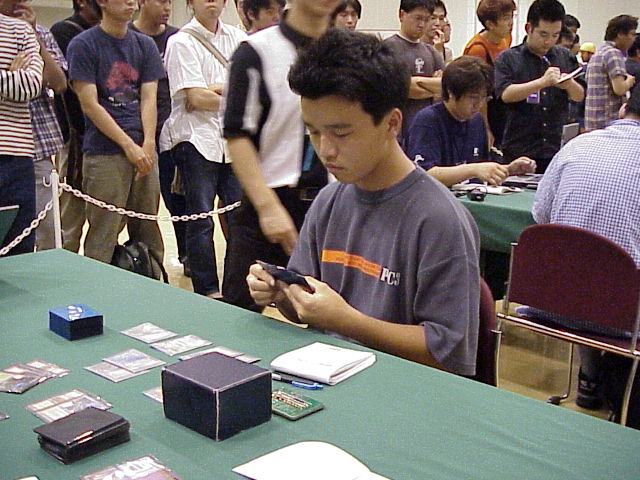 The crowd gasped as Ikeda drew a second Raging Kavu. He played it and attacked with his four creatures. The Mongoose traded with one of the Raging Kavus, and the Skyfolk took down a Familiar. Ito stood at five life. Ikeda upped the ante with a Mongoose of his own.

Ito drew his card slowly, frowning at the board. He eventually chose to pass the turn back. He sacrificed the Shield to bounce the Kavu outside of combat and played Mystic Snake when Ikeda tried to take advantage. This forced Ikeda to hold back.

Ikeda untapped. Faced with a board situation moving from bad to worse he threw caution to the wind, aiming a Prophetic Bolt at his opponent's head. Ito did not counter, falling to one. Ikeda dug into a Skizzik. The next turn, he tried the same trick again, this time with one mana up. Ito attempted to Repulse his Mystic Snake to replay it and stop the trouble. Ikeda double-checked his opponent's lands, and seeing that the were only seven, played Disrupt. This put an elegant stop to any of Ito's plans for the Snake, and secured the match win for Ikeda.