After topping the swiss section of the tournament Collins had the first choice of his seat and after much thought he decided to place himself into seat 5, forcing his opponent Johnston into seat 1. Any Rochester drafter will tell you that seat one is the single worst place to be in being at the total mercy of the last placed drafter, often your first pick can sit useless and unused in your sideboard.

Collins had ventured into the draft hoping that he would be drafting green and his wish came true as he picked up a 5th pick Stalking Tiger, the table sending a clear message to him that green wouldn't be contested from that side. Collins also began picking up late red picks like Blazing Salvo and combined them with some nice early picks on Chainflingers to create a fast red greendeck. A few questionable picks were made by Collins noteably two Leaf Dancers over a Nut Collector and a Chainflinger which obviously would have been better suited to the matchup.

After the draft Collins chance of taking this one out weren't looking too good. Johnston had drafted the near perfect counter to Collins deck but magic is a strange game and its not always the favourite that walks away the winner. Collins won the die roll and elected to make Johnston play first. Coming out fast and furious Johnston cast a turn 2 Mystic Visionary backed up with a turn 3 Hallowed Healer. When Collins had no turn 2 play Johnston whined "Oh comeon don't make me be the only one with a turn two play" but at the end of Johnstons third turn Collins tapped two mana and cast a Flame Burst, stating "There's my turn two play". 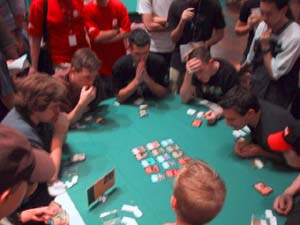 This set the tone for the rest of the match as the two joked between themselves and with the crowd. Johnston dropped a Dreamwinder on turn 4 which Collins responded to with a Chainflinger, one of the best ways for him to dominate the matchup. After attacking for three turns uncontested the Visionary was chainflung and Johnston decided to play a Phantom Whelp, turning his deck into the more aggressive one. Unfortunately for Johnston this was the last real spell he cast as he continued to draw more land while Collins drew into a Dwarven Lunatic and a Stone Tongued Basilisk. Johnston could find nothing that would deal with these creatures and they went all the way taking Collins up 1-0 in the high priced ante match.

With his back against the wall Johnston chose to play first, and once again dropped the first spell with a turn 3 Cephalid Looter and a turn 4 Aven Fisher soon followed. Collins dropped a turn 3 Dwarven Lunatic and backed up with a turn 4 Chainflinger which was perfect to take down the Looter that was netting Johnston savage card advantage. Johnston kept busting out creatures with a Nomad Decoy and a Phantom Whelp which he used to try and stabalise the ground. To put an end to the Fisher Collins decided that it would be best to sacrifice his Lunatic, and pinged off the looter with his Chainflinger before it could do anymore damage.

Collins tried to mass an army but the nomad kept the newly cast Sprining Tiger at bay while buying Johnston more time to gather his defences. A Cloudchaser Eagle from Johnston helped to slowly edge the life totals back into his favour. A turning point in the match came when Collins cast a Childhood Horror and blocked the Cloudchaser Eagle, sacrificing his land believing that he would achieve threshold but he miscounted his graveyard ending in the loss of his Childhood Horror for two points of mana burn and an Embolden from Johnstons graveyard. With the board locked down, Johnston drew into his Aven Flock and Resilient Wanderer and ended the game by attacking with his flyers and giving his Wanderer protection from green.

In the deciding game Collins once again forced Johnston to play first and Johnston thought long and hard about his opening hand. It contained two islands one Seafloor Debris and four white spells and his gamble to keep it paid off when he drew a plains on his third turn. In this game it was Collins who cast the first spell with a second turn Werebear to which Johnston responded with a third turn Pilgrim of Justice. Upping the ante with a Springing Tiger Collins once again saw his board locked down due to a Luminous Guardian. Collins sent his Tiger into the red zone and Johnston decided that his best play would be to block, knowing that the chances were Collins would have a trick to finish off what was left of his Guardian.

When Collins Thermal Blasted it Johnston didn't looked at all worried and dropped a Mystic Zealot, a Nomad Decoy and another Mystic Zealot over his next three turns. With the ground totally locked down Collins cast another Springing Tiger and the two passed the turns back and forth for the next 8 turns, with Collins discarding 4 forests during his end step. Johnston was the first player to break the deadlock with an Aven Fisher and this move sprung Collins into action. He attempted to cast an Nantuko Disciple only to have it Syncopated, but a turn later he managed to get a Rabid Elephant into play. Again Johnston was unphased as he once again tapped down Collins creatures in his endstep, drew and then sacrificed his Seafloor Debris to cast a Ghastly Demise on it and a Kirtar's Desire on one of the tigers.

The tide of the match was turning heavily towards Johnston as his graveyard was getting stacked full of cards, and he threatened to activate threshold at any time by sacrificing his Abandoned Outpost to power up his Nomad Decoy. Collins tried in vain to launch an attack into the Zealots but as predicted Johnston sacrificed his outpost, tapped down 2 creatures and hit threshold, finishing off Collins with his massive flying army.