Quarterfinal: Living Off the Land

Japan's Makihito Mihara and Italy's Giulio Barra both knew what they were there for. The games began without preamble. 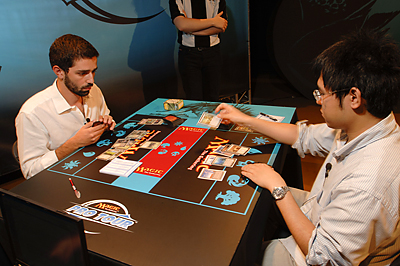 Giulio Barra and Makihito Mihara clash in the Quarterfinals.As both players began by building their mana with a Sakura-Tribe Elder and Azorius Signet respectively, the first real play of the game was made with on the third turn when Barra threw down a Cabal Therapy naming "Condescend" and forced Mihara to reveal his hand: Repeal, Remand, Thirst for Knowledge, Chalice of the Void, and a lone Condescend that was lost to the graveyard.

Now equipped with the knowledge of what he was facing, Barra played out a Pernicious Deed that Mihara chose not to counter, instead playing his Thirst for Knowledge. On his turn Mihara played Academy Ruins and passed the turn over to his opponent, but it was becoming obvious that the World Champion had a problem—while he had several lands in play his only source of coloured mana of any kind was from his Azorius Signet so he was unable to play more than one spell each turn.

It was also clear that Barra had chosen to exploit this weakness. He forced the Remand out of Mihara's hand with a Loxodon Hierarch, and the Petrified Field that was Mihara's next land did nothing to help him out for mana. Barra again targeted the mana base of his opponent by choosing to blow up his Pernicious Deed for two and taking out the Azorius Signet, desperate to keep his only source of blue mana Mihara returned it to his hand with a Repeal, but that still left him out of colored mana that turn and unable to stop Barra from playing his Loxodon Hierarch. On the next turn Mihara played a Chalice of the Void and put three counters on it, thereby shutting off any further Deeds, but he still had to deal with the Hierarch that was squatting angrily across the table from him.

Barra switched into an aggressive mode—his Treetop Village attacked alongside the Hierarch dropping Mihara to 13 life. Mihara's lands continued to stifle his options, and he had to play two Azorius Signets in order to get the

for his Wrath of God. That stretch to play out his artifacts tapped him out once more and he was impotent when Giulio Barra played a second Hierarch to replace the first, but Mihara barely paused in playing a second Wrath of God to clear the board again. Turning to his un-Wrathable Treetop Village for offense, Barra was into the red zone again and dropped Mihara to 10 life, then added to the threat from his own lands by playing a second Treetop Village.

Wraths would be no defense for Mihara now, he needed something else and was desperate for answers—playing a Thirst for Knowledge that he knew would be countered by his own Chalice of the Void but responding to the triggered ability with his own Remand just to try and draw extra cards. On his next turn Barra ramped up both his Treetop Villages and sent them straight over to his opponent and a quick turn later the game was over. It was a game that had been dominated by lands—first Mihara had drawn all his lands that produced only colorless mana, then Barra's pair of Treetop Villages had taken his opponent from 13 to 0 life in almost no time all.

Hallowed Fountain from Mihara suggested that he wouldn't be caught in the same way as he had in the first game, while for Barra it was a case of not changing a plan that had worked perfectly as he opened with a Treetop Village and followed it up on the second turn with an expensive Kobold—or Tarmogoyf, as we like to call him—while Mihara built his mana base further with an Urza's Power Plant and Urza's Tower, and his beloved Azorius Signet.

Barra attempted to Duress Mihara at the beginning of his third turn, and Mihara could only Thirst for Knowledge in response, choosing to discard TWO Wrath of Gods. This seemed a bizarre choice of discards, but as the world champ revealed his hand it was clear why he had done so as it left the Duress with no legal targets; his hand contained several lands and the two big creatures Sundering Titan and Exalted Angel. Makihito Mihara planned to brawl his way through Game 2!

The Tarmogoyf swelled and reduced Mihara to 18, but when Mihara used his turn to play the morphed Exalted Angel it seemed as though Barra was facing a fight that he hadn't expected. But the Italian pro showed that he would not be so easily defeated in this Pro Tour—a Cabal Therapy took away the Sundering Titan then a Pernicious Deed was cast and sacrificed for zero to remove the morphed Angel. In the space of two turns Mihara had lost two Wrath of God, a Sundering Titan, and an Exalted Angel, and as the Tarmogoyf swelled to a 5/6 and attacked it seemed the Japanese legend was left clutching at nothing but a handful of land and a last shred of hope. 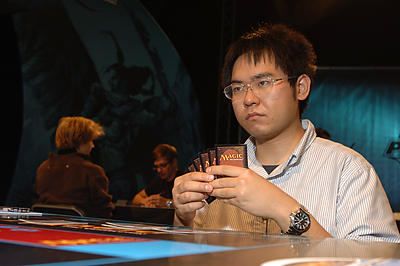 Mihara holds on as the game swings back and forth…But in a game that had already swung both ways there were even more twists to come. Mihara's library gifted him with an Exalted Angel that he was able to play unmorphed. At 4/5 she was too small to fight the Tarmogoyf directly, but with Lifelink she would be able to race the dreaded 'Goyf quite comfortably. Barra attacked again with the Tarmogoyf then played an Eternal Witness that allowed him to pick up his Pernicious Deed for later use, and on Mihara's next turn things got even worse for the Italian as Mihara drew an Academy Ruins—the Sundering Titan was threatening to return to the fight and Mihara had exactly the seven mana he needed!

Barra attacked as quickly as he could, activating his Treetop Village and sending all three creatures into the red zone for 10 points, dropping Mihara to just 2. But then came the critical play, as he targeted Mihara's Azorius Signet with a Krosan Grip, leaving Mihara unable to play his Sundering Titan the next turn if he chose to find it among the Academy Ruins. As he passed the turn back to the beleaguered World Champion, Barra suddenly beat his fists in frustration, obviously spotting an error he had made, but in truth it was already academic. Mihara played a Gifts Ungiven to search through his library on his turn, but finding no answers to the problem of fighting off so many creatures with so little mana he conceded the game.

As the two players shuffled up their decks for the third game it was clear that Giulio Barra was still angry with himself for his mistake. "I deserved to lose this one," he told his opponent, explaining what error he had made: "I should have waited until after he had put the Sundering Titan on his library before I played the Krosan Grip.... It gave him a chance to draw something. Luckily it didn't matter."

It was Last Chance Sunday for Makihito Mihara now, and he opened with an Urza's Tower, while on his first turn Giulio Barra showed he had no intention of letting his opponent back into the match with a Duress, revealing Mihara's hand of Azorius Signet, Urzas Power Plant, Gifts Ungiven, Thirst for Knowledge, and a pair of Chalice of the Voids. Barra carried on hammering Mihara's mana base for a third consecutive game and took the Azorius Signet. Mihara played his first Chalice with a single counter on it, shutting out any further Duresses and Cabal Therapies, but without that Signet had found himself again without any colored mana. Barra's dreaded Treetop Village slotted into place on turn two, but then on his third turn he showed his true intentions: a Vindicate put paid to Mihara's Power Plant, and a turn later a second Vindicate annihilated the Urza's Tower. Mihara was suddenly down to only a single Ghost Quarter in play, and when Giulio Barra played an Eternal Witness to pick up one of the lethal Vindicates it seemed that he would be able to finish the job completely.

On his turn Mihara laid a Hallowed fountain untapped, finally giving himself the mana he would need to play a Remand and defend his rapidly dwindling supply of lands. As Barra held back the Vindicate Mihara followed up a second Hallowed Fountain but the Italian wasn't finished with the comprehensive wrecking job he was doing on his opponent's deck and used a Krosan Grip to destroy the Chalice and open the way for him to play another Duress. Mihara was besieged by disruption and could only cast a Thirst for Knowledge in response to the Duress before handing over his cards, and lost his Crucible Of Worlds to be left holding Chalice, two Gifts Ungiven, a Condescend, Thirst for Knowledge and Tolaria West. The Thirst had tapped Mihara out yet again, and Barra's Vindicate erased the Ghost Quarter. 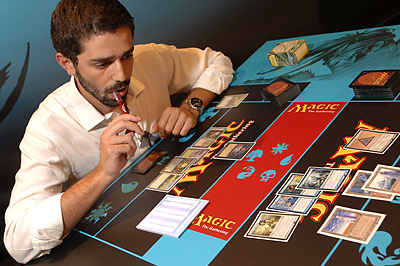 …but Barra knows to hit him where it hurts.Mihara finally got his mana working with an Azorius Signet, but with the Ghost Quarter gone Barra was able to bring his Treetop Village to bear and he thrust the land and the Eternal Witness into the red zone for 5, reducing Mihara to 7. With a second Treetop Village lined up and ready to go, it would only take drawing a sixth land for Barra to be able to win on his next turn.

Mihara now found found himself in a familiar position: low on life, low on mana, low on time, and facing threats in the shape of Treetop Villages that he couldn't easily clear away with a Wrath of God. His two Gifts in hand were unlikely to help him in time, and he was forced to use his Tolaria West to Transmute for a Ghost Quarter, then Condescend his own zero-cost Chalice of the Void to try and scry into anything that would be useful.

Meanwhile Giulio Barra had found a third Vindicate and aimed it at the Ghost Quarter, then attacked with his Eternal Witness to knock Mihara down to 5 life. In his main phase, Mihara again went to Gifts Ungiven for a solution, offering Barra a choice of Ghost Quarter, Wrath of God, Exalted Angel and Decree of Justice, and Barra handed him the Angel and Decree Unperturbed, the World Champion made his last desperate bid for survival by dropping his fourth Ghost Quarter from his hand. That would save him from one Treetop Village, and potentially buy him a turn to play the Angel or Decree... but it was immaterial. The top card of Barra's library was the sixth land he needed, the second Treetop Village swung into action, and Makihito Mihara was knocked out of the Top-8 of Pro Tour Valencia!

For three games Giulio had spent every available opportunity attacking the Urzatron's fragile mana base, and he reaped great rewards. With plays that were not completely obvious such as using a Pernicious Deed or Duress to remove an Azorius Signet when there were plenty of "better" alternative targets, Barra had demonstrated the awareness of his opponent's weak spots that had earned him a well-deserved place in the Semifinals of the Pro Tour.