you had tried to figure the odds before this weekend that three American players would be in the Top 8 of Pro Tour-Los Angeles and the only name you might know would be Star Wars Kid, you might have guessed say… a million to one. Three dollars and fifty cents at those odds would have brought you Dave Williams-style money, as that's exactly what happened. 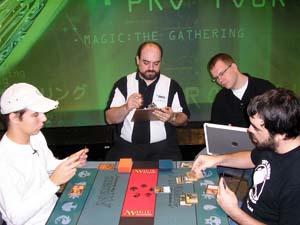 Tormos, left, and Moreno carried the Constructed flag for the U.S.

Three Americans in a Constructed Top 8 is a solid showing, but you'd expect at least one name like Gadiel Szleifer or Osyp Lebedowicz or Antonino De Rosa to be present and accounted for. What you would not expect to see are names like Ervin Tormos and William Moreno, but that's exactly what we have here.

Moreno is a 24-year-old in transition from Austin, Texas to New York City this week in order to "be a better boyfriend." On Saturday, Mike Flores was excited that there was another pro player coming to NYC. Sadly, Brian David-Marshall was saddled with delivering the news to Mike that he had been traded to Texas for Moreno and an Austin Knight to be named later, and Moreno's impending arrival would not benefit Master Flores in any way. Back to the story at hand, this is Moreno's third Pro Tour and his first trip to the Top 8 spotlight.

Facing Moreno is Ervin Tormos, yet another CMU unknown who finds himself in a Pro Tour Top 8. Tormos arrived at this Pro Tour without a real deck to play, and didn't know what he'd be running until the plane flight out here when teammate Benjamin Peebles-Mundy told him he should just run the Red-white Jank deck Mundy had designed. His deck now in hand, Tormos made Day Two and then had to win an awesome six matches in a row to grab one of the last Top 8 slots.

Moreno won the roll, choosing to play first while Tormos had the first spell of the match in Grim Lavamancer. Moreno ripped his Darkblast off the top of his deck to deal with the little wizard and then cast Careful Study, drawing a card with his first one and dredging back the Blast with the second. A repeat performance from the Blast on turn three killed Hearth Kami and another body hit the floor on Tormos's turn as Lava Dart fried Moreno's fresh fish in the form of Merfolk Looter.

Moreno cast Psychatog on his turn, which looked somewhat intimidating since there were already ten or so cards in Moreno's graveyard. Genju of the Spires for Tormos got in there, but Moreno decided to block the spirit rock, pumping it enough to keep the Tog alive and put Tormos down a land. Lava Dart sacrificing the Mountain made Moreno discard his final card (the aforementioned Dark Blast) but there was now an active Tog on the table and Moreno had access to an almost unlimited supply of answers to the Genju.

The game stalled heavily in the following turns with both players plucking a glut of lands from their libraries. Tormos shipped a Violent Eruption at Moreno's head to drop him to 12 and then a fetchland dropped him to 11 while the Psychatog plinked away at Tormos's life in return, trying to lure him into range for one final chomp. Frostling for Tormos and Aquamoeba added additional threats to the board, further complicated by a second spirit fanatic a turn later. But as you might have guessed by now, Darkblast is really good against creatures with only one toughness.

Moreno made a huge mistake a turn later where he attacked with an Aquamoeba that already had a ping from Frostling that Moreno Blasted during his upkeep. Tormos blocked with Blinkmoth Nexus, and fearing a pump, Moreno discarded a card to the 'Moeba, watching helplessly as Tormos pointed out it was now dead. Whoops.

Dr. Teeth was then forced to play defense for a while as Moreno waited for other animals to do his dirty work. Arrogant Wurm and Wild Mongrel finally showed up someplace other than Moreno's graveyard and it looked like Moreno wouldn't pay for his mistake, but Tormos had built up just enough burn to allow him to Eruption, then Lava Dart with flashback plus two Barbarian Rings for the win. 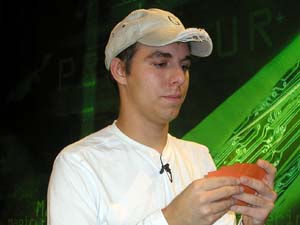 Tormos got his deck on the flight to the PT and piloted it all the way to Sunday.

Out for Tormos: 2 Frostling 3 Genju of the Spires
In: 2 Fledgling Dragon, 3

"God, swinging with that Aquamoeba was awful," noted Moreno. Billy's play has been questionable at times this tournament, as there were two separate occasions where coverage reporters witnessed Moreno cast Circular Logic with zero cards in his graveyard.

Tormos took a few moments while Moreno was shuffling to regale us with tales of Pokémon cards, but the jovial stream of chatter quieted briefly when Wild Mongrel hit the table on turn two for Moreno. Tormos had a decent start himself with Hearth Kami and Frostling, but Arrogant Wurm during the Mongrel's attack was the exact opposite of what he wanted to see. Both players went on the aggressive and Tormos Pillaged an Overgrown Tomb from Moreno, trying to set back his mana development. Moreno was unfazed, laying another fetchland on the board and then casting Aquamoeba.

"You have two cards?" asked Tormos. Moreno flashed him three instead. "Three? That makes me much less happy. Are they powerful? On a scale of one to ten, how good are they?"

"What's a ten?" asked Moreno. "These are probably sevens."

"Ornithopter should be considered a ten," noted Tormos.

"Definitely 7s then," was Moreno's response.

Moreno's next attack dropped Tormos to 5, with Moreno at a safe 13. Violent Eruption cleared away everything but the Arrogant Wurm, but Centaur Garden plus threshold made sure Tormos didn't live another turn.

"I wasn't sure if you'd figure out if I'd sideboard in Smothers for this matchup," noted Moreno.

Tormos had to take mulligans in triplicate for Game 3, complaining, "Man, I don't even know what my nut draw looks like with four cards. I'm not dejected at all, I'm definitely winning this game."

Tormos cast a turn-one Grim Lavamancer off the top, while flashing his two s and a Violent Eruption in my direction. Moreno didn't have a turn-two play, and Tormos was ecstatic to get in there with the Lavamancer. Dr. Teeth on turn three made certain that wouldn't be happening again. Tormos literally ripped three lands in a row to bring his FTKs online, squashing an Arrogant Wurm with the first.

Moreno just had too much gas there though and killed him on the next swing with the 'Tog and Basking Rootwalla.

"I need it. Most definitely. Lands and spells in this hand? This is unreal! Keeping," said Tormos.

Moreno also kept his hand and once again they were off. Tormos played a turn-two that was immediately Smothered. Wild Mongrel died to Lightning Helix and Tormos went to work on Moreno's lands, crushing two with Pillages, but Moreno simply drew more. Hardcast Wonder merely gave a target and the game suddenly got interesting. Aquamoeba died trying to trade to with the Kavu and Careful Study gave Moreno a madness outlet to get his Arrogant Wurm on the board.

Firebolt plus flashback dispatched that dangerous beater and the body count for Moreno began to reach critical mass. Tormos was never low on cards or threats for the game and left Moreno a flaming crisp in his chair, evening the match at two a piece. 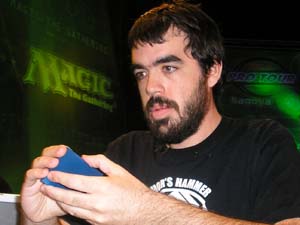 Moreno was blistered in Game 4, but came back strong in Game 5.

Tormos thought long and hard about his hand of three lands, two Frostlings, Lava Dart, and before choosing to keep. Moreno cast a first-turn Basking Rootwalla matched by a Frostling from Tormos. Aquamoeba hit the board on turn two for Moreno, avoiding the feared Mongrel draw for Tormos, while Ervin plucked more gas, as a Fledgling Dragon appeared in his hand as well. Turn three contained no action from either player.

Blocking Frostlings plus a Lava Dart cleared the board, and Tormos again went to work on Moreno's mana base, Pillaging an Overgrown Tomb only to see it reborn via Life From the Loam. Gifts Ungiven during Moreno's upkeep put three lands and a Darkblast on the board for Tormos to choose from. It became clear at this point that Moreno's hand was so filled with goodies that he felt the only way he could lose was via mana screw.

"You're trying to trick me," noted Tormos.

Darkblast killed a freshly attacking Hearth Kami on Tormos's attack, so the CMUer went back to work on Moreno's mana, again Pillaging a land. In truth, Tormos was simply making sure his Fledgling was going to hit play as a 5/5, provided it resolved.

"I've got a ready for next turn," warned Tormos.

Moreno's response was a typically droll, "In response to Flametongue, I'll even promise to put a creature in play."

Tormos chose to go large instead, throwing his dragon on the board, to which Moreno simply said, "Okay."

Shockingly, Moreno simply passed on the next turn as well, leaving him with six lands and nothing else facing a dragon. This is where it gets good though, as during Tormos's attack, Moreno used Cephalid Coliseum to madness out Basking Rootwalla and Arrogant Wurm while pitching Wonder to his graveyard.

Tormos was ready for this though and had played everyone's favorite Goblin Soldier prior to combat, allowing him to prevent two damage from the Wurm to his Dragon and keeping it out of Darkblast range. The next turn once again left Moreno with nothing on the board and Fledgling smashed for 9, stealing a yak from a farm and burning a few homes on the way out.

Moreno's hopes were now down to one last turn - he either needed to find a creature that could survive to block or die. Wild Mongrel was a good dog and gave him exactly what daddy needed. Tormos tried to cast Flametongue for the dog, but Circular Logic shot down that plan and Moreno let out a sigh of relief when he realized he had stabilized, but at 6 life one still had to ask, for how long?

Another Flametongue from Tormos met another Logic from Moreno, with Cephalid Coliseum once again providing card advantage and madness outlet. Wild Mongrel got busy on the next turn, bashing Tormos to 12, and when the grin of the most sinister atog in existence hit the board, it was now Tormos who was under the gun.

Firebolt was flashed back by Tormos on his turn to drop Moreno to four, but an end-of-turn Arrogant Wurm plus Darkblast for a would-be blocking Blinkmoth Nexus ended Tormos's thoughts of a comeback.

Billy Moreno's trek to New York City was taking a side trip into the semifinals.