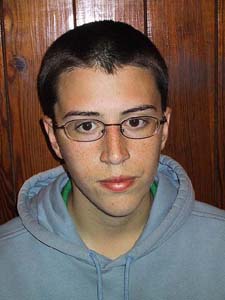 It’s the quarterfinals of the European Championships 2002. Roland Bode, from Germany, is facing off against Italian, Marco Lombardi. Both these players have fought through fourteen rounds of gruelling Swiss and just look relieved to have made it this far. Marco wins the coin toss and unsurprisingly, elects to play.

Roland’s playing the ever popular Red/Green Beatdown deck that saw so much success recently in the Canadian Nationals. His opening hand is a keeper, busting out a Grim Lavamancer, which he backs up with a Blurred Mongoose. Marco lays some Coastal Towers and looks dormant. He wakes up and the Wrath of God descends and annihilates Goland’s swarm. A Fiery Temper to the head drops Marco to 14 and the lone Yavimaya Barbarian angers God again.

Marco finally finds a red mana source whilst Roland just keeps laying dudes; another Barbarian is cast to avenge its predecessor. Marco’s end of turn Fact or Fiction is strong. The piles are Prophetic Bolt, Prophetic Bolt, land versus Counterspell and Goblin Trenches, Marco takes the smaller pile netting himself his win condition. Roland sends another Temper to the dome bring Marco to 7, who calmly replies by making his Trenches.

Roland’s Barbarian just continues to swing but Marco has finally got some defence options available to him. Sure enough, two Goblin Soldier tokens are created and then gleefully spring in front of the Barbarian, everything dies. Roland Firebolts to the head and passes the turn.

Roland has an active Barbarian Ring and a Firebolt in the graveyard and stares desperately at Marco’s life total before glancing at the growing hoard of Goblins that take him to 13. An upkeep Fiery Temper is countered but Roland follows through with a Flametongue Kavu which is Memory Lapsed. The Goblins continue to eat away at Roland, taking him to a lowly 9. Marco only has four land left thanks to his Trenches, but Roland is wary because of the burn that Marco’s deck packs.

Roland looks despondent as he stares at the Flametongue Kavu in his hand and the Forest that he just drew. He passes the turn and Marco makes two more Goblins and takes Roland to a mere 3 life. Roland untaps and draws before giving up and heading to game two.

After a lengthy shuffling period, both players are eager to continue playing. Roland gets to go first, a crucial advantage for his very aggressive deck. Marco looks to have boarded in two Circle of Protection: Green and a Wrath of God, he leaves all four Flametongues in the sideboard, fearing that Roland will keep his in.

Fearless of the three Wrath of Gods that Marco is now playing, Roland plays and attacks with a Wild Mongrel, a madnessed Basking Rootwala and a Barbarian. God’s Wrath descends, clearing the board and leaving Marco at 10, an end of turn Violent Erution drops him to 6.

Roland makes a Grim Lavamancer, which gets Fired. Roland responds with a Fiery Temper, leaving Marco in Urza’s Rage range. Sure enough, Roland has the Rage and they move on to game 3. 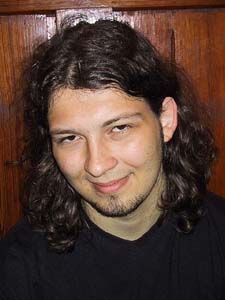 Roland puts the Lavamancers back in, switching them with three Basking Rootwallas.

Predictably, Marco goes first, but it’s Roland that really gets the game underway with a Grim Lavamancer. Marco Time Walks his opponent with an upkeep Ice. Roland untaps again and makes a Blurred Mongoose. Marco does nothing but drop land.

A Wild Mongrel is Absorbed putting Marco to 17 but a Lavamancer gets through. Marco casts and end of turn Fact revealing Rage, Repulse versus three land, which Marco takes. Roland makes a third wizard but Marco trumps it with a CoP: Green. An Urza’s Rage to the face and an attack lowers Marco to 7 but Roland’s Barbarian Ring does not look threatening with all the Lavamancers in play.

Roland’s second attempt at a Wild Mongrel is again Absorbed, leaving Marco at 6 after combat. Marco’s CàP: Green is looking pretty poor as the only Green creature in play is a Blurred Mongoose. Another attack and a Lavamancer shot drops Marco to a very humble 3.

Marco casts Fact or Fiction. The piles are split Repulse, Repulse, Land versus Trenches, Memory Lapse. Marco takes the Repulses, hoping to stall into a Wrath of God, which is about the only thing that can save him now.

Roland’s only Red mana sources are a Barbarian Ring and a Karplusan Forest, which have taken him to 15, but it isn’t going to matter because there is little Marco can do. He desperately Repulses a Lavamancer but he still hasn’t found the Wrath of God he has been digging for. Another end of turn Fact or Fiction leaves Marco tapped out and a Violent Eruption ends the game.

The between-game shuffling period just keeps extending as both players randomise their decks to the extreme. The decks are presented and the shuffling continues. It was almost as thrilling as watching paint dry. The game gets under way with neither player mulliganning once again.

A first turn Firebolt is all that happens for the first few turns, as Roland’s lands feel Icy. Blurred Mongoose leaps incontestably into play, though Marco doesn’t seem to mind, casting a Fact or Fiction. The piles are insane with Rage, Wrath of God, Land vs. Fact, Fact. Marco takes the larger pile, gets on the receiving end of a Fiery Temper, untaps and makes a Trenches.

Two Goblins are summoned when the Blurred Mongoose attacks but a Violent Eruption sweeps them aside. A few turns later, a Fiery Temper is Absorbed, elevating Marco to 9.

Roland’s hand is all burn and two Urza’s Rages leave Marco on 6 after he casts Healing Salve (ok, so it was an Absorb). Roland makes a Yavimaya Barbarian, which looks very weak against a Goblin Trenches and eight land; it is quickly joined by a comrade and they enter the red zone and trade with four newly made Goblins. Roland just lays a third Barbarian and passes. The game seems to be slipping away from him, but he’s holding a Violent Eruption and has an active Barbarian Ring, and with Marco on 6, everything’s possible.

Marco finally takes the offensive and attacks with two Goblins, Roland is now at 11 after all of the pain he took in the early game. A Blurred Mongoose tries to hold four Goblins at bay but fails. Roland’s nerves waiver and he finally casts his Violent Eruption which gets Syncopated and the Goblin army knocks him to 7.

Roland flashbacks the Firebolt he opened the game with, putting Marco on 4 but it is not enough as he falls to the pack of ravenous Goblins.

They’re taking it to the wire but neither of them looks at all affected by nerves, exchanging light-hearted, witty banter during the again lengthy between-game interval. The atmosphere is very relaxed and Roland chooses plays first.

Roland’s opening hand is not as strong as he would have wanted, containing two land and a Mongrel as his only creature. The Mongrel resolves but he misses his third and fourth land drops. All he could do was attack with the Mongrel and madness two Fiery Tempers, one of which gets Syncopated.

Marco looks in complete control, reaching seven mana before Roland makes his third! The Mongrel is Repulsed and then gets Countered, another is Absorbed and a Trenches lets Marco nail the coffin lid shut. A close match, spoilt a little by its anti-climax.