Do these two players really need any introduction? Ever since Royce Chai finished in the Top 16 of the 1999 World Championships, he's always been accepted as one of the best that Singapore has to offer, proving that more recently with a Top 8 finish at GP- Sydney and the 2001 APAC Championships. Albertus Law is a more recent star, having finished Top 16 at Pro Tour- Tokyo, and then being the third APAC player to break a Pro Tour Top 8 at Pro Tour- Barcelona. Since then, much of the Sideboard spotlight has been shining down on him. This is Law's second Top 8 finish in three Grand Prixes. The only time he has not made Top 8, he instead finished 11th place. Not too shabby, eh? 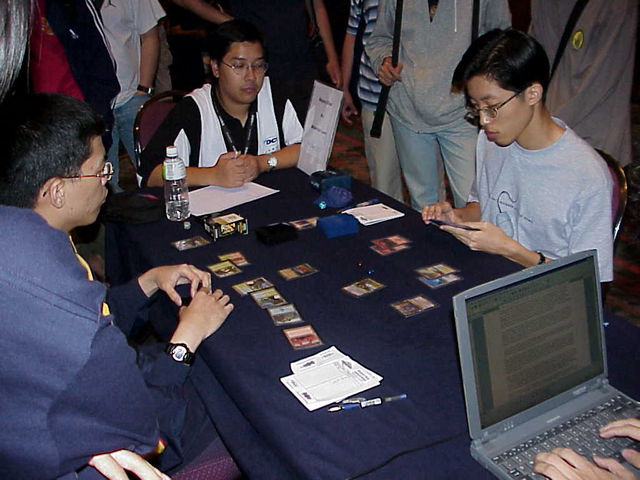 Law is playing his version of the Counter-Trench deck that first jumped on the tournament scene with Ben Seck's Top 8 finish at the Worlds PTQs, and has since then earned Itaru Ishida the championship prize in the largest Grand Prix event ever held. One notable addition in Law's deck is the inclusion of one maindeck Obliterate. Chai is using his rather unorthodox variant on David Price's 'Monkey, May I?' deck, using no Excludes and four Lay of the Land. Such an alteration cannot be terribly wrong, as shown by Royce's perfect 7-0 finish by the end of Day 1.

Chai won the die roll, and chose to go first. His opening hand lacked the necessary two-drops which define the format, instead being heavy on land. Law similarly opened another land-heavy hand, but he had the Trenches to go along with it. Both players refused the mulligan.

Displaying one of the various skills required to get here, Chai peeled a Blurred Mongoose off the top of his deck. Law played out his Trenches on his third turn, before Mystic Snake could come online. In the meantime, Chai's 'Goose managed to steal away four life points. When Law untapped and was able to create tokens, Chai continued to test Law's patience, and sent in the Mongoose while Law was still light on land. Creating tokens would reduce him to just two untapped lands, and while he does have Evasive Action in his deck, it is unlikely to help much in this situation. Law took two points of damage before recruiting some soldiers on Chai's end step.

Now the goose stayed home for fear of some goblin beatings. This situation was beginning to move towards Law's favor. With his Trenches locking down just about every single ground pounder Chai has in his deck (expect maybe a kicked Kavu Titan), the game plan now revolved around working Gaea's Skyfolk to their limits.

An upkeep Prophetic Bolt gave Chai the option of Urza's Rage, Kavu Titan, Blurred Mongoose and Shivan Oasis. Looking at the Trenches in play, he chose the Urza's Rage. Law continued to develop his mana, although he chose not attack with one of his two tokens.

Chai drew, and paused to think. His hand now held a pair of Urza's Rages. Another upkeep Prophetic Bolt reduced Law to just 5 life. Law was in trouble, and he was beginning to sense it, despite the fact that he knows that Chai has just three Urza's Rages in his deck. Bluffing an Absorb, he refused to budge, and passed his turn. In similar fashion, Chai didn't move a muscle, like a lion waiting for the right moment to pounce on its prey. When Law cast an end step Fact or Fiction, the moment was right, and Chai double Raged Law for the win. 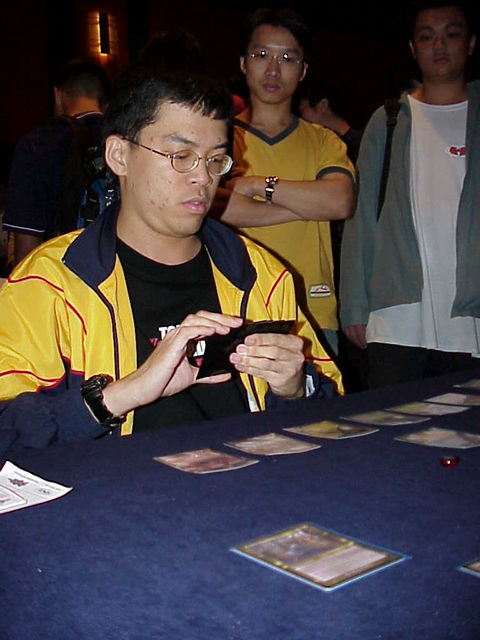 Both players instintively reached for their sideboards in preparation for the second game. Law brought in four Gainsays, four Meddling Mages and one Rakavolver, replacing a Goblin Trenches, the Obliterate, a plains and three copies each of Prophetic Bolt and Evasive Action. Chai brought in his four Gainsays, two Tranquilities, and his sideboard Urza's Rage, taking out three Fact or Fiction, a Mystic Snake, a Kavu Titan, a Dodecapod and a Repulse.

Law played first, and opened up with no early plays, despite the fact that he had used half of his transformational sideboard. Chai attempted a turn 2 Gaea's Skyfolk, but Law held a Gainsay at the ready. After that, it seemed as though Chai simply ran out of steam, without nothing to show on his third turn. When Chai Iced Law's Island, he drew Disrupt, and his draw step gave him Mystic Snake. It almost seemed as though Royce was now trying to assume the role of the control deck, although in the mind of Mike Flores, that would be suicide.

A second Ice gave him a Gaea's Skyfolk, which he played, knowing that he had the Disrupt to back it up against Law's three mana. Law didn't bite, and let it hit play, only to Fire it at the end of Chai's turn. Note that Chai still held two Mystic Snakes and a Disrupt in hand, so he could easily force through any sizeable threat. On the other side of the table, Law still hadn't seen an Absorb all match.

Neither player wanted to start anything too hastily, so both players engaged in a game that was very familiar to those back in 1998- Draw-Go. Things heateed up with a seventh turn Fact or Fiction from Law, which Chai spent one of his Mystic Snakes on. Law chose not to retaliate, mostly because he couldn't, but his stone-face expression revealed nothing to Chai. With Chai at three mana, Law went for Goblin Trenches, which Chai had to allow. Chai topdecked a Tranquility and cast it, knowing that he'd have the Mystic Snake in reserve. Law made four tokens in response.

Law tried to use Urza's Rage to eliminate the obstructing Snake, while Chai held no Repulse to save it. The four soldeir trooped down into the red zone, while Chai played a second snake to kill off one token. With the Snake out of Chai's hand, Law played a Meddling Mage, with the dial set to "Mystic Snake".

After Chai played a Blurred Mongoose, Law took a gamble and Repulsed the Snake back. Chai Disrupted, Law paid. Chai Disrupted yet again, and the Snake went back home. Three Goblin-Soldier tokens came marching in. Two died to Fire/Ice, and the last one hit home. Law's gambit didn't quite pay off. Now he'd lost his creature advantage and had given Chai an extra counterspell in the meantime. At least he still had the Meddling Mage to stop it's return...or so he thought.

When Law drew a second Goblin Trenches, Chai Urza's Raged out the Meddling Mage. Now the Mystic Snake was free to return, but Law had a Gainsay, just in case. The Trenches entered play and made Chai's Mongoose look very lonely. However, another threat lurked on the horizon. One Lay of the Land and two land drops later, Chai was now approaching the magical mark of 12 land. Although he did not have an Urza's Rage in hand, it would be in Law's best interest to swarm Chai out before he drew one.

The Goblins came out marching two-by-two, which forced Chai to play a Mystic Snake again to block out of desperation. One Snake does have difficulty taking down six goblins, and Chai now stood at five life, facing five tokens. A desperate Repulse granted Chai even more land, and he conceded the second game. 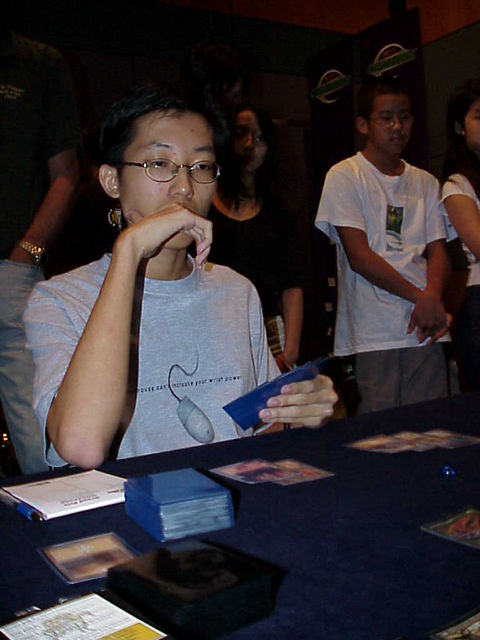 For the final game, both players knew about the several hundred dollar ante match that they were playing, and neither wanted to be the first to mess up. This resulted in minor tweaking of their decks for the deciding game. With the knowledge of Law's Meddling Mages, Chai brought in a Flametongue Kavu from the sideboard and reclaimed his Kavu Titan, taking out his two Tranquilities which he sided in for game 2. Law brought in a single copy of Breath of Darigaaz, taking out an Urza's Rage.

Chai chose to play first, and immediately kept his hand. Law wasn't as fortunate, and was forced to take a mulligan. His next hand gave him Coastal Tower and a Mountain as his lands, which doesn't exactly go with the Meddling Mage that was in there as well. Chai came out fast with a turn 2 Blurred Mongoose, while Law topdecked the required island to cast the Meddling Mage, naming Tranquility. He missed by a mile - both of Chai's Tranquilities were in his sideboard. Regardless, Chai really felt like his Mongoose needed to attack, and cleared the way with an Urza's Rage for the Meddling Mage. Law being the incredible lucky guy that he is, topdecked a replacement but still named Tranquility. In the meantime, Chai's Mongoose farm increased by one.

It was all in preparation for Law's next play: Goblin Trenches. Now, the Blurred Mongooses looked very dumb, and Chai was probably wondering what went wrong. Still, he ignored the goose's protests, and sent them in. One land took both of them out, and Chai played out a third Blurred Mongoose. Chai's lack of both lands and blue mana began to really hurt him. He only had three lands in play: a Keldon Necropolis, a Shivan Oasis and a Forest. Holding two Mystic Snakes in his hand, Chai was still short of two blue mana to cast them. In a friendly gesture to maintain parity, Law sacrificed some of his own land to even things out, with a few...er...side effects.

A second Meddling Mage entered play to lock out Chai's Lay of the Lands, to further increase Chai's predicament. The look on his face clearly showed that one too happy about holding eight blue cards- three of which were Mystic Snakes. He decided to ditch one to the graveyard. When the Blurred Mongoose attacked, Chai was shown the error of his ways, as Goblins, Soldiers and Wizards came through to attack for much, much more damage. When Chai's next draw step still revealed no land, he extended his hand in congratulations, and to Law's apologies.

3 Disrupt 4 Lay of the Land