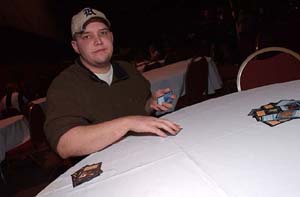 Draft has gone very poorly for Neil Reeves. Although he made all the right choices (Zvi Mowshowitz actually felt he was the only player not to make mistakes during the draft), Reeves simply got screwed by the packs. Very few good cards came his way, leaving Reeves scrambling to fill out his deck with cards like Fledgling Imp. To make things worse, Eric Froehlich stole a Shadowmage Infiltrator from under his nose. Reeves was a definite underdog in the matchup and would need a tremendous amount of luck to pull this one out.

Meraghni on the other hand is well set to do well in this draft. His red-green deck features bombs such as Kamahl, Pit Fighter and Savage Firecat. He ended up splashing blue, but adding the third color would hardly hurt his deck, thanks to Mossfire Valley and a pair of Ravaged Highlands.

"That's horrid. I'll keep." Neil Reeves' bad luck was compounded by the fact that he was forced to take a mulligan in the second game and keep a two-land draw that featured no black mana. The deck did not punish him too much more, as he drew a Swamp in time to summon a third turn Dusk Imp. Meanwhile, Farid busted out with Werebear and Nantuko Elder. Despite missing a third land drop, he had access to five mana. However, he was missing a Mountain and thus could not take advantage of the super mana draw.

Meraghni summoned a Nantuko Disciple, but his board was not looking very good against Puppeteer and Fledgling Imp that joined Dusk Imp on the board. Down to 14 life points, Meraghni finally drew a Mountain. He stabilized the board by removing the flyer with Firebolt and summoning Nantuko Mentor. Although Reeves was still at twenty life points, his opponent's board was promising a world of pain for him in the near future.

Stuck at three mana, Reeves cast Think Tank. Meraghni's turn was just a tad better - he summoned a Minotaur Explorer and cast Elephant Ambush main phase, to avoid any possibility of a Syncopate. Reeves, struggling to stall the inevitable cast Patriarch's Desire to remove Nantuko Disciple. Meraghni followed an eye for an eye theory, recasting a Firebolt out of the graveyard to remove Puppeteer, then attacking for six points of damage.

On his next turn, Meraghni attacked with all of his creatures. Reeves, who was tapped out after using an Afflict to remove Nantuko Mentor, blocked with his only creature. It was not nearly enough, as Meraghni cast Rites of Initiation pitching the other three cards in his hand to deal seventeen points of damage to his opponent.

It was Meraghni's turn to mulligan. He kept a one-land hand, hoping to draw a Forest and cast a turn two Werebear, but ended up missing a land drop. Reeves' draw allowed him to take full advantage of the French player's misfortune. He cast a turn three Think Tank followed by a turn four Dirty Wererat - a nice little combo. Repel and then Patriarch's Desire on the Werebear kept Meraghni manahosed longer. Aven Windreader and Dreamwinder joined Reeves' team. Meraghni drew into his lands reasonably well, getting up to four mana, but he was way too late to stop his opponent.

"Yeah manascrew, pump the fist!" commented Reeves, who maintained a fun attitude and was enjoying himself under the spotlight, win or lose.

It seems that the two players made a pact to take turns mulliganing. It was Reeves' turn and he went down to a decent six card hand. Meraghni kept a monster hand that would allow him to summon a turn four Savage Firecat. 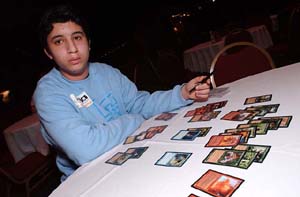 Reeves forestalled the monster by using an Afflict to kill off Werebear. He also destroyed a Spellbane Centaur with Patriarch's Desire. It was looking good for a few seconds, until Meraghni summoned a turn five monster. Dematerialize bought Reeves a turn, but Firecat was back a turn later. Although the situation looked very grim, Reeves did have an excellent answer - he cast Puppeteer, which meant the Savage Firecat would only be able to attack once, unless the French player had a Firebolt in hand. After that, Meraghni would be forced to make the Firecat smaller and eventually let it die, to cast out more creatures.

Down to eight life after the attack, Reeves stabilized by casting a Dusk Imp. He tapped Firecat inside Meraghni's attack step and went down to seven life points after an attack by Nantuko Mentor. He then summoned Kamahl, Pit Fighter, certain doom looming over Reeves.

Neil top-decked an Afflict, taking out the Pit Fighter. Kamahl went, but it took Puppeteer with it. Reeves' draw was pretty lucky - he drew Morgue Theft off the Afflict and was able to cast it and resummon Puppeteer tapping out in the process. It seemed like he managed to get ahead in this game, having dealt with both of his opponent's most fearsome bombs. However, it was Meraghni's turn to impress the crowd. He summoned a Krosan Avenger, cast Reckless Charge and used the Mentor's ability to make it 12/4, then attack for the win.

Meraghni broke the vicious cycle by not mulliganing in this game. His draw however, was less than impressive. He summoned an Ember Beast but played no other creatures, while Reeves cast a Dusk Imp and then a Dreamwinder. At the end of Reeves' turn, Meraghni cast Elephant Ambush, and then attacked with both creatures on his turn. He used Muscle Burst to let the 3/3 token survive combat against Dreamwinder, but summoned no other creature. Reeves, who once again managed to draw and cast an early Think Tank, was cycling through his deck to find answers. Dematerialize allowed him to take out the token, but his triumph was short lived. Meraghni summoned Kamahl, and swung for ten!

"Set us up a money-draft," Reeves shouted to one of his friends in the crowd. "I'll be done in a few minutes."

Repel forestalled the end of the match, but it was over a few minutes later, as Kamahl came out to play again.