Worlds has traditionally been a good tournament for Great Britain. Nick Lovett made the Top 4 in Paris, and Jonathan Randle in 2010 in Chiba. This year, it is Richard Bland who has stepped up, having come straight off a second place finish at Grand Prix San Diego to make Top 8 here in San Francisco. When Bland landed in California, he had 20 pro points. He has now locked up level 7, and is pushing for level 8 status.

When it comes to pro points, Luis Scott-Vargas is sitting pretty. For him though, in his home-town event, there is the potential to do something even bigger. With his family cheering him on, he could secure the title of Player of the Year. Currently Owen Turtenwald leads the race, but in the Top 8 there are three Channel Fireball team members who could beat him to the title. Luis Scott-Vargas is the best placed of them, virtually securing things if he could escape the quarterfinals. 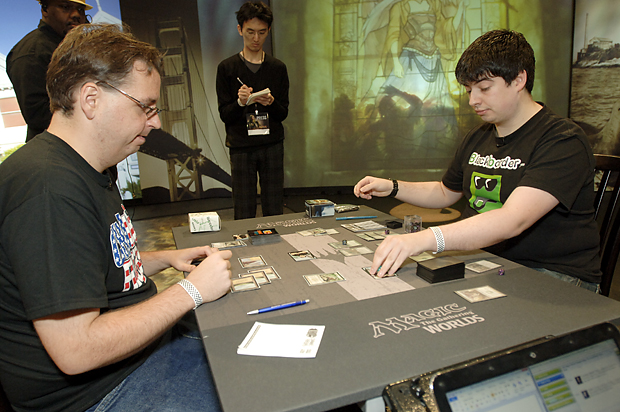 Luis Scott-Vargas, the home-town hero, goes up against Richard Bland, the man from Great Britain who has been on fire these past two weeks.

On the play, thanks to his finish in the Swiss, Scott-Vargas started with an Origin Spellbomb, while Bland had Avacyn's Pilgrim into Blade Splicer. The Myr token came out fast, and a Tempered Steel soon followed. While Bland had a Hero of Bladehold, it was not able to hold down the fort, as Scott-Vargas was ready with the Dispatch.

An Oblivion Ring from Bland got rid of Tempered Steel, and allowed Bland to get stuck in. He had a Mortarpod for Vault Skirge , and built up his board with Birds of Paradise, which would be able to go large thanks to Gavony Township.

Out: 4Origin Spellbomb and 4 Glint Hawk

In: 2 Hero of Bladehold, 1 Oblivion Ring, 2 Dismember, and 3 Spellskite

Scott-Vargas started the second game with a Vault Skirge on turn-one, happy to pay the life to get the flying creature out faster. He did the same on the second turn, and when he tried to cast Mox Opal, Bland had a Gut Shot in response to kill off one of the Skirges and keep from their being any extra mana for Scott-Vargas.

Behind on life slightly, it was time for a Timely Reinforcements from Bland. Scott-Vargas was low on mana, while Bland was hitting every land drop. He had a Hero of Bladehold to further advance his board, which seemed superior to the Glint Hawk Idol and Memnite that Scott-Vargas could muster. Another Gut Shot came from Bland to take out Vault Skirge, and while Scott-Vargas did have a Dismember to stop Hero of Bladehold from attacking, he seemed on the back foot.

Scott-Vargas traded a Memnite for a 1/1 token from Bland's side of the board, and calmly used a Dispatch to take out a second Hero of Bladehold.

Bland had an Oblivion Ring for a Glint Hawk Idol, and a Gavony Township to make his two Soldier tokens a little scarier. The life totals after Scott-Vargas's attacks were 7 to 6 in Scott-Vargas's favor. He had to use a third Dispatch to stay alive, and looked a little rattled to see a third Hero of Bladehold from Bland. He had the perfect answer in the race though, using a Tempered Steel at just the right moment to pump his team for enough to close out the game.

Richard Bland would have his first experience of being on the play in the match. He also had his first mulligan though, while Scott-Vargas kept his opener.

A Birds of Paradise powered out a turn-two Blade Splicer for Bland, who by the second turn was facing down a pair of Memnites, a pair of Vault Skirges, and a Signal Pest from Scott-Vargas. 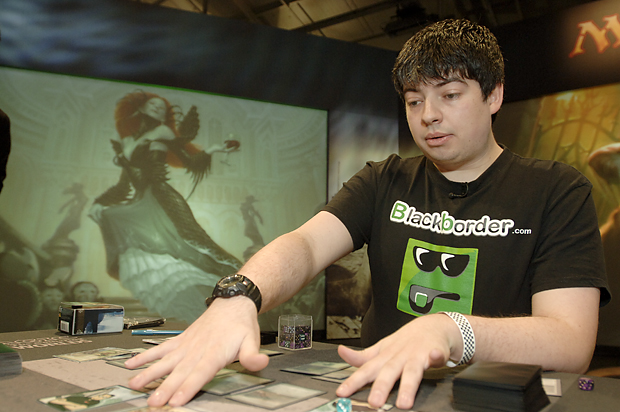 Bland's deck is very good at making a lot of stuff. However, so is his opponent's deck.

Bland had the Gut Shot for Signal Pest, and a Timely Reinforcements to build his board presence, while winning back some life to go to 23, having taken some Skirge beats. Another Signal Pest came from Scott-Vargas, meaning his attacks would be big ones. Scott-Vargas was happy to trade Memnites for Soldier tokens, keeping the ground safe while commanding the air.

Bland had an Oblivion Ring for Glint Hawk Idol, and a Mortarpod to shoot down much of Scott-Vargas's team. All those creatures he'd deployed meant that Scott-Vargas was low on lands. He'd done everything with just a Plains and an Inkmoth Nexus, meaning that with Mortarpod killing off his offense, he was stuck with little to do.

This was the time for Bland to strike back, but while Scott-Vargas was light on lands, Bland had plenty of them. Scott-Vargas finally found a Mox Opal, but it wasn't even much of a mana source, as he couldn't keep threats on the board while Bland was working his magic with Mortarpod. Scott-Vargas cast an Oblivion Ring on Bland's Oblivion Ring to get back a Glint Hawk Idol.

Finally getting lands, Scott-Vargas cast a Signal Pest. He got to swing in, and Bland offed his Glint Hawk Idol thanks to having two Mortarpods now. Bland's follow-up was Elspeth Tirel, making three tokens, and using one of them to kill off Signal Pest. Scott-Vargas had a Hero of Bladehold, but was staring down a huge squad, which would only grow thanks to Gavony Township.

Tirel made more tokens, and the Township pumped them to 2/2s. Luis cast a second Hero of Bladehold. Bland pumped his team. Luis had a Spellskite, and attacked with both his copies of Hero of Bladehold. That meant there were four 3/1 soldiers in addition to the Heroes attacking.

Bland was facing down an epic attack, but had quite a few soldiers to block with. He couldn't block them all, but he did succeed in killing off one hero, and most of the tokens with some fancy blocking and using Mortarpod. Bland was on just 3 life now, to Scott-Vargas's 11.

Bland was content to sit back on Gavony Township, but didn't have enough blockers to hold down the game, as a timely Dispatch from Scott-Vargas cleared a path.

Scott-Vargas gave a quick wave to his family, who had travelled the twenty minutes or so to come and see him play in the Top 8 of the World Championships, and potentially lock up Player of the Year. Bland smiled, and said hello to his folks who are apparently watching in England, where it was currently a little before 8pm.

Bland had a quick couple of copies of Blade Splicer, but these looked small compared to the start from Scott-Vargas. Two copies of Memnite, Spellskite, and Mikaeus, the Lunarch with two counters seemed like a powerful way to kick things off.

Bland had a Mortarpod, but with Spellskite around, he didn't have a good way of using it, and Scott-Vargas was quick to fire off a couple of copies of Dispatch on Bland's Golem tokens. Bland used a Naturalize on Spellskite, before killing a Memnite once it became clear that Scott-Vargas was going to use Mikaeus to pump himself rather than his squad. 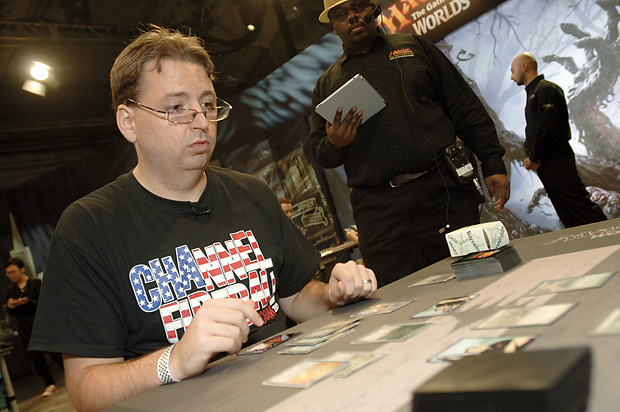 Scott-Vargas, a man known for his puns, must be able to appreciate the concept of "Steeling" a win.

Bland was not out of the game. He cast Elspeth Tirel to make three tokens, and already had a Gavony Township ready to pump them the following turn. Scott-Vargas wasn't able to be aggressive, and looked on as six soldiers and two copies of Blade Splicer came in, growing thanks to the township. He could block a couple of them, but the others were enough to force a deciding game.

On the play for the final game in the five game set, Scott-Vargas started with a Vault Skirge, and had a Glint Hawk Idol and Memnite to follow it. Bland's draw seemed a little slower, with a Birds of Paradise on turn-two. He responded to a Spellskite by casting Gut Shot on Vault Skirge, but was taking some beats, soon on 14 life to Scott-Vargas's 17. A Timely Reinforcements brought him back up to 20, and scored him some blockers.

Luis, as had been a theme in the match, was light on land, casting a Mikaeus, the Lunarch for one, and sighing a little as he saw a Gavony Township from Bland. The English side of the board would be growing faster than the American one, and unless Scott-Vargas could find some more mana, he would be in rough shape.

Bland rumbled in with his soldiers, and Scott-Vargas blocked just one of them with Spellskite. The other two did him in for just four, with Bland holding up his Gavony Township to activate later. He watched an Etched Champion come down for Scott-Vargas, and pumped his team at the end of turn. Bland attacked, and went to pump his soldiers with Gavony Township. Scott-Vargas pumped his with Mikaeus, killing off one Soldier token. A Mortarpod let Bland take down Spellskite, but when Scott-Vargas played out a second Etched Champion, it seemed hard to imagine Bland getting in for more damage on the ground.

Scott-Vargas was on 7 to Bland's 15. Bland had a 3/4 Birds of Paradise now, which, along with Mortarpod, would be his safest path to victory.

Bland attached Mortarpod to a soldier token, and attacked with his Birds of Paradise, pumping them to make it 4 damage. Scott-Vargas was now on 3 life, and Bland had 3 damage on the board with his creatures.