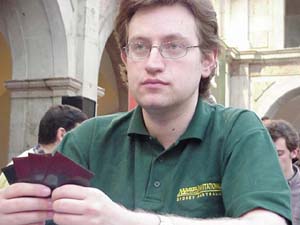 His opponent is no slouch either, with two Pro Tour Sunday performances to his credit, and two Grand Prix Top 8's, Patrick Mello is without question, one of the best players to come out of Germany in the modern game. Working with Team Godzilla (including Kai), and his friends Marco Blume and Dirk Baberowski, the Germans (and Ben Ronaldson) came with a metagamed version of Oath of Druids. None of these players finished outside the Top 32.

This matchup pitched the German anti-Gro deck, against Gro. Based on the results from the Swiss, the statistics say that this should be a 1 - 0 win for Oath, but with un-timed Quarters, this promised to be one of the longest matches in Grand Prix history.

Patrick won the dice roll and decided to go first.

Both players kept their opening hand, and Patrick opened with a Volcanic Island. Alex answered with a Tropical which was promptly wasted and replaced by a Tundra. However in Alex's discard step (having not played a land) he Dazed Patrick's Impulse. Alex though drew a Land Grant off the top of his deck, and despite Patrick's double blue mana, the Land Grant resolved.

Alex tried to encourage Patrick to attack with the Village yelling, "Send in Bobtown" but Patrick just resolved an Oath of Druids instead, drawing a "Who doesn't send him in" by Alex.

Alex next resolved a Meddling Mage and named Powder Keg, before Land granting again for a Savannah to help his double Swords.

Patrick used the Oath in upkeep, and revealed a Spike Weaver, before playing a land and passing the turn. Alex tried for a Quirion Dryad on his turn with swords mana open, and passed the turn to Patrick.

Patrick Brainstormed end of turn twice, before using the Oath in upkeep to put a Spike Feeder into play.

Patrick then wasted the Tundra to deny Alex his Swords this turn, and attacked with the Spike Weaver, first blood to Patrick. He then went for a solid lock, with a Second Oath, before passing the turn. Alex's hopes all rested on Winter Orb at this point, which he drew and cast from the top of his deck, uncontested by Patrick.

Patrick gained four life at end of turn so he could activate the Oath, which he used to get a Morphling. Alex turned to Olivier who was also playing the same deck to tell him, "I'm losing Game 1 here very badly", but then turned back to Patrick, thumped his Orb and yelled, "You'll never tap mana in this town again!"

Patrick attacked again with the Weaver to take Alex down to 14.

Alex untapped, drew and played his only basic Island, before passing the turn.

Patrick again went to attack with the Weaver, only this Time Alex cast Swords making his Dryad big enough to block, or to tap a significant amount of Patrick's mana.. Patrick responded by putting a counter on the Morphling and Fogging twice so the Weaver went to the graveyard instead of leaving the game entirely. Patrick played a Flood Plains and passed the turn.

Alex cast a Merfolk Looter on his turn, which resolved, and in upkeep Patrick sacrificed his Flood Plains for a Land before Oathing up a Feeder which he sacrificed before shuffling it all back together when the Blessing Triggered.

Patrick made the Morphling fly before attacking for four to put Alex at ten life.

Alex looted in his turn, pitching the Werebear. He attacked for four to put Patrick down to a mere 24. Patrick Oathed up Feeder and Weaver in upkeep, and this game seemed to be over... He immediately sacrificed the Feeder to go back to 28. Before attacking in his main phase with the flying Morphling who put Alex down to six before Passing the turn.

Alex drew his card for the turn, and looted away a Flood Plains, commenting "Ooohh la la, I drew something good here" before tapping a land for Blue and casting Gush. He then used his blue mana to Brainstorm, and all the while the Dryad got bigger, but it was irrelevant because of the Spike Weaver. Alex just passed the turn, and Patrick once again abused his Oath of Druids.

Patrick made the Morphling fly and went in for the kill before adding damage to the stack. Alex cast Swords on his Dryad and gained effectively one life. Meanwhile Patrick only had two blue mana untapped, meaning he couldn't kill Alex next turn either.

Alex untapped, Looted and made a Werebear, before allowing Patrick to abuse the Oath once more. Gaining another four life to go to forty, the Morphling attacked Alex down to three. With one turn to find something good, Alex drew his card, activated the Looter then passed the turn.

Patrick untapped, Oathed again to go to 44 life, and again to 48 life. He made the Morphling fly and attack, and added four damage to the stack, but Alex plowed his own Meddling Mage to remain at one life.

Alex again has a chance to somehow come back into the game, but knowing the decklists, it seemed unlikely. This was confirmed when Alex tried to cast land grant by revealing his hand, showing only a Mystic Enforcer and some Counters. The Mystic Enforcer resolved, but was not a long-term solution to the Morphling.

Patrick went up again during the Oath step to 56, and did nothing and passed the turn, to which Alex announced, "What? Who doesn't swing with both guys and kill me?"

Alex passed the turn after Looting, and Patrick gained eight life in upkeep to be at 64.

Patrick still had no Swords for the Enforcer and had to pass the turn.

In Alex's turn he tried to make a Meddling Mage, presumably to name Swords, but Patrick had a Force of Will. Alex, bored of the Oath deck, Shenanigans used his last remaining life point to Force of Will back...

There was lots of friendly banter between games 1 and 2 where Alex defended his decision to not concede, and asked for a good book to read during game 2.

Patrick quipped "I've won a few games after mulliganing to 5, but I don't know about this one"

Once again Alex mulligans a no land hand, and goes to four cards.

Alex started with a Tropical Island, and it was wasted. Alex then played a Flood Plains, which was pretty impressive considering his massive card disadvantage.

Patrick Blessinged back the Wasteland on the next turn, but didn't draw it off the top. 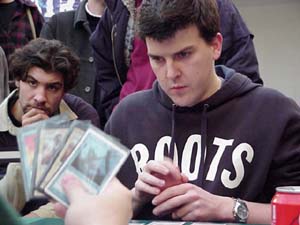 Patrick Mello Alex failed to lay a land for the next four turns, while Patrick developed his board with Powder Keg and Oath, although Alex sacrificed his Flood Plains so he could Brainstorm, and then Daze or Force of Will. He chose the Force of Will and left his land in play and he resolved a Seal of Cleansing on his turn.

Patrick hard cast his Spike feeder on his turn, desperately looking to punish Alex's screw. Alex Gushed on his turn, and then resolved a Meddling Mage naming Oath of Druids, before Cleansing the Powder Keg.

Patrick used Swords to Plowshares on the Meddling Mage, and the quarterback was toast. He then activated the Village and attacked for five to leave Alex on sixteen.

Alex tried for his Quirion Dryad, but Patrick Countered, untapped activated the Village and went in with the Feeder and the Village. Alex Submerged, Patrick Disrupted, Alex Submerged again and Patrick drew the Village off the Disrupt before replaying it and passing the turn.

Alex resolved Meddling Mage on his turn, and named Oath of Druids, But Patrick Pyroblasted it and attacked for five to put Alex on nine.

Alex then resolved a 4/4 Werebear, which would slow the beats from Patrick, and Patrick was forced to make a Powder Keg to deal with it.

Next turn Alex tried for a shiny Mystic Enforcer, but Patrick Impulsed into the Counterspell, and managed to stop it. With the Werebear tapped, Patrick went in for five to leave Alex at four. Alex then dropped a Winter Orb, which bought him a turn since Patrick could only untap either the Village or his only green source. The Keg however detonated for two, and next turn, Patrick dealt the final blow.

A brave and defiant performance from Alex, but unfortunately he was never really in the match.