As always seems to happen at Japanese Grand Prix, the biggest names in the Top 8 had to play each other in the quarterfinals. On one side Tsuyoshi Fujita, the man who helped advance Japanese Magic to the global stage. On the other, Jin Okamoto, the reigning and final APAC Champion, whose near misses at 2001 Worlds and Pro Tour - San Diego earlier this year have marked him as the Next Big Thing. It was also the clash of the mono-color decks. Fujita had decided that Pinpoint Avalanche and Wave of Indifference, his best red cards, didn't warrant messing with his mana base. Okamoto simply didn't have any off-color cards worth playing. He had a couple of duds as a result, but still had enough good cards to make a deck. 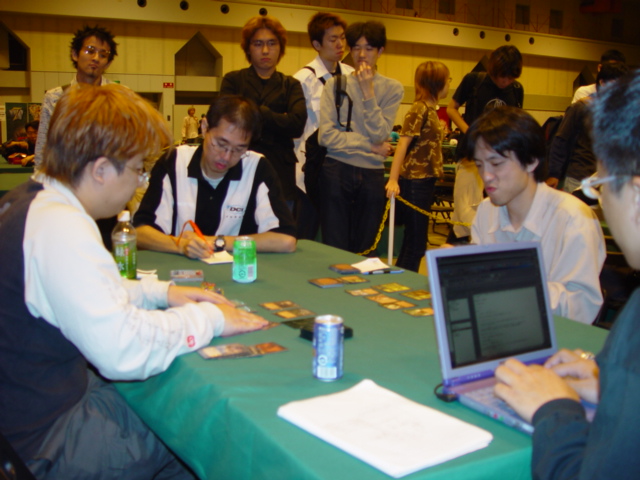 Okamoto won the die roll and led with Festering Goblin. Fujita answered with Birchlore Ranger and suddenly Okamoto didn't feel like attacking. When Fujita smashed in with his 1/1, Okamoto accepted the trade. Fujita brought out the Wirewood Herald. Okamoto made Nantuko Husk. Fujita answered with Wirewood Savage, and things were about to go very, very badly for Okamoto.

His only play was Wretched Anurid. Fujita was happy to draw a card. Then he busted out Snarling Undorak for another cantrip. Okamoto untapped, dropped Shepherd of Rot and swung in. Fujita doubled up on the Husk with Undorak and Herald. Okamoto shuffled his hand around, hoping the Dirge of Dread and Syphon Soul (!!) would turn into something better. He traded the Shepherd and Anurid for Fujita's blockers. The Herald got Fujita Elven Riders. Then Okamoto cast Syphon Soul. Fujita didn't even know it was a card. When he realized what was happening, he laughed out loud. Okamoto just shrugged his shoulders. His deck was awful. He knew it.

Spitting Gourna drew Fujita another card. So did Okamoto's Wretched Anurid. The Husk was taken down by the Gourna thanks to Vitality Charm, and from there Elven Riders made sure the race would go to Fujita.

Okamoto's draw was a little heavier on the beatdown in game two. He started with a pair of Wretched Anurids, and then had Swat ready for Fujita's Wirewood Savage. Fujita was at eleven before he knew what was going on. Symbiotic Elf showed up just in time to make a race of it. Okamoto attacked and brought Fujita to eight, falling to eleven from the insect tokens.

Fujita tapped out for Gourna and passed it back. Okamoto drew Silent Specter. He swung in with both his Anurids and Fujita chose to off one with his Gourna and chump the other, rather than chump them both and keep them around as pain for Okamoto. As it turned out, Okamoto had Crown of Suspicion to take care of the Gourna, and then played a morph creature.

Next turn he unveiled it: Silent Specter. Fujita didn't have any flying defense, and in two turns it took the game.

Fujita had no early action for the deciding game, and Okamoto was again faced with the option of playing out two Anurids. He didn't have much else and Fujita already had a Savage on the table. He went for it. Fujita answered with a morph, and double-blocked when Okamoto attacked with both his creatures. Crown of Suspicion meant both blockers died.

He came back with Elven Riders, then soaked some more damage. Okamaoto played Screeching Buzzard and passed it back. Fujita snuck out a Symbiotic Beast. Okamoto held in a double-take. He had Prowling Pangolin in hand! He couldn't kill Fujita on that turn, so he swung with just his Buzzard. He played the Pangolin, and of course Fujita ate both his creatures, dealing four more to Okamoto. Then he untapped and swung with his tokens. Okamoto was at five. Three of them got through for damage. Then he cast Birchlore Rangers and tapped two more. He smiled as he showed Elvish Warrior. Okamoto extended the hand.

After the handshake, Fujita picked up the Anurid off the table and said: "I love this card!"