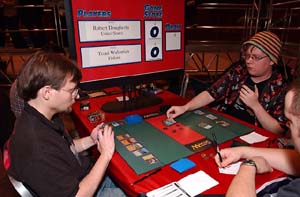 Rob Dougherty is playing "Balancing Tings", a deck designed by a New York area Junior Super Series player. For the past month it has been cleaning up JSS tournaments in the Northeast area, but still hasn't been given much respect. Dougherty contemplated the deck for about ten seconds after seeing it, and decided it wasn't worth considering for the Masters. On the way to San Diego he was on the same flight as Andrew Stokinger, who planned to play the deck in the Gateway. After testing the deck for most of the flight, Dougherty decided it was the right metagame call. This is an interesting story, because many players at Neutral Ground also did not think Tings was a solid, viable deck. Now that it has reached the Top 8 of the Masters, it's certainly going to gain a lot more regard.

The only thing between a Junior Super Series deck and a Pro Tour player running it in the Semifinals of a Masters is Tomi Walamies with Psychatog, one of the surprises to come out of this weekend. The key card in this matchup will be Obliterate. Simply put, Walamies cannot play around this card, aside from holding land in his hand. For Walamies to be successful, Dougherty's Obliterates need to hide in a section of his deck that won't allow them to get into his hand. Otherwise, Walamies must strip them with Duress.

Dougherty won the roll after a stubborn die produced many ties between himself and Walamies. Suspicion rose, as Dougherty sarcastically demanded a DCI investigation of the die. The first few turns saw Dougherty set up with his come-into-play-tapped lands, while Walamies brought out Nightscape Familiar. Dougherty used Fire to kill it off, and deal one point of damage to Walamies. The turn was then sent over to Walamies, who had to spend a significant amount of time thinking. Unlike other matchups, Dougherty's deck could annihilate the board if Walamies took the risk of tapping out. Eventually, Walamies brought out Merfolk Looter, leaving him with one untapped land. The risk paid off, as Dougherty could not capitalize on the situation. 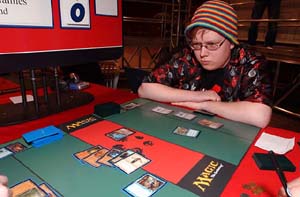 Walamies now untapped and activated his Looter. Regardless of seeing two cards during his turn, he missed his fourth land drop. Dougherty untapped, played a land and said go, and Walamies Recoiled Tinder Farm on end step. Fact or Fiction was added to the stack, which tapped out Dougherty. The piles Walamies presented were Orim's Chant/Nimble Mongoose and Ancient Spring/Archeological Dig/Geothermal Crevice. Dougherty took the two-card pile with the spells. With Dougherty tapped out, Psychatog was summoned, giving Walamies a solid clock. This left Walamies with only one land untapped, and gave Dougherty the best opportunity possible to get his combo off.

However, this wasn't the case, as he simply played a land and ended his turn. Psychatog then attacked, and was joined by Nightscape Familiar. This left him with two untapped islands. Dougherty untapped and drew, and spent a good deal of time thinking through what to do. In the end, he decided to simply say go. Walamies attacked with the Familiar and Psychatog, and Salt Marsh was Iced on end step. This left Walamies with three islands untapped for mana.

Dougherty now went for it. He played Obliterate, wiping away the board. He did not have any mana floating, but did set the board back to a more comfortable position. Terravore came out a turn later, and Walamies did not have an answer for the 15/15 trampling monster.

While shuffling up for Game 2, Walamies decided it was time to get down to business. Did he stare into a mirror and get his game face on? Perhaps he turned his hat backwards? Maybe inside-out like a rally cap? Did he turn his hat backwards like Sylvester Stallone in "Over the Top"? You know. "It's like a switch. I get into the ZONE!" Nope.

He buttoned up his shirt.

I didn't think this was too relevant, but he asked me to include it. There you go.

A first turn Duress showed Walamies a hand that contained Dodecapod, Mana Short, Orim's Chant and lands. Walamies forced Dougherty to discard the Chant. Psychatog came out on turn three, and it started its attack soon after. Walamies played Fact or Fiction, revealing five action cards. Dougherty separated the piles into two Repulse/Counterspell and two Memory Lapse. Walamies took the three card pile. The 'Tog continued to swing, and Dougherty played more lands, waiting for the pieces to come and the moment to present itself.

Temporal Adept was summoned and resolved, and Dougherty continued to play lands and end his turns. A Walamies Fact or Fiction was Memory Lapsed, but Counterspell was added to the stack. This allowed Fact or Fiction to resolve. Dougherty separated the piles into Shadowmage Infiltrator, Underground River, island and Duress, Fact or Fiction. Walamies took the three card pile. He then untapped and went to work pumping up the Psychatog to lethal damage and attacked, tying the match at one game a piece.

A turn two Walamies Duress revealed Dougherty's hand of Archeological Dig, Obliterate, two Balancing Act, Nimble Mongoose and Syncopate. Dougherty lost the Syncopate. After a few turns passed, Walamies played Fact or Fiction. The piles presented were Fact or Fiction, Merfolk Looter and Nightscape Familiar, island, Salt Marsh. Walamies took the three card pile. He then untapped and summoned Shadowmage Infiltrator. Dougherty opted to wait to get more setup time, and did not Obliterate. Johnny Magic did what he does best and gave Walamies an extra card, and he was joined by a Nightscape Familiar. 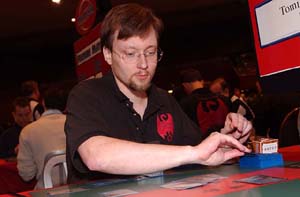 After a few minutes, Dougherty played Mana Short on end step. Walamies Memory Lapsed it. Dougherty took his turn and decided it was time to go for it. He sacrificed some lands and played Mana Short on main phase. Walamies responded by tapping out, and Repulsing his Nightscape Familiar. Dougherty then sacrificed all his lands, and played Balancing Act, leaving two green in his pool. He then brought out Nimble Mongoose, and took a point of burn. This was obviously not the worst case scenario for Walamies, since a Terravore would have likely been the end of the game. Even though the current position was not a good one to be in, he did have Nightscape Familiar to block.

This left Walamies tapped out, and Dougherty played a second Balancing Act. His only permanent was Nimble Mongoose, and Walamies lost a land and the Familiar. He followed up with Merfolk Looter. The next turn saw Walamies play Psychatog, which was good for plenty of reasons. Besides the fact that Walamies had twenty cards in his graveyard, Psychatog could strip Walamies of all the lands in his graveyard, and make Terravore smaller if it ever hit the table. The Psychatog attacked for a point of damage on the following turn, and was joined by an Infiltrator. A few turns later, Psychatog became huge, and the game was over.