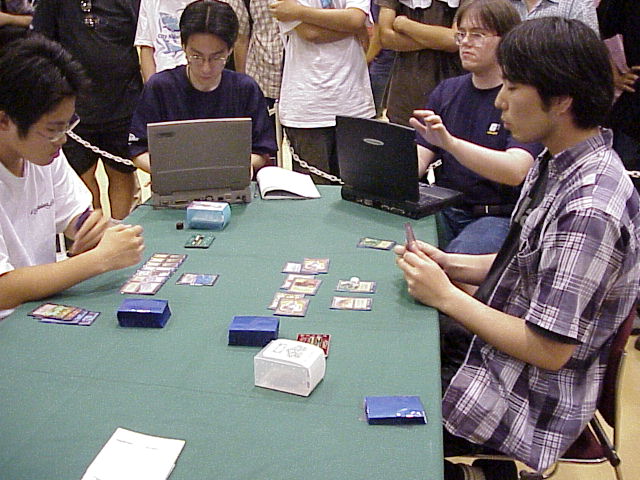 Grand Prix don't come any bigger than Kobe. It's true. More than two Roman phalanxes worth of players walked through the door to take a crack at becoming champion. And anyone who makes it to a Top 8 at an event of this size has every right to consider themselves a champion. Both Osaka's Shuhei Nakamura and Nagoya's Ryo Ogura have had numerous major victories under their belts, but a chance for a record-breaking Grand Prix title would be a feather in any player's cap.

Nakamura's red/green "Rocket Boots deck" deviated from PT: Tokyo's Terrorizer in only a minor fashion. The deck's key asset, pure aggression, was unmatched by any other in the field. Ogura's red/blue/white deck also soaks itself in aggression with Galina's Knight, Meddling Mage, Fire/Ice, Lightning Angel, and Urza's Rage, but its countermagic and tempo concessions clearly put the deck into the control seat.

Nakamura won the roll to go first and kept his hand. Ogura's distaste was evident as he mulliganed to 6. Despite going first, Nakamura failed to drop a threat on turn 2. A Galina's Knight spelled more apparent bad times. But Ogura's painlands, a Shivan Reef and Battlefield Forge ate away at his life as he played a Goblin Legionnaire on his turn. This played into Nakamura's hands as he threw a Scorching Lava at the Legionnaire. Ogura traded a life point to throw the Legionnaire at his opponent. 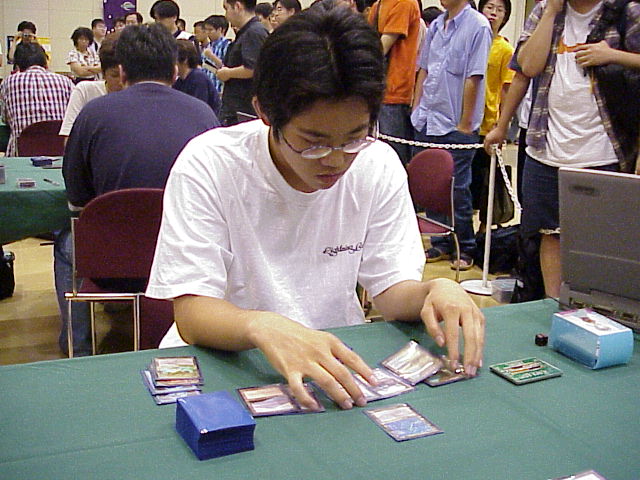 Ogura's willingness to sacrifice his life for damaging Nakamura proved to be his downfall. Nakamura followed up with a fresh Raging Kavu that attacked past the tapped Galina's Knight. After that, Ogura cast another Legionnaire which blocked the Raging Kavu and was sacrificed to damage Nakamura. A successfully cast Skizzik waded its way through the Galina's Knight to trample Ogura down twice to 8. Ogura fixed the Skizzik's wagon with an Urza's Rage, but his lack of painfree red mana continued to drag him down.

Nakamura played a Thornscape Familiar that attacked. Fearing a Raging Kavu free to have its way with him, Ogura let the Familiar slide through to drag him to 8. Ogura passed the turn, and a second Raging Kavu greeted Nakamura's side of the table. Unable to cast an answer, Ogura's Knight blocked a Raging Kavu and he fell to 3. As soon as Ogura looked at his next card, he scooped.

Ogura's advantage by playing first turned out to be fleeting. Nakamura played a Thornscape Familiar on his second turn. Ogura threw up a Goblin Legionnaire who let the Familiar walk past. Nakamura played a Keldon Necropolis on the fourth turn. The Necropolis was bad news for Ogura, who could see the efficiency of his future burn spells slip away. 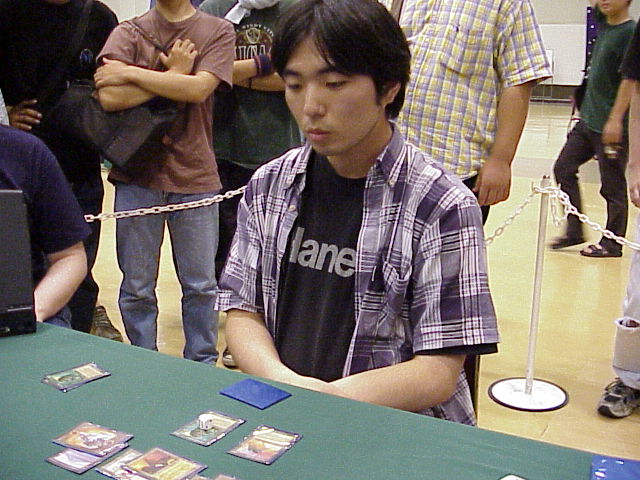 Ogura cast a Thornscape Battlemage with red kicker targeting the Legionnaire, and Ogura paid a red to make the Battlemage pay for his effrontery. Ogura bought a little time by playing a Galina's Knight and Absorbing a Kavu Titan, but Nakamura's second Kavu Titan made it to the table, kicker and all. Ogura drew a card, nervously sorted his lands in play, and passed the turn. The Kavu Titan pounded Ogura, bringing him to 12.

Nakamura's threats continued to accumulate with a new Thornscape Familiar. Ogura froze the Titan with Ice, but allowed Nakamura's Familiar to slide by in fear of the Necropolis. Finally the beleaguered player threw a wrench in Nakamura's offensive clockwork, Jilting to bounce the Thornscape Familiar while burning the Kavu Titan, putting it within Urza's Rage range. The Necropolis threw the dead body at Ogura. Ogura's satisfaction at a clean board and his chances for advancing were wiped out after not drawing an answer for a 6 point Ghitu Fire.