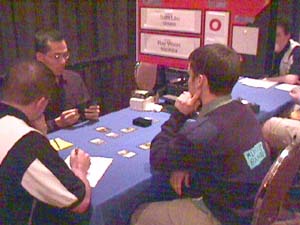 This match saw former National Team Member "Superman" Sam Lau square off against young up-and-comer Ray Weiss from Manitoba. Lau's experience was evident. His face was pure serenity. Weiss, on the other hand, was jittery and boasted a huge grin. He was enjoying his success almost as much as the matchup. The Squirrel-Opposition deck in his hands was the same design as Eugene Harvey's deck that taught Psychatog so much respect at US Nationals.

Things got underway at an amble. Weiss opened with Bird and Call of the Herd while Lau made Nightscape Familiar. Weiss dropped Opposition and held back, tapping Lau's land. Lau waited and Repulsed the Call token at the end of Weiss's turn. Then he tried to hold stop a Mongrel with Memory Lapse, but Weiss had Circular Logic to force it through. That left him empty-handed, and Lau freed up his mana with Recoil on the Opposition.

The Call was flashed back, and Lau made a second Familiar. But Lau was shy on tools, with just a Recoil in hand and more lands to mock him. Looter resolved, and Lau grimaced. He drew Darkwater Catacombs. He made motions to suggest he had nothing but gas in hand. Weiss untapped and Looted. He turned up another Call.

Lucky for Lau he could wait behind his army of regenerators. Weiss's lack of options meant he wouldn't be forcing Lau to tap out with a big attack, then busting out something backbreaking. Lau waited on his Recoil. Soon he would draw something. He had to. He didn't have much time. Weiss Looted into another Looter, then dug up Deep Analysis. Lau had to let it resolve. Weiss reused it and was at thirteen. Lau, with ten land already on board, drew Underground River. Weiss came down with Opposition.

Weiss locked up two islands and a Salt Marsh, then at the end of Lau's turn left him with just one black mana available.

"Here, let me help you out here. Since you are so sporting, I'll group my lands together, effectively helping you beat me." - Sam Lau 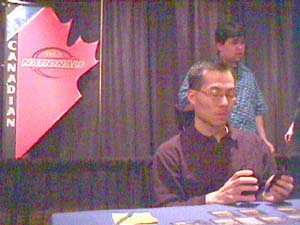 Weiss untapped, tapped Lau's remaining black mana, then destroyed all three Familiars with Fire/Ice and Flametongue Kavu. He tied Lau's mana up as best he could, but Lau was able to afford the Fact or Fiction. The cards were two Circular Logics, Salt Marsh, Psychatog and Counterspell. Lau got Counterspell, Psychatog and Salt Marsh. He had three mana open at end of turn. Weiss untapped, locked him up, and swung for the win.

Lau's opening hand was two Recoil and Memory Lpase, not gangbusters but not terrible. Weiss led in with Llanowar Elves, and when Lau's Lapse hit his Merfolk Looter, added Birds of Paradise. Lau played another Salt Marsh and passed it back. Weiss's next play of Squirrel Nest was music to his ears. He bade his time to Recoil, even letting Merfolk Looter in. His attempt was Gainsaid.

He untapped with every intention of just busting out the second, but Nightscape Familiar convinced him to play Fact or Fiction while the getting was good. His options were Fact or Fiction and Psychatog, or Fact or Fiction, Ghastly Demise, and Island. He scored the larger pile. Weiss's only rejoinder was Deep Analysis.

Now Lau was riding high. He worked another Fact or Fiction, this time getting Upheaval, Force Spike, and Underground River over Duress and Familiar. Weiss got a second Squirrel and swung in. He brought back the Deep Analysis for another round. His Looter fell to Lau's Demise, and then they played that drama again.

Lau got another Familiar. Weiss got another Nest, and brought it out on Shivan Reef. Lau responded with Recoil, sending them both to the graveyard. Lau threatened to try something he described as "just for fun", his hand hovering over four lands, but he thought better of it. Weiss threw away two squirrels for three damage, then played another Analysis.

And then came Opposition. Lau was left with just two islands untapped on his turn.

Lau really needed a Recoil. Flametongue Kavu removed one of the Familiars. The next turn another did the same, while Memory Lapse chuckled in Lau's hand. Next turn the whole gang crashed Lau's party. 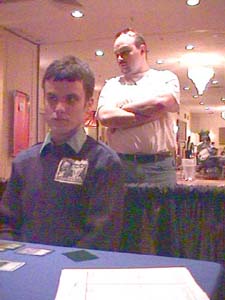 Lau kept a gassy two-lander for Game 3, featuring twin Counterspells. He drew successive land and was in business. Weiss had meanwhile brought a pair of Birds of Paradies into play. That let him force through Squirrel Nest with Gainsay. Lau untapped and ripped Engineered Plague. He wasted no time putting it into play.

Weiss got in therre with Opposition. Lau was far from delighted. With his three available mana he made a Psychatog, only to get stomped by Flametongue Kavu. Psychatog went to the graveyard. His mana even more constrained, Lau was happy to have a Ghastly Demise to take out the Flametongue. Weiss replaced it with two mongrels.

Lau tried to buy time with Psychatog. Weiss got Call of the Herd and kept the lock on. Lau floated four mana and played Fact or Fiction, seeing three land, Memory Lapse and Recoil. Weiss put the Recoil by itself. Lau put it in the graveyard. As if things weren't bad enough for Lau, his Duress put Deep Analysis in the graveyard.

Weis swung for seven, and played Deep Analysis and Wild Mongrel. Lau tried to be coy, but without a way to stop Opposition, the game ended on Weiss's turn.