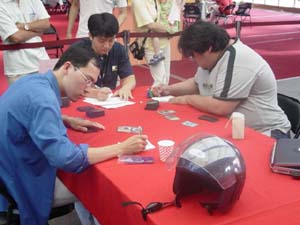 Hsia is playing the tournament's most creative deck, a blue-white-green control deck that takes unfair advantage of Living Wish and Hunting Grounds. Song is running the most popular deck: Quiet Speculation. A traditional Blue-Green Madness framework houses the ability to tutor up three 6/6's, or if needed, Ray of Revelation, Krosan Restoration and Deep Analysis.

Hsia won the die roll, a huge advantage in this matchup. Song opened with Rootwalla, but had no pressure besides that. Repulse kept it off the board and allowed Hsia time to Fact or Fiction, scoring lands over spells, and then again, getting Hunting Grounds and Counterspell. He was riding high.

Song's Rootwalla continued to Work. Circular Logic stopped Repulse, but it seemed Song wasn't even in the game. Soon, Living Wish fetched a Phantom Nishoba. Song's second Rootwalla brought it out for free, and Opposition earned a free Mystic Snake.

The Nishoba only had to hit once to convince Song it was hopeless. 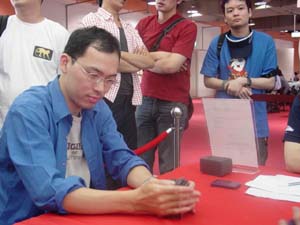 Hsia was forced to triple-mulligan in Game 2, and Song played a relentless draw of Basking Rootwalla and Merfolk Looter. He tried Quiet Speculation, but was stopped by Counterspell. Another Looter joined his brigade, and he started to tear through his deck.

He was swinging for three against Hsia's board of lands. Repulse was stopped by a Logic through a Looter. Genesis met the same fate. Hsia's emergency Mystic Enforcer could only trade with Rootwalla. Then Song turned up a Quiet Speculation that got Analysis, Roar and Ray of Revelation. Hsia hoped for a white mana to go with his Wrath, but it wasn't there.

Hsia's going first in the deciding game had him feeling confident. He Repulsed an early Merfolk Looter, but left himself unable to stop Squirrel Nest. Fact or Fiction overloaded his hand and he pitched a land. Song got his Looter back and got to work. 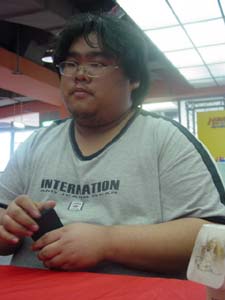 The Nest was a big enough threat to warrant Hsia going to his board for Aven Cloudchaser with Living Wish. Song baited him with Aquamoeba, which got Excluded, and cleared the way for a second Nest. Hsia played his Cloudchaser to slow down production, but he was on a short clock. Song was Looting away Rays of Revelation in a bid to get to the goods.

Hsia's Fact or Fiction got him Hunting Grounds, and he played Living Wish to get the Nishoba. He started hitting. Song minimized the pain with assorted chump blockers, each time taking the Nishoba down a peg and growing his army of squirrels. All this while holding Seedtime and Circular Logic.

A Tangle from Hsia caught Song off-guard. It meant that he had less time than he thought. If only he knew just how much less. Hsia Repulsed his blocker at end of turn. Song tried a Seedtime. Hsia dropped Mystic Snake into play. Song tried a second Seedtime. Another Snake. The was was clear for a fatal attack, putting Hsia in the semifinals.