Ironic that I would get to cover the Tempered Steel on Mono-Red quarterfinals matchup...

This weekend had already seen a series of historic moments. The newest class was inducted into the Hall of Fame. Team Channel Fireball dominated the tournament, cementing this as one of the most dominating performances by a team ever at a Pro Tour. Conley Woods won every single match that he played, only losing when he chose to concede to his teammates, making it one of the most dominating performances by a single player in Pro Tour history. David Caplan and Jun'ya Iyanaga made both the Top 8 of Worlds and participated in the Magic Online Championship. They had a truck that served cupcakes...This Worlds has been amazing. 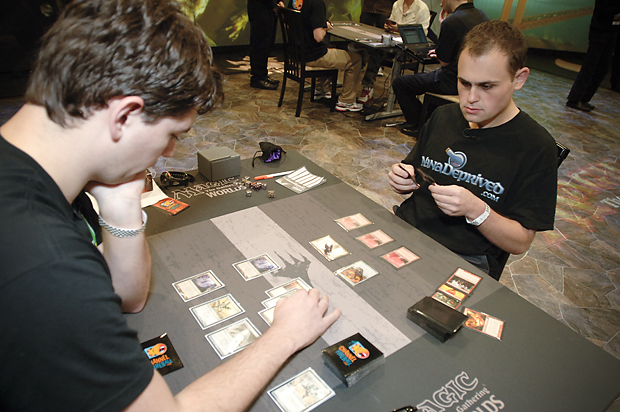 Both players are representing big accomplishments. While Paulo Vitor Damo da Rosa is one of four Channel Fireball players in the Top 8, David Caplan found his way onto the Sunday stage thanks to the Magic Online Championship.

Playing for the right to call themselves Champion of the Coolest Worlds Ever in this quarterfinals match is Paulo Vitor Damo da Rosa, the Brazilian powerhouse running the Channel Fireball Tempered Steel deck that his three teammates in the Top 8 are also running. His opponent is none other than MOCS competitor David Caplan, running Mono-Red.

Damo da Rosa started with a first-turn flurry of action, playing a Memnite, Signal Pest, and Mox Opal. Caplan wasted no time in paring the army with a Gut Shot on the Memnite. This also had the massive benefit of clearing the way for his Stromkirk Noble. Unfortunately for Caplan, Damo da Rosa's deck had no shortage of creatures, and the path quickly clogged again. A Glint Hawk Idol, putting Damo da Rosa back into metalcraft for his Mox, now stood guarding the way. Caplan understandably didn't feel like just killing off his own Noble and simply played a Shrine of Burning Rage before passing the turn.

Damo da Rosa sent his first attack in on the next turn, playing a Signal Pest to turn on his Idol and activating his Nexus. With only a Signal Pest for defense, Caplan found time to attack, sending his Noble and a freshly-cast Chandra's Phoenix past the Pest. Damo da Rosa took care of the Phoenix with his last card, a Dispatch, before it could do any damage, making sure it would never return. Damo da Rosa made a Memnite on his turn and attacked with his team, putting Caplan to 9 life and five poison. Caplan could only recruit another Noble, attack with his first, and pass the turn. 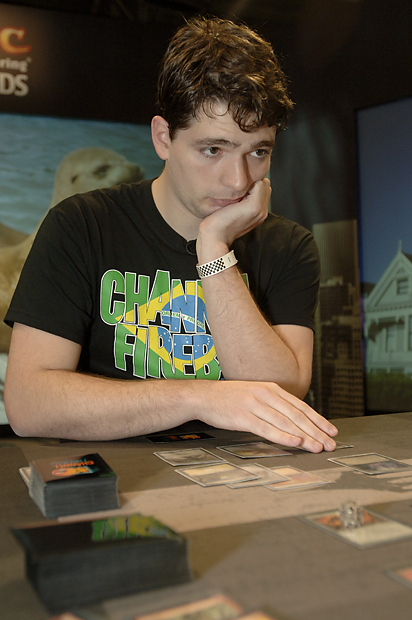 Damo da Rosa isn't letting up in his first game against Caplan.

Damo da Rosa drew his card for the turn, a second Inkmoth Nexus, and played it. He activated the first one and sent his whole team. Caplan went into damage-control mode, Incinerating one of the Signal Pests and shoving his Noble in front of the Memnite. He dropped to 6 and went up to 7 poison. The next attack caused him to pop his Shrine to kill a Nexus in order to stay alive. After that, he had no answer to the other, falling victim to poison on the ensuing attack.

Both players reached for their sideboards after the first game. Caplan had a few Arc Trails, Dismembers, and a Manic Vandal that he would probably consider bringing in, while Damo da Rosa had Spellskites and a Timely Reinforcements that would most likely find their way into the main deck.

Caplan got on the offensive first with a Goblin Fireslinger and a Grim Lavamancer. Damo da Rosa showed his sideboard cards early, with a Spellskite coming down after an Origin Spellbomb. Chandra's Phoenix for Caplan took the fight to the skies, flying over to drop Damo da Rosa to 17. A Glint Hawk Idol put Damo da Rosa into metalcraft, enabling him to remove the Phoenix with Dispatch. Caplan simply exiled it and passed his turn. When Damo da Rosa went to activate his Idol, Caplan used Dismember to force Damo da Rosa to redirect to his Spellskite. With the Spellskite gone, Caplan took care of the Idol with a Galvanic Blast, leaving Damo da Rosa with a lone Spellbomb. He cracked it for a Myr, rebuilt with another Idol, and passed the turn. Caplan presses on with his Mono-Red deck.

Caplan's Goblin Fireslingers and Grim Lavamancer were going to work on Damo da Rosa. They took a slight break when Damo da Rosa tried to drop a Tempered Steel on his turn, with the Grim Lavamancer taking out Damo da Rosa's Myr while it still could. The Steel still made the Idol into a veritable threat, though, and it began taking four point chunks out of Caplan's life total. Things continued to tick down for Damo da Rosa, though, as Caplan's creatures inched Damo da Rosa closer to death. One turn before he would die to Damo da Rosa's creatures, Caplan ended everything with a Volt Charge and a couple more activations from his little men.

Damo da Rosa started out with a Vault Skirge and Glint Hawk Idol in the third game, while Capan pinged Damo da Rosa with a Goblin Fireslinger to set up a Stormblood Berserker. Damo da Rosa turned on his Idol with a Spellbomb, allowing an attack for two, as well as putting him in metalcraft to Dispatch the Berserker. Caplan took him right back out of metalcraft with his lone Manic Vandal to smash the Idol. Damo da Rosa rebuilt with a Memnite and a Myr from his Spellbomb, causing Caplan to reduce them one more time with an Arc Trail, killing the Skirge and the token. Damo da Rosa found a Spellskite to protect his team finally, and it ate a Dismember upon arriving, but it was a little too late. Caplan began to attack with his Vandal and a Phoenix. When Damo da Rosa made a Hero of Bladehold, things looked much better for him, though Caplan was able to add a fourth counter to his Shrine of Burning Rage with a Spikeshot Elder and killed the Hero before it could attack.

Damo da Rosa went into the tank, eventually coming up to play an Origin Spellbomb and pass the turn. Caplan used his Spikeshot Elder to clear the way for his team, killing the remnants of Damo da Rosa's machine army. With the path clear, Caplan started his advance. Damo da Rosa saw the writing on the wall and scooped up his cards, moving them to game four.

"Man, that Green-White deck looks like a nightmare. I don't want to have to play against it. I mean, Gut Shot, Mortarpod, Celestial Purge...literally everything," Caplan sighed as the players shuffled for their fourth game.

"That's okay, you won't have to worry about it," Damo da Rosa replied with a cool smile.

As the cameras closed in to watch what may be the final game, Caplan scanned around to comment, "That's a lot of cameras..." 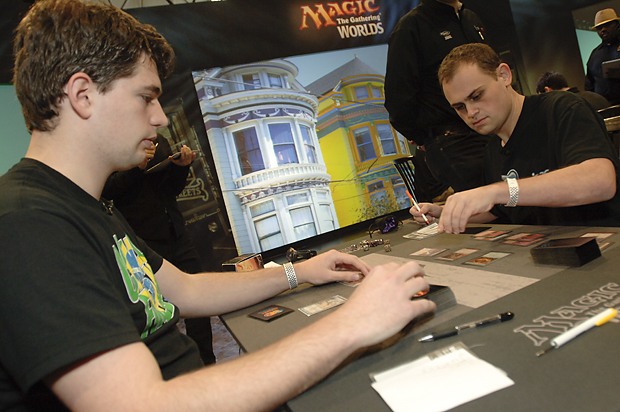 The Pro Tour mainstay has his back against the wall. Could the Magic Online Championship player break through to the semifinals?

Damo da Rosa started slow with a first-turn Origin Spellbomb that he cracked to draw on the second turn. Meanwhile, Caplan made a pair of Goblin Fireslinger s. Damo da Rosa was stuck on two lands, and couldn't accelerate anything out, putting him deep into a hole early. On the other side of the table, Caplan worsened matters by recruiting a Pair of Chandra's Phoenixes. Damo da Rosa tried to help his mana situation with a Mox Opal and a Glint Hawk Idol to turn it on, but Caplan used a Gut Shot to kill the Memnite, taking him back out of metalcraft. When Damo da Rosa made a second Idol to get back into it, Caplan used a Manic Vandal to take him right back out, though not before Damo da Rosa got to use it to Dispatch one of Caplan's Phoenixes.

Damo da Rosa had to think. He was stuck on two lands and one artifact from metalcraft for his Mox. First up was a Spellbomb to get him back into metalcraft. When a Vault Skirge followed, and it became clear that Damo da Rosa wouldn't be able to cast a Timely Reinforcements, Caplan, showed him the Incinerate that would finish him off on the following turn. Damo da Rosa nodded, wished Caplan luck, and picked up his cards.