Quarterfinal: Something to Prove

Ruel has something to prove. He had been listening to the pregame commentary of Mike Flores and Randy Buehler running him down for missing the From the Loam engine. Antoine took umbrage at the suggestion that he somehow missed the powerful card-drawing engine.

"Of course I knew about the From the Loam," he said. "I chose to play my deck instead. Loam is too slow. is such an important card. With you can always play on turn four and have to counter anything. Their cards take three turns to set up."

Antoine's opponent was Tsuyoshi Fujita playing Boros Deck Wins - something of a hybrid between Red Deck Wins and PT Jank. Tsuyoshi was playing in his second straight Top 8, and the third Top 8 of his career. Each time he has gotten this far in the past it has resulted in a loss in the finals.

As the two friends searched for a die to determine who would play first, I commented that I was surprised they weren't going to Junken - the Japanese name for Rock-Paper-Scissors. Ruel shook his head emphatically, "No. Not against the Japanese. Olivier told me that he lost a couple of matches just because he lost Junken to the Japanese."

It was one of the most tense die rolls in Pro Tour history, with each player sitting on the edge of their seats. Both players rolled a 5 and there were groans on each side. Tsuyoshi comically slumped to the table when he lost the follow-up roll while Antoine beamed with genuine relief.

"Going first in Game 1 is soooooooooo important in this matchup." 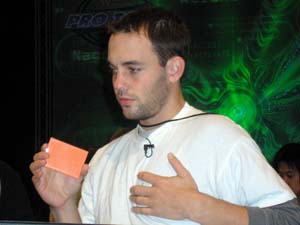 "Seventeen," answered Fujita and played Isamaru. Ruel cast which dropped in the yard. Fujita got in for two and drew a "wow" from Ruel as he dipped to 14 from another fetchland into Sacred Foundry. was the result and Antoine ed it end of turn.

Antoine scuffled for lands and one of his lands was . One of the hallmarks of past incarnations of RDW was Wastelands and Ports. Ladies and gentlemen, I present to you . The Energy Flux on wheels took the Synod out of the picture.

Fujita played out a flurry of spells with his opponent unable to offer resistance. and Lightning Helix took bites out the Frenchman's life total. on Kataki allowed Ruel to use his Vault to play Tog, but Fuita was able to finish him off with an alpha strike and another Lightning Helix.

"That is the only way I can lose going first," clucked Ruel. At least he would get to play first in Game 2 as well.

Antoine sided in his Darkblasts, , s, Meloku and . He took out much of his pricier stuff including his , , and . He also took out a couple of s.

Antoine mulliganed a five-land, two-cantrip hand. His second hand featured four lands, , and . Fujita started the game at 18 for Isamaru. Ruel ed a turn-two and Fujita took that opportunity to drop Ruel to fifteen with .

Kataki was d on the next turn and an Imamuru ed. There was more one-for-one card exchange as were ed. Fujita continued to peck away with . He also used on Watery Grave - which Ruel had paid two for to bluff spells.

prompted a Lightning Helix and Ruel took over . With the purge cleared, Ruel could finally play the Tog that had been looking for an open window to see play. After one attack from the Tog, the score was 19 to 6 in Fujita's favor. Fujita poked with and Ruel fell to 5. He untapped and put a third in the bin, dropping Ruel to 3. Fujita had four lands and one more would start a parade of Bolts.

Ruel had to step up his timetable and cast Fact or Fiction end of turn. He did some Tog math and took the three-card pile which gave him exactly enough force to put behind the Tog to go to Game 3. 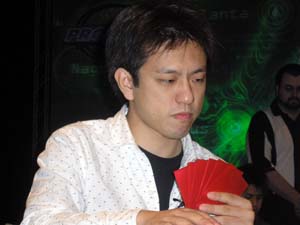 "Play or draw?' asked the table judge and Fujita laughed and pointed at himself.

"I'm not good enough at this game to make any assumptions," said the judge.

Ruel shrugged, "I would hope for your sake you are good enough to know he has to play."

Ruel was really impressed with Tsuyoshi's build and told him so, "In Columbus RDW was not so good. I mean Shuhei lost to Canali. This tournament you lose to nothing. Do you have any bad match-ups - beside Tog?"

Both players led with fetch lands. Fujita cracked his end of turn and Ruel smiled as he picked up his score pad, "Seventeen?"

Fujita cracked another on his next mainphase but again only took one to find to accompany his Sacred Foundry. came into play. Ruel d and passed his next turn with

available - and used it to counter Kataki.

and a both resolved on the next turn and Ruel was at twelve by the time he broke a fetchland end of turn for . Legionnaire was ed on the following turn and Tsuyoshi threw it at Ruel. took out a but did no bonus damage.

Ruel played Tog with two mana up and was able to cast and . The score was 17 to 8. The Lions stepped in the path of the Tog.

dropped him to 6 but the game was not going to go on much longer. Ruel was holding Fact or Fiction. He offered Fujita an array of , Meloku, Darkblast, , and . Ruel was offered a choice between and the remaining four cards. Ruel took the big pile. Darkblast killed the wizard and Ruel had more than enough fuel with in play to make him go lethal.

It was Fujita's turn to groan at his cards and shuffle up for six new ones.

"Seventeen," that should be the name of Fujita's deck since he says that almost every turn one. was the result this time. Antoine grimaced as he led with a pair of artifact lands. He had a but Fujita was content to leave one mana up to each turn.

Fujita's Lavamancer was killed with . Antoine untapped into an early Tog. Fujita fired off a at the French player and put out Isamaru. Ruel attacked for one and played another Tog.

Ruel's prediction turned out to be half-right as Fujita played right into . Fujita wasn't quite ready to concede but he did give Ruel the 5-0 split on Fact or Fiction. The end was inevitable.

"What did you side out?" asked Ruel after the formality of sending in a Brobdignagian Tog. 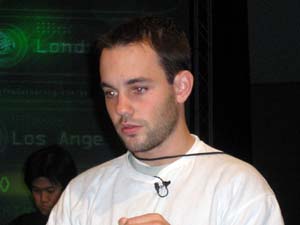 Antoine had his eyes fixed on the semifinals after dispatching Fujita.

Fujita bashfully showed him three lands and four that had stepped aside to make room for three Dragons and four .

"I did the same thing against Nicolai in San Diego," nodded Ruel. "I had 16 lands in my main deck but I sided out two lands to get in some more spells against his deck. I got perfect mana each game but he still destroyed me."

It turned out that while Fujita slept last night, he had Osamu Fujita and Masahiko Morita testing for him. "This morning they said to me, 'you can't win, dude.' "

The matchup was even worse than Morita and Osamu originally thought since they never tested with Ruel bringing in . With there was an almost zero chance of Tog ever getting d.