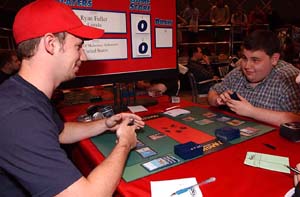 Ryan Fuller came to San Diego for the Masters Series (and the Pro Tour). The latest combatant was Steve O'Mahoney-Schwartz, who brought a red-green beatdown deck into their Masters quarter-final battle. OMS ran the table in the Gateway to grind his way into this event and didn't stop there as he stomped his way through two rounds of the masters itself. Fuller is running the blue-black Psychatog control deck that was by far the most popular in the field, and that Steve-O has already beaten on multiple occasions this weekend. Fuller's version is set up much better against red-green than most Psychatog decks, though, as he has both Force Spike and Aether Burst in the main and both Hibernation and Slay in the sideboard.

OMS knew the Spellbane Centaur that was in his opening hand would be amazing against all Fuller's bounce if he could just get it into play. He decided to do nothing once he got four mana into play just so he could Ice two of Fuller's lands on Fuller's turn and make sure the Spellbane couldn't be countered. That negated both an Aether Burst and a Repulse and OMS's elephant tokens were very happy about it. Soon three elephants were staring across at pair of Psychatogs and Fuller's pace of play had slowed down to a crawl. Even Steve-O's brother Dan gave up and wandered away to watch the other matches! Eventually, Fuller decided to serve with one of his 'Togs. 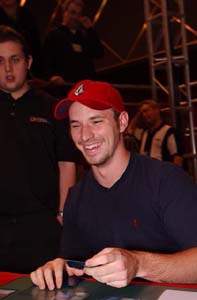 With six cards in his hand and eight in his yard, Fuller could make his Psychatog 14/15 and OMS was at 15. OMS knew Fuller had an Undermine in his hand and Cephalid Coliseum in play and had to be worried about Fact or Fiction adding cards to the system as well so there as no question he needed to block. The real decision was whether to chump with Bird or try a real block. OMS lined all three of his elephants up to block the 'Tog, starting the process of whittling away at Fuller's resources. Fuller wound up using his Coliseum, discarding three additional cards, and going down to one card in his graveyard in order to wipe out all the elephants, survive a Fire, and live to tell the tale. Fuller had a Fact or Fiction ready to refuel his Psychatogs, but OMS was able to respond with Urza's Rage and force Fuller to discard the rest of his hand and lose the rest of his graveyard to hold onto his 'Tog. Fuller wound up with two lands and a Memory Lapse from the Fact of Fiction, with a land and Psychatog #3 headed to his graveyard.

OMS drew and played a Flametongue Kavu, which Fuller lapsed. The Lapse seemed like it was merely prolonging the inevitable, but Fuller topdecked Predict! The crowd laughed, OMS called Fuller something unprintable and suddenly Fuller had a full grip of cards and no Flametongue coming down against him. OMS was pretty much out of gas at this point and Fuller was still at a very safe eighteen life. It was all over for the good guys except for the chump blocking. 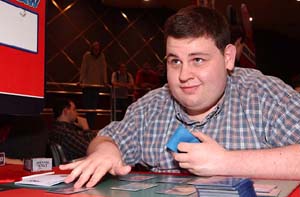 Steve led the crowd in cheers when Fuller took a mulligan before game 1, then led with a Bird. Fuller played a Salt Marsh so OMS was able to play his Spellbane Centaur on turn 2 without worrying about Force Spike. Fuller had a Slay ready to dispatch it on turn 3, but by then OMS had a second one. Fuller did find a Psychatog, but with Repulse and two Aether Bursts sitting in his hand, worthless, he was forced to leave the 'Tog on defense and watch as OMS played out a Shivan Wurm (bouncing his Bird). Of course, like any good villain, Fuller wasn't going down that easily. He drew Slay off the top and nailed the Centaur. That allowed him to Repulse the Wurm before OMS could play out Centaur #3, trapping those two Aether Bursts in Fuller's hand. Now that he was at threshold, Fuller could use his Cephalid Coliseums to go digging for yet another Slay or perhaps a Hibernation. Meanwhile his 'Tog kept getting scarier and scarier. In fact, the 'Tog was already big enough that when he served, OMS felt obligated block with Shivan Wurm. That shrank Fuller's graveyard by 12 cards, but Fuller's deck is remarkably capable of putting more and more cards into the bin. OMS served with his Centaur and Fuller then counterspelled both a Bird and an Ice. None of that would matter except that Fuller had yet another Fact or Fiction. It gave him just enough cards to finish off OMS by discarding his entire hand and removing all his cards from the graveyard.

You've got to hand it to Fuller - even though the crowd is usually rooting against him, he still manages to play nearly flawless Magic. Nothing phases him ... nothing even wipes the smirk off his face.